Does anyone recognize this piece?

Does anyone recognize this piece?

I picked up this piece the other day. It looks very familiar, to me.....but I can't figure out who made it. I've looked through what few books I have on studio ceramics / pottery, but have found nothing. Unfortunately, it's not signed.  It's a large piece, measuring approximately 24" wide x 14" deep x 12" tall. 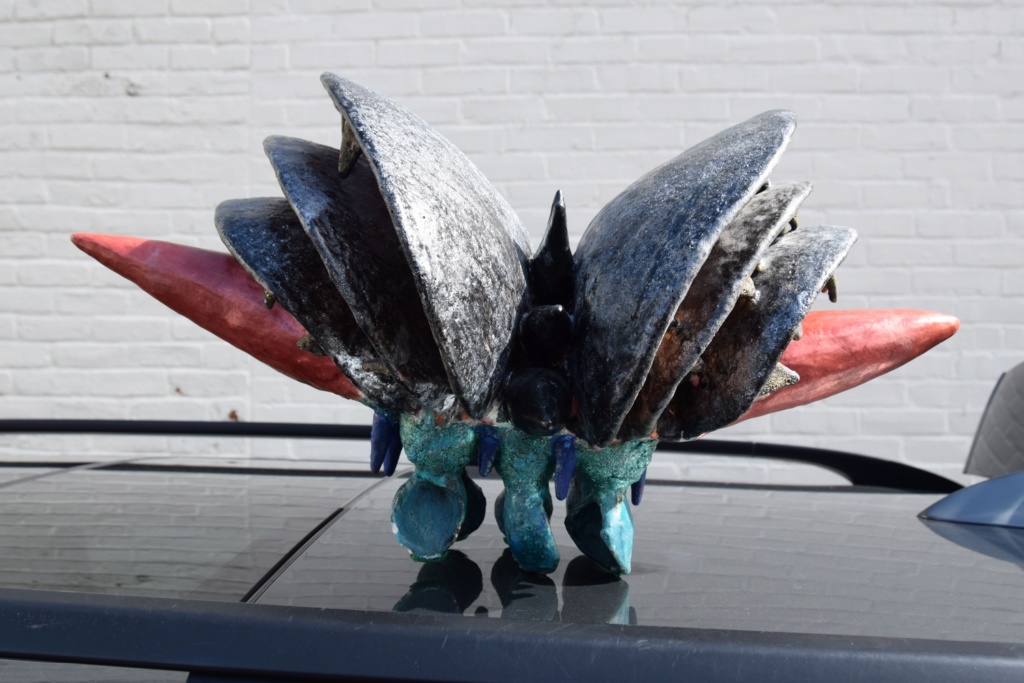 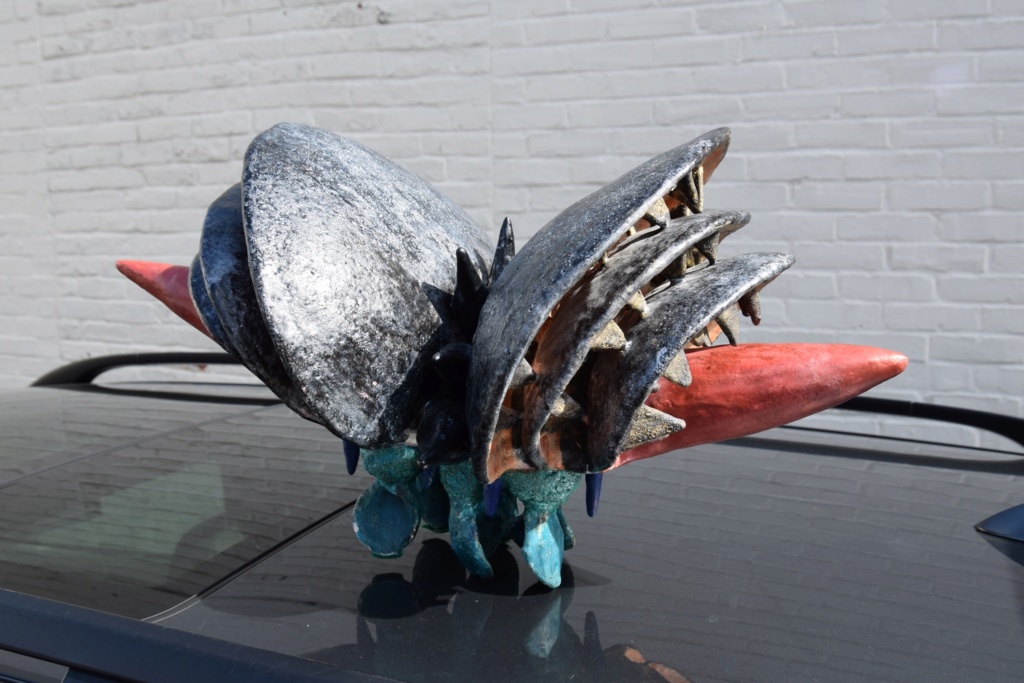 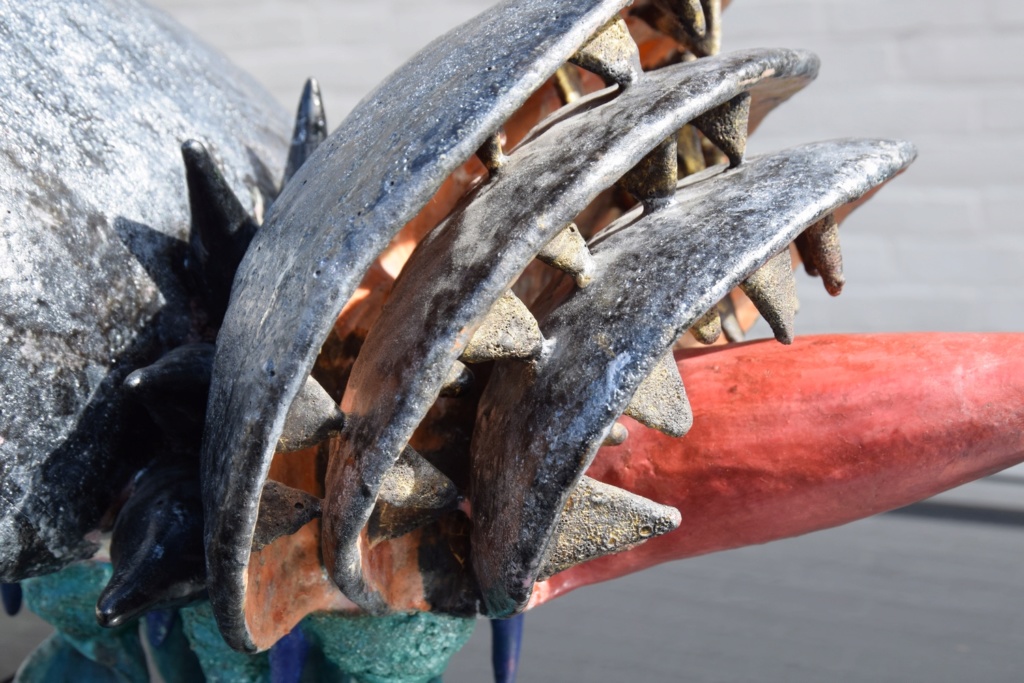 No marks at all.

I guess you could classify it as "funk". The woman I bought it from inherited it from her mother, who supposedly purchased it at a gallery at some point in the late 1970s or early 1980s.

I think I'd classify as 'disturbing'.

I can't decide what it is, an abstract dinosaur-type creature or a plant straight out of one of Hieronymus Bosch's nightmares.

I've got an idea about this... forgive my speculation, but I'm intrigued by this piece. It is very confident, technically accomplished, somewhat organic without being a representation, it has overtones of deconstruction of a plant or animal form, and yes, it is unsettling. It is not "like" anything except itself, and it is superbly balanced, visually.

The name of the artist is Nikki de Saint Phalle. De Saint Phalle was an avant garde sculptor and mixed media artist, I looked on line for evidence that she worked in clay at all and she did - well she worked in all media really. On-line the images shown with her name generally focus on forms that resemble the human body, particularly the female body, because they have impact for a wide range of viewers, but that was not all of it.

Wikipedia says: " By 1963, she had taken the series to galleries in New York City and Los Angeles, inviting the public to participate in the shootings. In Los Angeles, she shot a large-scale King Kong assemblage she had constructed, paint-splattering the embedded sculpted faces of politicians such as John F Kennedy, Fidel Castro, and Charles De Gaulle, with Santa Claus and Donald Duck as well.[29] This work would later be acquired by the Moderna Museet in Stockholm,[21] and would mark her transition to a new series of fantastic monsters, animals, and female figures.[11][16]:47 Throughout her career, snakes, birds, and dragons would become recurring symbols in her artworks.[9]"

Monsters. Dragons. Unsettling work. Sculpted. Wide, high-flying conceptualisation. Could this be a work by de Saint Phalle, or someone who admired her work enough to produce something so assured? I don't know. The only way to find out would be to take it to an auctioneer specialising in mid twentieth-century art, and ask.

Just my two-cents worth - my first creative training was in sculpture, Southampton Art College, 1966-69! We were aware of de Saint Phalle's work then. 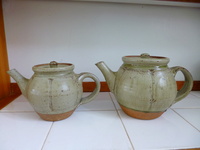 Personally, I think you assessment of the piece is spot on. In fact, it perfectly describes the piece.

I also think you might be right about it being by Nikki de Saint Phalle. The piece pictured in that link is a different thing entirely, but feel it has very much the same sensibility as the piece I have. Although, I feel that that piece is much earlier.

Thank you for your input. It's greatly appreciated.

Thank you _quatervois_ here's hoping! Looking yet again - and the piece does repay a lot of looking - the modelling of the red parts of the piece looks similar to de Saint Phalle's modelling on other items, that smooth-curve-but-a-bit-lumpy, hand-modelled look to the surface was a characteristic of much of her work. Well. I have many ideas in life and some of them are good and some of them are rubbish. If this turns out to be one of the rubbish ones, I would be embarrassed, but it is still a very striking, amazingly confident piece. How strong a sense of assurance would a person have to have to make something like that? Very strong I think. Please do let us know if you find out anything further. Best wishes!

P.S. It could even be a maquette for a much larger piece, if it was by that artist, she did make maquettes.

never seen any ceramics by Nikki dest phalle only fiberglass

Wikipedia says she worked in porcelain among other media - this is not porcelain, I realise, but it indicates that she did use clay, if the Wikipedia entry can be believed. The French website about her mentions a maquette so she made maquettes sometimes. Who knows what she used before she got to the fibreglass construction stage? My speculation has to end here. Someone in the world will be able to tell whether or not it is her work.

just said I4dnever seen one seen lots of fiberglass but nothing remotely like this but who knows ?