MORE INDISTINCT MAKERS MARKS! A STUDIO YUNOMI BY THE LOOKS OF IT... H: 80mm DIA: 80 mm.
GLOSS TENMOKU GLAZE STONEWARE WITH IMPRESSED CIRCLE OF DOTS DECORATION. THERE ARE A COUPLE OF MARKS ON THE RIM. ONE LOOKS LIKE A STYLISED CHRISTMAS TREE??
ANY IDEA WHO'S RESPONSIBLE FOR THIS FELLA? NICELY CLEANED FOOT RIM. THANKS AGAIN. 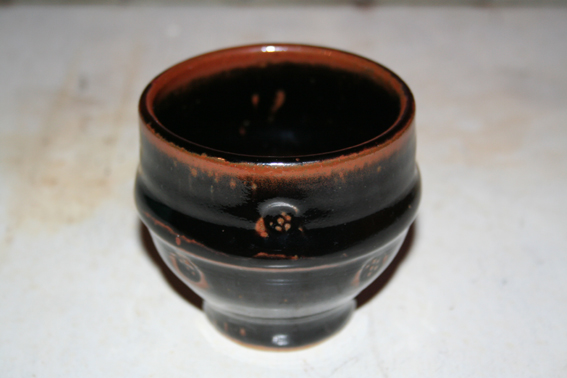 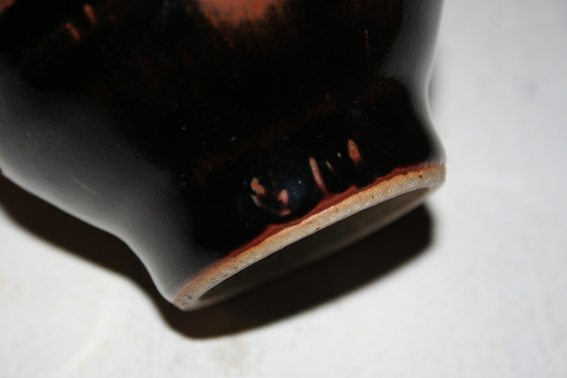 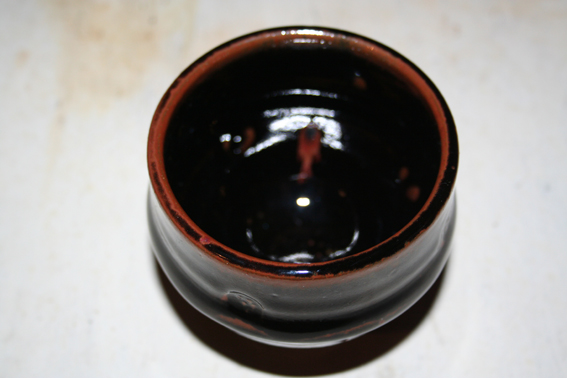 Thanks for that... I'll get in touch with The Leach Pottery and see what they recon.

After much forensic investigation and pure determination... I think that I may have found the maker of this teacup.
David Winkley at the Vellow Pottery, Somerset. He took over the Vellow Pottery in 1966 and is still working, in his 80s I believe.

The marks are extremely vague (filled in) and are difficult to photograph... However, they do appear to be the circular stamp for Vellow, followed by a 'W' with dots and a horizontal line for David Winkley. This extra photo is the best I can get, plus a couple of images showing individual marks. There is NO type i.e. 'Vellow Pottery'. 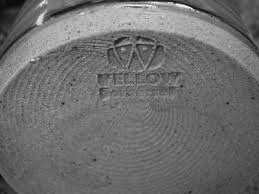 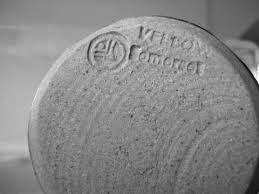 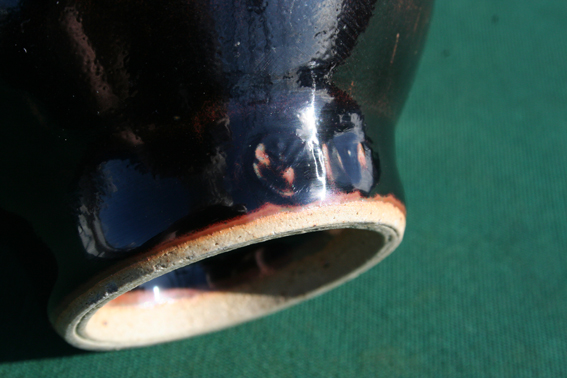 I don’t believe it’s Vellow Pottery; I’ve not come across any tea bowls by them.
The style is typical of potters who’ve trained at Leach St Ives - Jim Malone, Roelof Uys, Phil Rogers, Tim Lake, John Leach, Trevor Corser...
worth comparing it to Roelof’s mark
_________________
Just my personal opinion, take it or leave it.

I hear you and bow to your extensive knowledge in all things pottery, but, I did get in touch with Leach and someone who had worked with Trevor Corser said it wasn't a piece by him, nor by anyone she knew at the Leach Pottery. I did however, get in touch with David Winkley and he thought that it might be one of his as he had made tenmoku glazed teacups a long while ago (late 60s?) but wasn't entirely sure. He got back in touch and said that his wife thought that it was a piece by him as she had a teapot in the same glaze with the identical 'dot' impressed motif. So, who knows for sure?? Thanks

It looks like two separate marks. Probably a generic pottery one and a personal one. Which would make St Ives, and a St Ives trained/influence potter potter a likely candidate. Most of those 'Leach style potters that Naomi mentions do not use two marks. It also looks pretty new, so maybe the modern St Ives incarnation? But who from there? Also Trevor Corser - as Naomi says- would probably be a good candidate.
Definitely don't think its Vellow. That thick, tenmoku gloss glaze was never their style.

It's definitely not by Corser, nor a St Ives mark. Thanks for your message.

If you have been able to eliminate St Ives, have you a clearer idea of what the marks read?

Yes, think so. If you read previous posts above. Cheers!

Sorry I missed your Vellow post Glad you got an answer.