Here's one for you pot detectives

I've had this mysterious pot for ever. I think it's wood-fired stoneware and possibly has a monogram on a tiny blob of clay on the base, although this may be my eyes playing tricks.
The real mystery is the lid! What on earth would be the point of it? The sides of the lid extend to the bottom of the pot, and has two holes on opposite sides. I initially thought that they were for a rod to push through to suspend the lid at different heights, but that just makes the thing unstable (the lid leans off to the side) and seems a pointless exercise anyway.
So, my questions are:
1) is it a monogram and if so, whose? and
2) What the bloody hell is that lid all about? 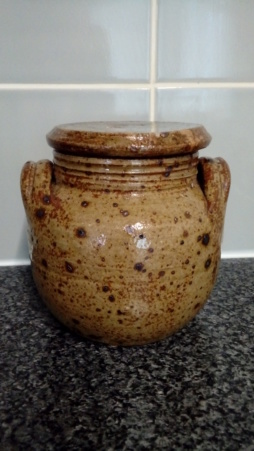 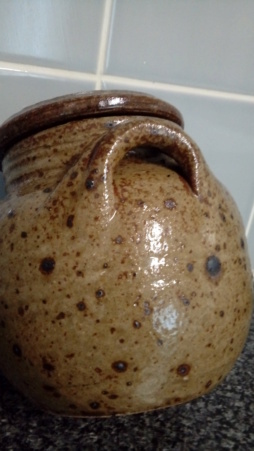 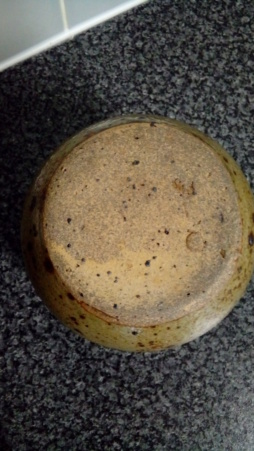 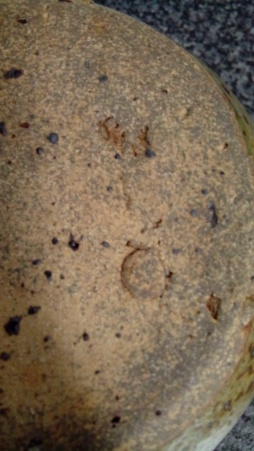 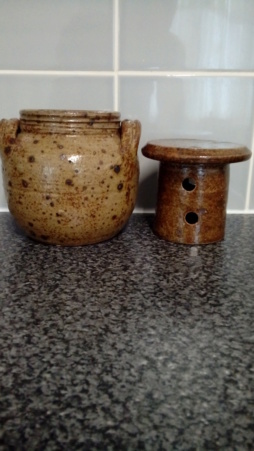 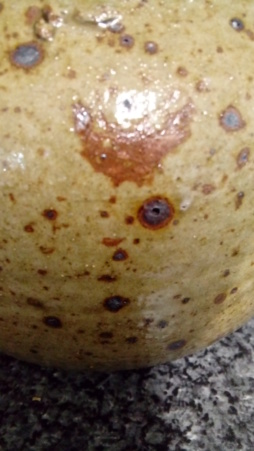 I don’t think it’s marked. The black spots on the surface points to it being French provincial pottery
_________________
Carrot cake is just fake cake

I was thinking continental, though more because of the odd design rather than the glaze. Would the black spots be ash from the kiln?
I'm pretty sure it isn't signed, but I just can't unsee what looks like 'AB' or similar in the blob of clay on the base (close-up on 4th. pic). Probably a case of pareidolia, but does anybody else see it?
It's that lid that's bugging me more than anything.

Isn't that a butter bell?
Janet

You can find some in images, but you really have to persist.
Janet

I had never heard of a butter bell before today, so thank you for the education. I've looked into them and it appears that you are likely correct, Janet, although as you pointed out, Naomi, the holes seem anomolous. As I now understand it, the idea is to pack butter into the top part of the inner sleeve - the 'bell' part - and put enough cold water into the pot to cover the bottom of the sleeve, providing an airtight seal for the butter, but this one cannot be made airtight in this way because of the holes.
That said, an image search brought up just a few other examples with holes, all described as either butter bells or butter crock bells. The first one I saw was an antique French piece, possibly late 18th-early 19thC, and the others looked modern. I'm wondering if they actually are butter bells, or are just assumed to be so because of the similarity, but if not butter bells then what else could they be? I suppose that they could be for soft French cheeses, with the water keeping the cheese cool and the holes allowing it to breath.

I finally found an explanation for the holes that seems logical. If the butter part isn't kept full, the butter loses contact with the water, so holes let the water in. The butter and water won't mix, so there's no danger of the water diluting the butter.

That makes sense. From what I've read it sounded as though the water was only supposed to cover the bottom of the inner sleeve rather than be in contact with the butter. I don't think I'll be using it as intended but I like it as a pot in its own right.
Thanks to Janet and Naomi for all your help. You've no idea how many years I've been bringing it out for guests to guess at its purpose, and nobody has come close to the right answer.