Hi there, I purchased this a number of years back at an estate sale. I haven't been able to ID the maker, I feel like it has a ceramike/British Studio Pottery feel to it although I can't find anything with quite the same multi-tiered rounded shape. It's very well crafted and features the marks at 4 anchor points where the handle attaches to the pot. In addition there is illegible writing on the bottom that I can't decipher. Any thoughts? and thank you kindly for taking a look... 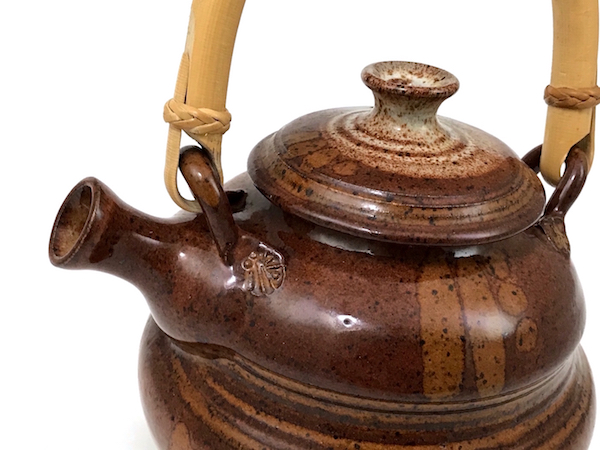 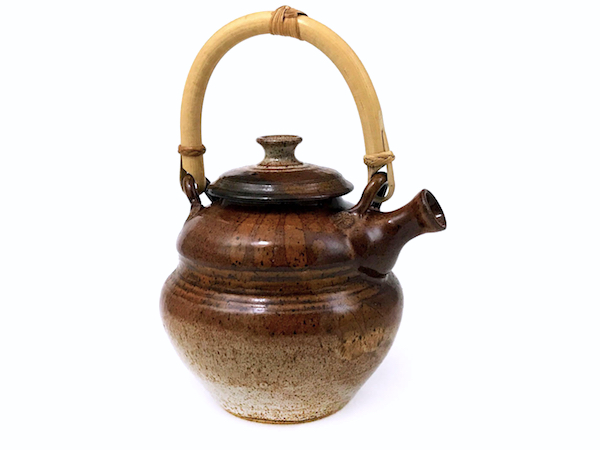 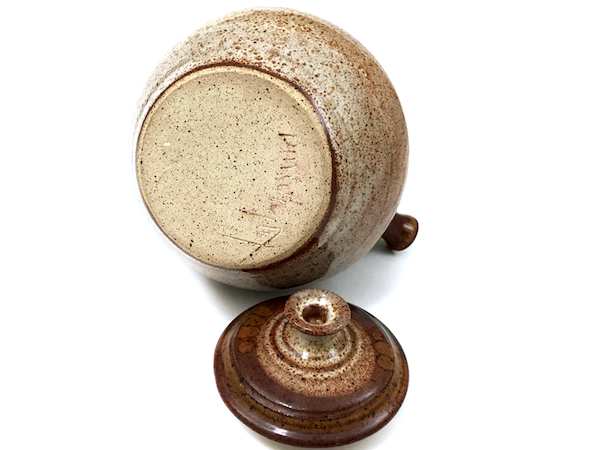 Firstly I would say that the 'mark' at the base of the spout is a decorative flourish, and not a maker's mark. Its just not a place where potters would normally put their signature, due to the nature of the making. So the identity is probably in the scrawled inscribed signature, which is difficult to read. Moreover, not too many potters would use a signature like thatin that way.
It looks like an atypical 1970's vaguely Leach Japanese style pot that would have been very popular back then. There were many people of the alternative 60's/70's life style that were drawn to potting in a big way.
A utilitarian piece, that first and foremost should function as it should. How well does it pour? That short stubby spout often makes for trouble when pouring. But it is much easier to make teapot like that! The bamboo handle is another atypical slightly arty Japanesey thing that was all the vogue in its day. Unfortunately, the bamboo handle can often make a teapot slightly more difficult to use on a routine basis. Too much give, balancing difficulties.
Actually ascribing it to anyone would be immensely difficult unless you can decipher the signature. As it is a fairly standard piece of its day. A good teapot is difficult to make by hand because of the number of differing elements, and this was often the type of thing that aspiring potters would have made to test their skills

It’s certainly US studio pottery. Maybe a close up of the signature would help to decipher it
_________________
Carrot cake is just fake cake