I have done hours of online research, sent out many e-mails, messages and have visited both Leach Pottery and John Bedding’s fantastic St Ives gallery.

This is perhaps the last throw of the dice to try to identify the Potter who decorated and/or threw this bowl.

I love it and have it on display.

Thanks for any help. 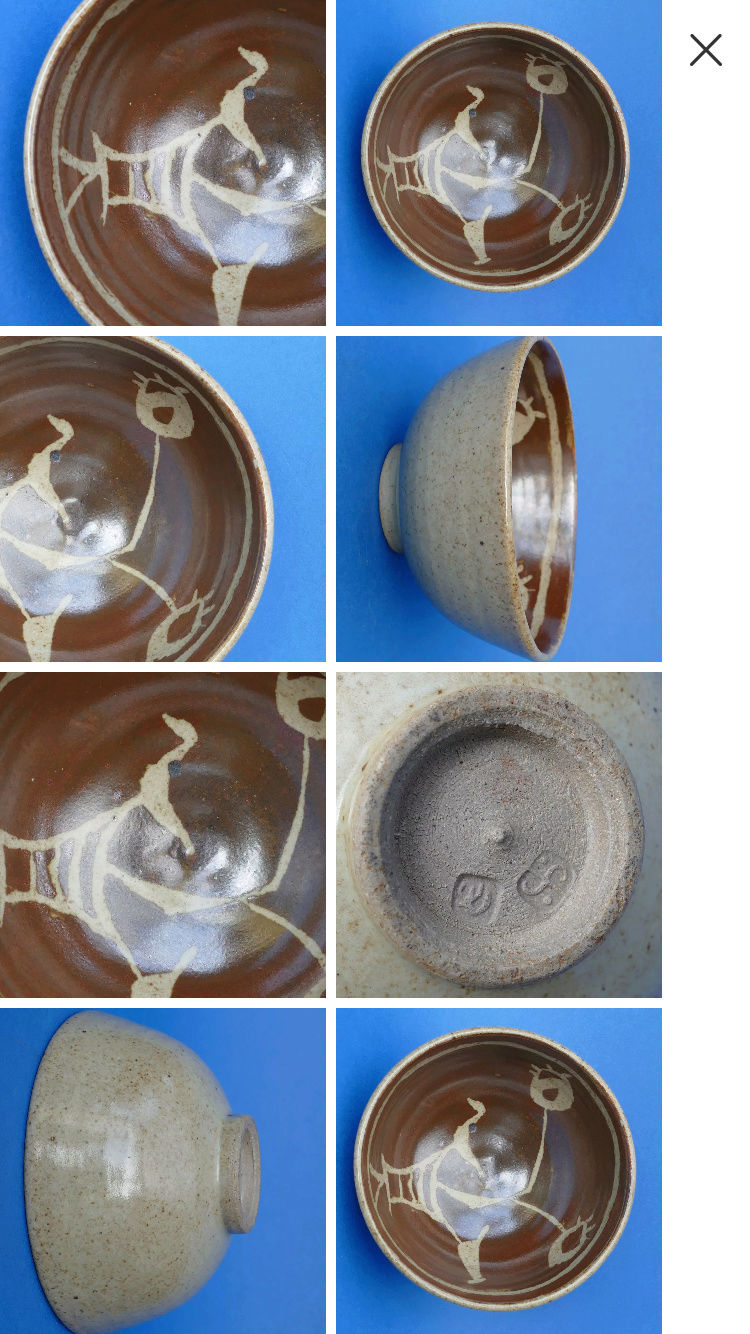 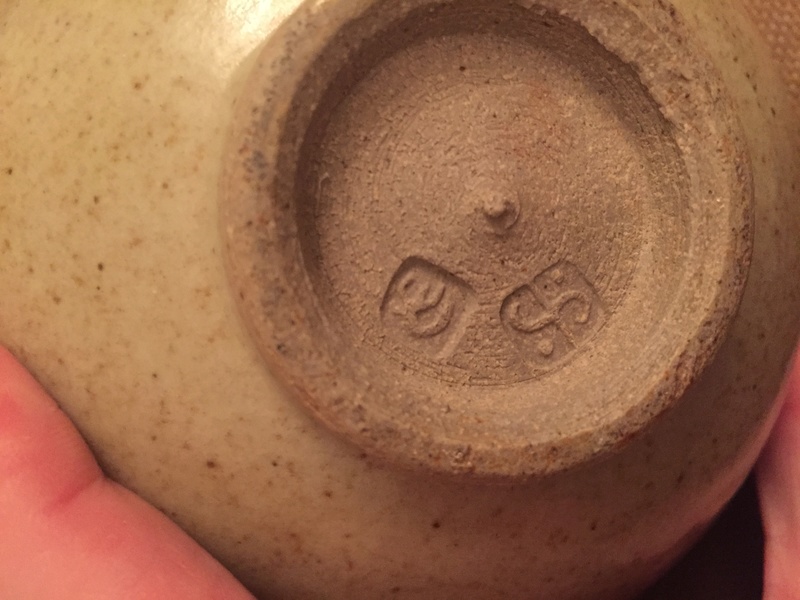 Not a mark I've come across before. The recent revival of the Leach pottery has seen a large number of students and foreign potters on sabatical making pieces there and being allowed to use their own personal stamps along with the leach mark. Unfortunately we've found that the pottery haven't kept a record of those personal marks.
_________________
Carrot cake is just fake cake

Many thanks. Is this bowl dateable by the glaze, shape or clay used?

I haven't made a list of dated Leach marks but it's on my To Do list, but the basket and flowers motif is common in traditional Oriental pottery, and that tenmoku glaze may be a Mashiko 'kaki' glaze, but that's just a guess. If it's a Japanese potter then the mark isn't typical; it looks Westernised. But worth checking if it's a Kanji mark.
_________________
Carrot cake is just fake cake

Very helpful Naomi. I sat in the library during lunch and went from front to back cover of the British Studio Pottery Marks. This information allows me to start a new line of research.

The incredibly casual way that the 'modern' St Ives pottery has let all and sundry use their own personal marks, reflects very badly on their custodianship of a cherished studio pottery institution. To the extent that the 'modern' 21st century St Ives, is viewed by a number of Leach pottery collectors as little to do with the Bernard Leach 20th century incarnation.
Must admit that this piece screams 'modern'. The glaze is very unususal for 20th century  St Ives. Indeed, I don't think I ever seen it on a 20th century Leach piece. Similarly with the decoration. Which as Naomi says looks somewhat oreintal. Now none of the sons and grandsons of Shoji Hamada - Tomoo, Shinsaku, and Atsuya - who worked at St Ives, used a personal mark while they were there. This is not Shoji Hamada's mark.
Shigeyoshi Ichino at St Ives 1969/70 produced a lot of work that did not match the traditional St Ives Canon. But that is nowhere near his mark
So yes. 21st century St Ives. Unidentifiable until the 'modern' St Ives take their historical inheritance seriously.

Leach St Ives couldn't even ID a Jeff Oestreich mark which was used in conjunction with the St Ives mark; they're hopeless.
_________________
Carrot cake is just fake cake

I contacted John Bedding and received a reply two weeks ago. He was unable to identify the Potter. Over Christmas I called into his St Ives gallery. What an impressive display from great Potters past and present. I cannot wait to return there. I would guess he’s a man who definitely knows his marks.

In my experience Collectors are far better at IDing marks than potters because we see hundreds if not thousands of them over the years, where as potters just see those of a handful of potting friends and acquaintances
_________________
Carrot cake is just fake cake

There is a suggestion on another social media platform that this could be the work and stamp of Laurence Eastwood, a Leach apprentice in 2015.

I’ve messaged him and am a awaiting his reply.

On looking at again. The glaze just does not look like any glaze that the 'old leach' ever used. The suggestion about a modern leach potter seems spot on. Unfortunately that makes it of no interest at all to collector's of traditional 'old leach'

Well we will probably have to wait a couple of generations before the current batch of Leach potters reaches ‘old Leach’ status, but that doesn’t mean there aren’t some very interesting and collectible pieces being made by them today. But if one only thinks of resale value then best not to collect anything currently being made.
_________________
Carrot cake is just fake cake

Agreed Naomi. nothing wrong with the pots coming out of the Modern Leach. But Bernard Leach and the associated Leach potters have this near legendary status in the history of 20th century British studio pottery. That gives them an aura that very few other potters or potteries have.
Buy modern Leach because it is nice stuff. But it is never ever going to have the cachet of a near legend.

NaomiM wrote:IDed as Laurence Eastwood's mark. One of the new batch of potters at St Ives

Many thanks Naomi. I’ll now pencil Laurence’s name on the base. A very happy conclusion to a three year search for the potter.