Can anyone shed some light on who this might be by.  The markings are a B and H plus an impressed Spoonbill type bird.  Many thanks 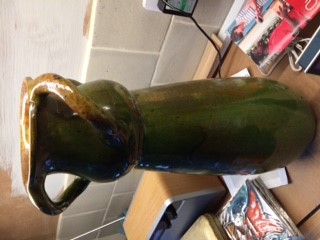 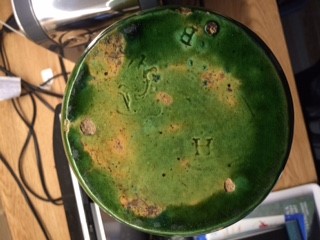 Better image below.
Its a bird but doesn't look like a chicken or cockerel. 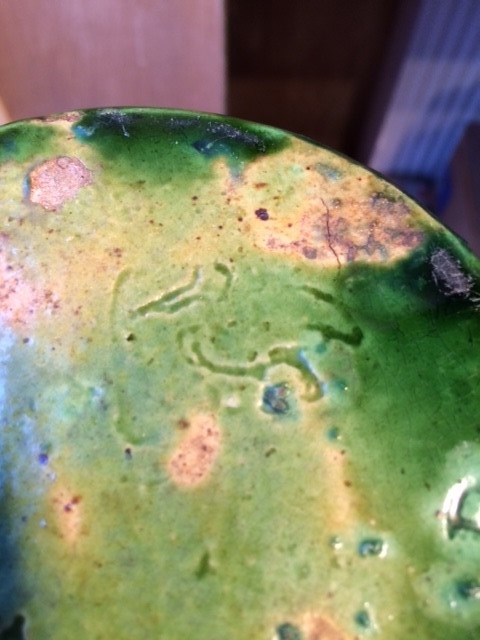 This is a Belgian vase made off the hand Charles Maes between 1900-1909.
The pieces from the studio carry a crushed pelican as a trademark.
The letters b & h are the initials of the potter baker's servants.

Charles Maes (° 1847 - † 1924) made simple utensils, such as flower pots, preserving jars and bowls, from around 1885 in his pottery workshop in Sint-Amandsberg near Ghent. From 1899, in a newly built pottery, in addition to ornamental pottery and sculptures, also tiles and fireplaces were produced. After the turn of the century he received the help of his sons Jules (° 1876 - † 1958) and Auguste (° 1871 - † 1939). On July 31, 1909, Charles Maes made an application to the Permanent Deputation to build a new pottery in Bruges. However, this new factory never came.

After his retirement in 1909, a temporary association was established by his sons for the duration of 10 years. Flowerpot production was stopped and only artistic pottery was produced. The company has won several medals and honorary diplomas at various local, national and international exhibitions. When the ten-year permit expired in 1920, the company came to an end.

Both brothers went their separate ways. Auguste started a business in Sint-Denijs-Westrem. In 1923 the pottery moved to Ghent where they produced under the name ASTORIA. In 1934 he closed the doors.

His brother Jules also continued to work as an independent potter. In 1930, together with sculptor Domien Ingels (° 1881 - † 1946), he founded the company S.A. Céramiques d'Art CERAMAES at Drongen. The canvas fell in 1933 about this company.
A sales catalog from 1905 from this East Flemish company is known.

Thanks for adding all that information

I wish more people would do that when solving their id mystery as it adds greatly to our research resource
_________________
Making new friends as an adult is hard...because I don't want them.

Thanks luc0404 for the positive ID on my vase. I've been away from the board for a few weeks otherwise I would have replied earlier. Much appreciated :-)