Hi. I just bought this 21cm tall stoneware vase as part of a mixed lot of studio pottery. The mark at the edge of the base has been mostly filled in with glaze and can't be read.  The lot also included a big charger by David Frith with his earlier dfp mark. Can anyone confirm (or otherwise) if the vase is (or isn't) by him too? If not, any other ideas please?

I've checked it against various photos of David Frith's marks and can't match the small piece of a letter with any of them, so I'd have to say it's unlikely. But hopefully others will know better.
_________________
Just my personal opinion, take it or leave it.

The style of the vase and its decoration do suggest that it might well have been David Frith. However, I agree with Naomi that the part of the impressed seal that is visible doesn't seem to match up with any of his marks.

In reality the only person who is going to be able to say one way or the other is David Frith himself.
_________________
Now you should know by now that Potty and I need to see your bottom - we're funny that way!

Thank you Naomi and S-P. I agree that what we can see of the mark doesn't look like his - unless it's just a part of the bottom wavy line of the Brookhouse Pottery seal. But the clay, the potting, the glaze and the decoration do all look and feel like work by David Frith. I'll try emailing him and if I get an answer I'll post it here.

I emailed Brookhouse Pottery and got this very prompt and helpful reply from Margaret Frith (quoted with her permission):

"This is definitely not David as we can tell by the decoration! It is probably one of our students as it is most certainly our techniques and kaki glaze.  After having done schools for 30 years or more there are quite a lot of potters using these techniques.

Cannot say unless we saw it in the flesh whether it was fired here!  Still it has a nice quality to it! If we could see the mark it might help! Keep it anyway.

So I guess this one might remain a mystery.  But I will keep it anyway.

"This is definitely not David as we can tell by the decoration!

A bit too flowery for him, presumably.

Nice to get such a prompt response.

Iain Denniss, Egremont, Cumbria. A new name to me. Not in the book. No existing thread on this forum. Very little information online. But a very competently-made and decorated 10-inch stoneware plate, with a clear ID seal.

The address label means I don't have to show him in the "ID my pottery" section.  In fact, he could say: "ID - my pottery!" 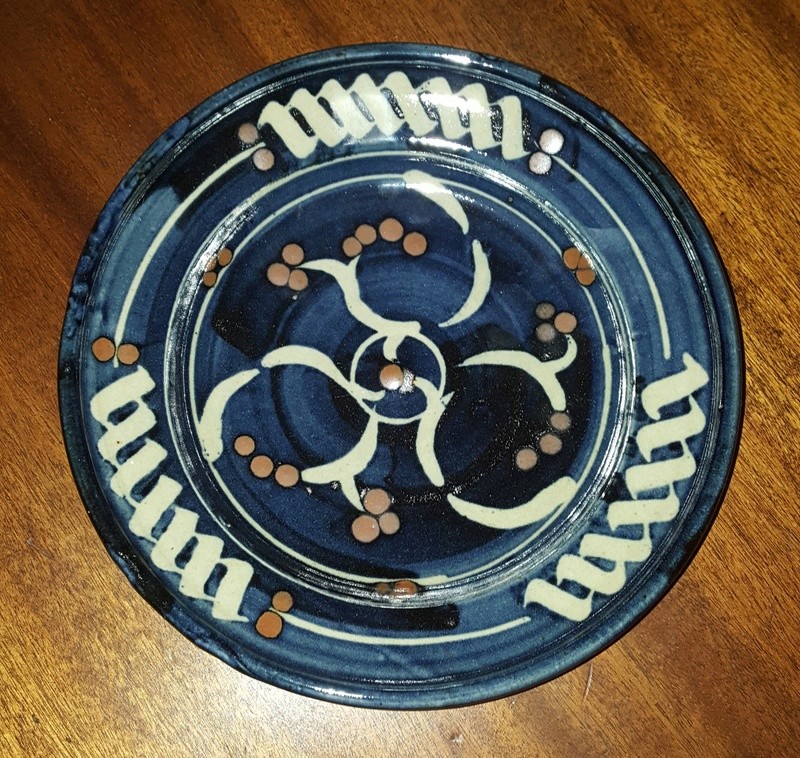 A couple more. Quite similar glazes and stoneware or porcelain clay to that used by the Friths. I wonder if he was an ex-apprentice? There was a similar fish on a cheese dome a while back. I'll see if I can find it.

I found an obituary in his old school magazine. He died in 2006 at the age of 58; his main career was as a research scientist at Sellafield, but, it says, "Iain was also very well known locally as a potter, his speciality being highly prized birth and
wedding bowls and plates."

Delighted to say that I've been contacted by Iain Denniss's widow, Caroline Fitzpatrick, and his sister, Anne Denniss, who have much more information about him and his pottery, plus a large collection of his pots, some of which I'll be seeing and photographing next week. After that I hope to post some more pictures and biography here.

In the meantime, Caroline has discovered that the plate shown at the top of this thread (which I found in an Edinburgh charity shop) was sold in an exhibition of Iain's work held at the Broughton House Gallery, near Biggar, in 1994. Here's an excerpt from the exhibition catalogue:

"Iain Denniss started making pots when he moved to Cumbria in 1977.  He is largely self-taught but has gained much help and inspiration from summer schools in Wales with David Frith and in Brittany, with Richard Dewar.  He makes functional stone ware, most of his work being generally connected with food and eating.

The pots are fired in a reducing atmosphere in a gas kiln at about 1290 C and are mostly decorated with iron bearing glazes.  Some are decorated using wax resist technique with celadon (green) base glazes and either kaki (brown) overglaze or a blue cobalt based pigment, applied over the wax decoration.  Others are decorated with the blue pigment, generally using more or less realistic animal motifs."

Below is a photo of Iain Denniss at the 1994 exhibition. 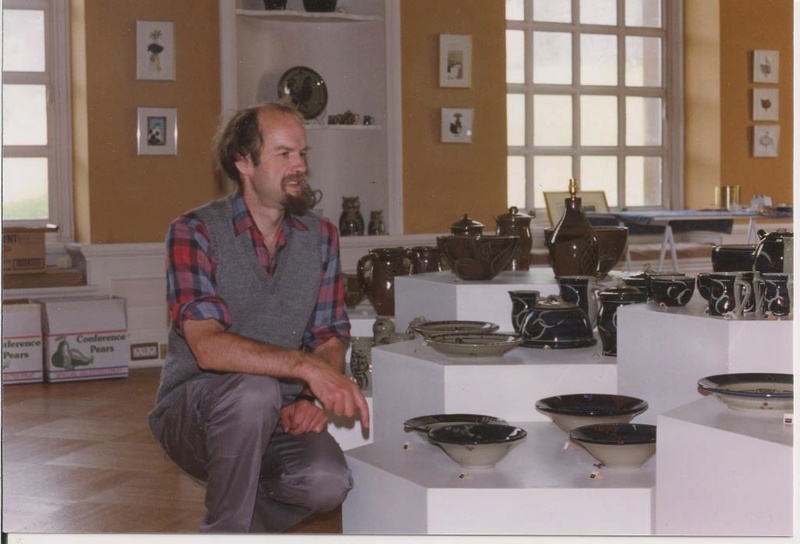 This vase has now been positively identified as being by the late Iain Denniss, who (as we thought) was indeed a student of the Friths at Brookhouse Pottery.

Thanks to Caroline Fitzpatrick, the potter's widow, who has much more information which I'll be posting on the Iain Denniss thread.

Now that is interesting.
Job well done!
Indeed, the glaze looks like one from Brookhouse pottery.

There's someone with an unidentified cheese dome, that's been on eBay for more than a year, with Iain Dennis's fish decoration
_________________
Just my personal opinion, take it or leave it.

As trailed above, I met Iain Denniss's sister Anne a couple of days ago and was allowed to photograph some of her large collection of her late brother's pieces. It turns out that he was a very accomplished and versatile potter who produced a much wider range of pottery than you might think from the very limited number of images available online.

I'm hoping at some point in the future to get more pictures from Iain's widow Caroline plus some biographical information with a view to writing an article or chapter about him.

Photos below are from Anne Denniss's collection. 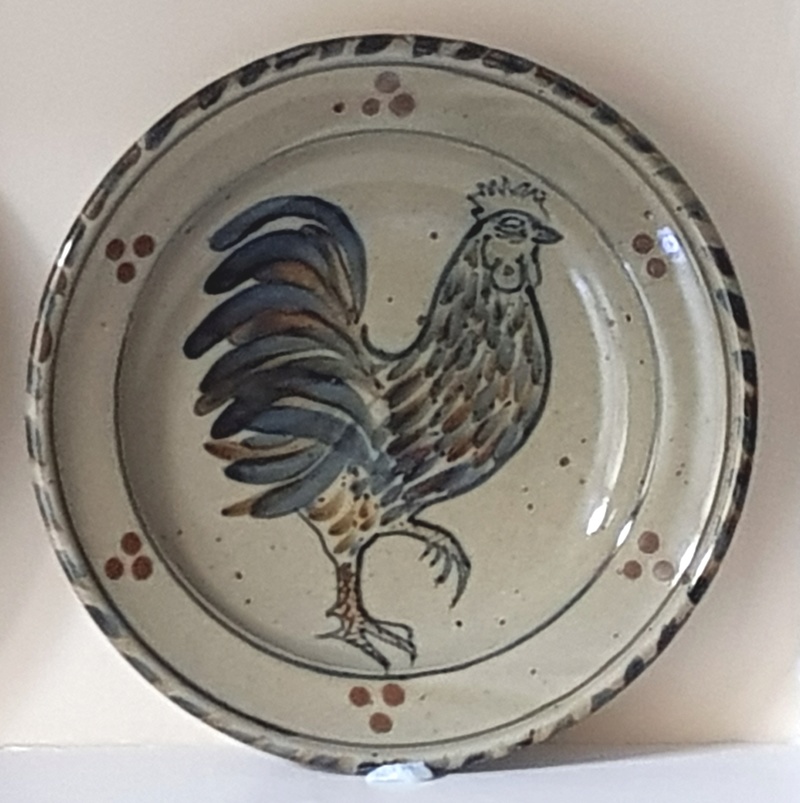 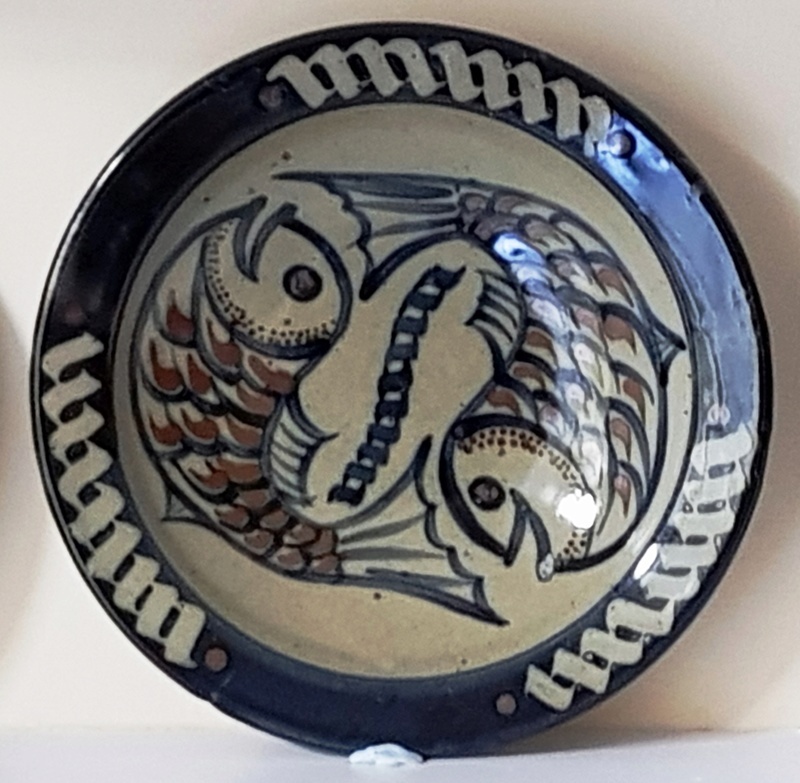 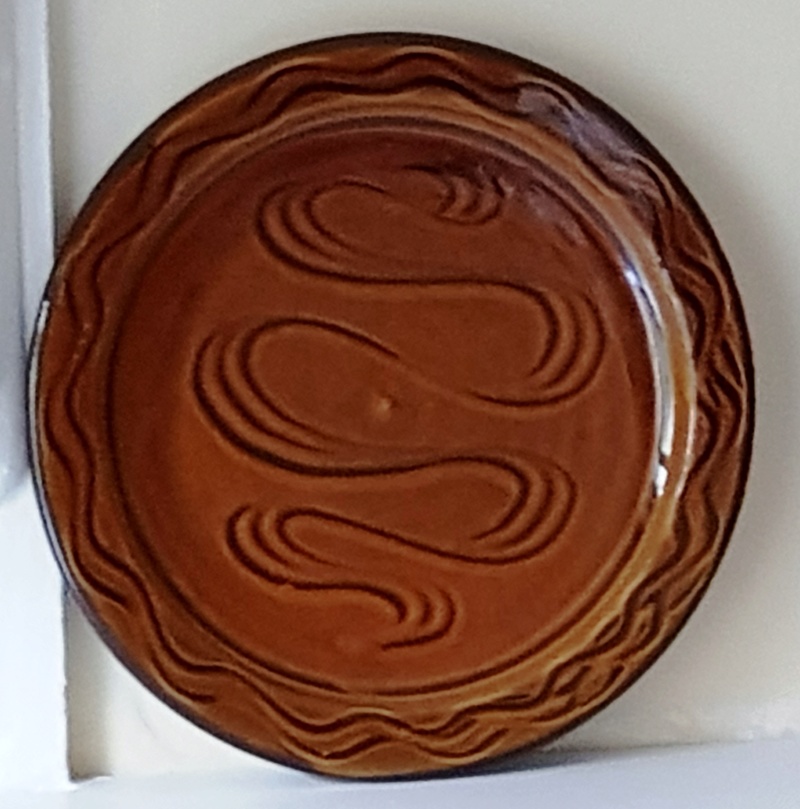 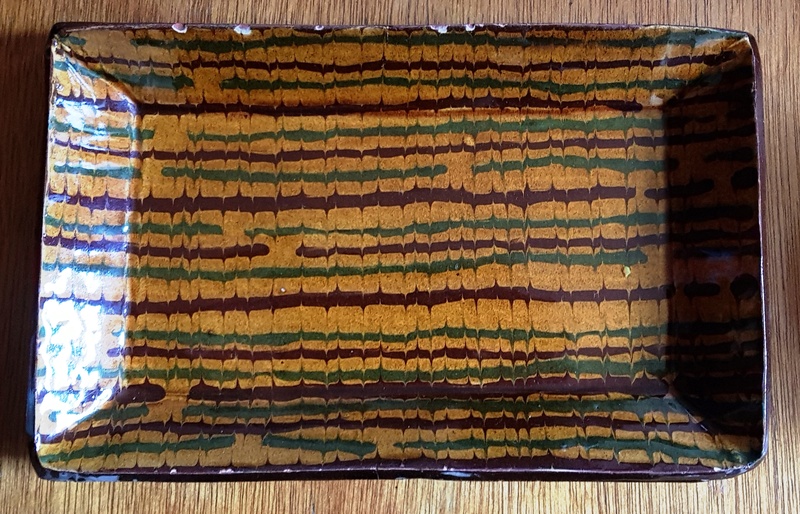 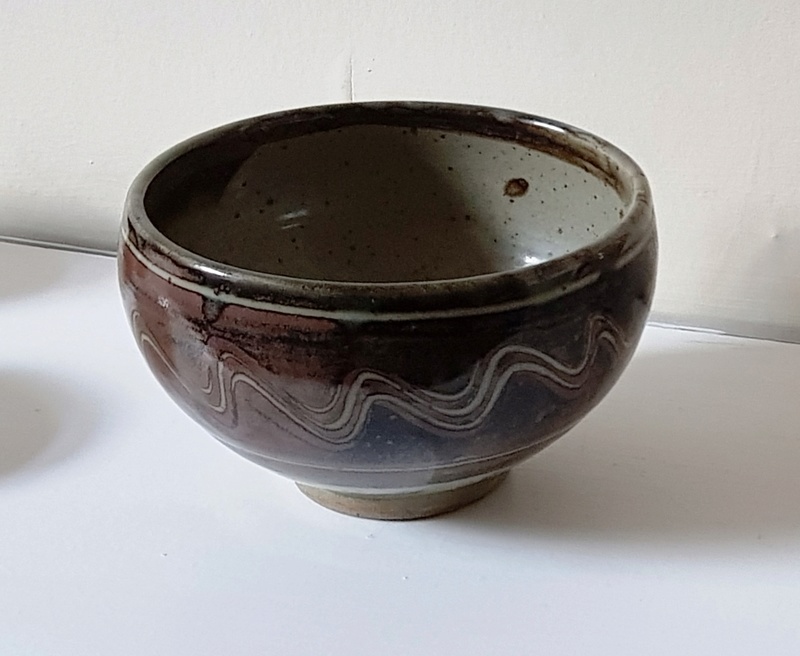 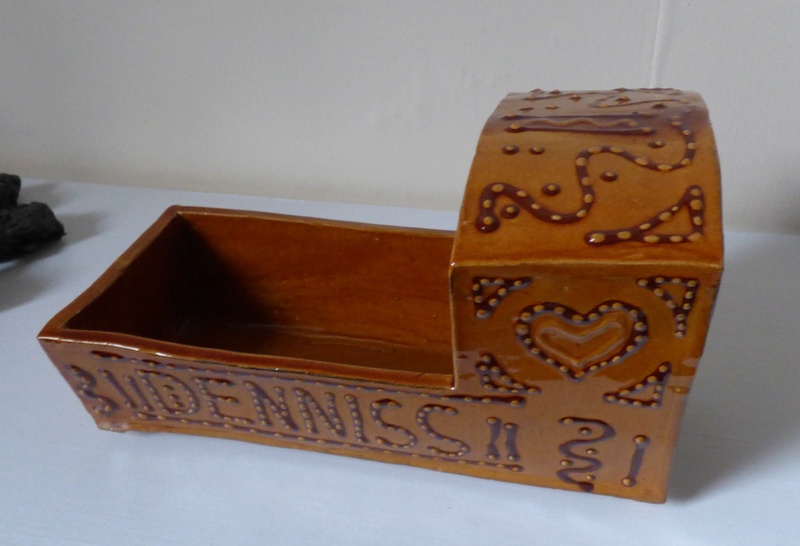 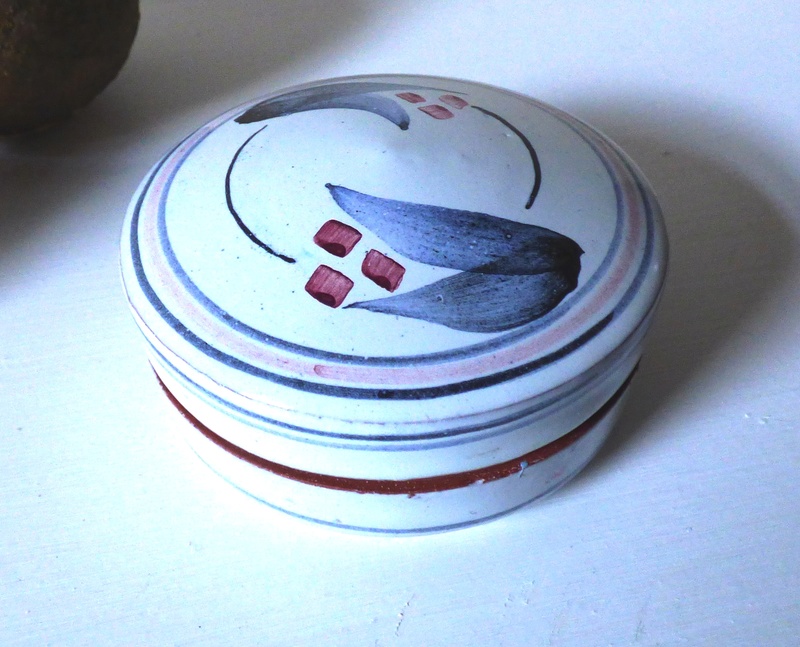 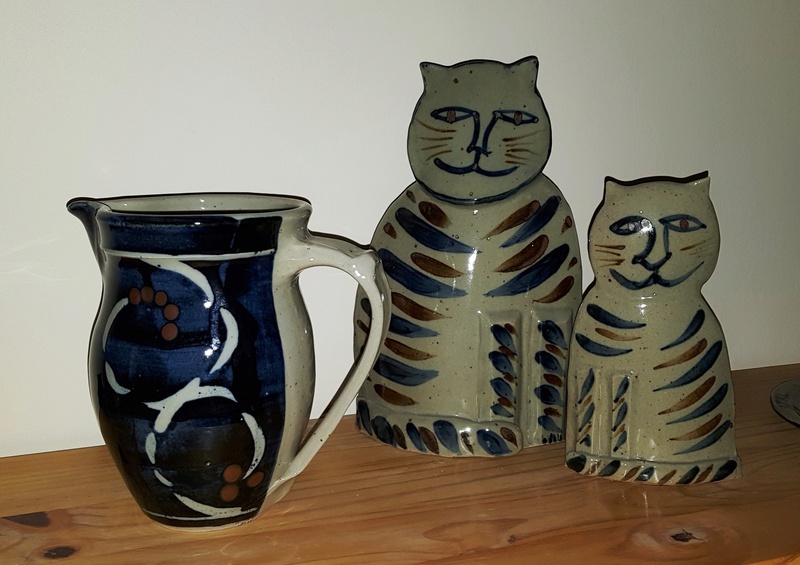 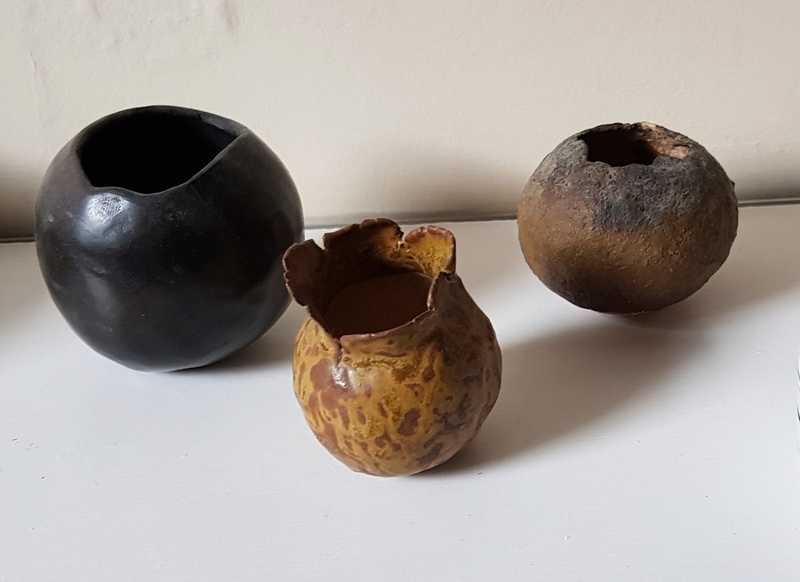 Had a lovely message from his wife, Caroline Fitzpatrick....

...After doing some searches for Iain Denniss I came across your site and forum and saw the lovely blue plate and fish bowls made by Iain, my late husband.

I also saw the jug, which you think may have been made by him and, although it has some similarities I suspect he did not make it.  Iain used to attend summer schools at the Friths and the jug may have been made by someone else there.  Somehow the style isn't quite right.  Although it is entirely possible that it was something he tried and was unhappy with so got rid of it and never used that design again!  He took many photos of his work, which I still have.

The blue plate on the forum was part of an exhibition at Broughton Gallery, near Biggar in Scotland in 1994 and was sold for £20.

I am happy to help if you need any further information....