Hi, I'm trying to identify the maker of this piece of pottery which I recently purchased. I've searched and searched online and don't seem to be able to find it, which makes me think it's rare and possibly a little known maker. Hopefully someone will recognise it and be able to identify it. Thanks in advance.

Welcome to the Forum.

Firstly, you are correct in saying that it is stoneware but it isn't salt-glazed.

Ahh it isn't salt glazed, thanks for putting me right there. At first I didn't notice them, but it does appear to have a faint dot either side of the S, and yes it is heavy. 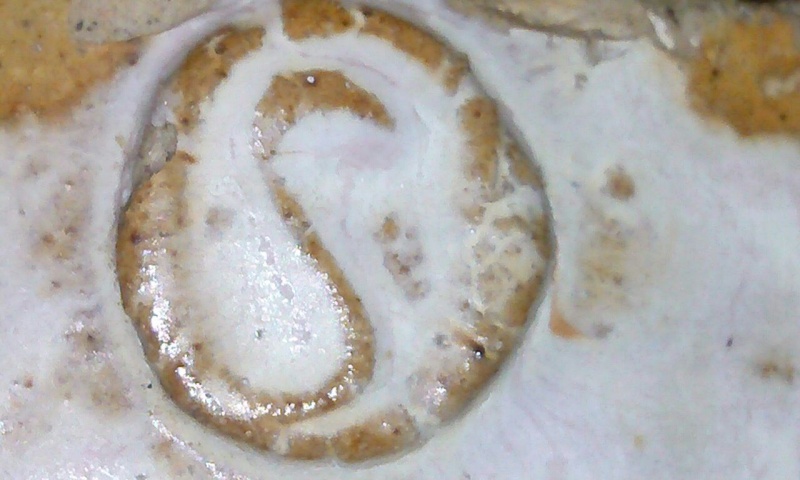 And thank you for the welcome. It's good to have a place where there are people with a much greater level of expertise than me from whom I can learn, and who are willing to share there knowledge. Thanks.

Jack Kenny uses a mark that is a S with dots either side, which stands for Seasalter where his pottery is situation. However, I'm sure that it isn't his work, as it looks like nothing that I've seen by him. It also looks to have some age and, as you confirmed that it is heavy, I wonder if it is coiled or moulded rather than thrown. The flat base suggested that possibility to me.

However, having checked various possibilities, I'm nowhere nearer coming to an identification, I'm afraid.
_________________
Now you should know by now that Potty and I need to see your bottom - we're funny that way!

It's very uneven and there's faint horizontal lines about 1.5 inches apart in a couple of places on the body, so I would guess it is coiled. I will check out Jack Kennys work, thanks for the info. It is a difficult one to identify because it's tricky to even determine the age without knowing the makers mark. Hopefully someone else may recognise it. Thank you for your help it's much appreciated.