I think there was one a while back that was unsold (high reserve).
This last meeting's one was damaged around the lampholder area,
Over-tightened probably, and had been badly repaired with brown glue.
The member who won it said he knew a good restorer, and it would be a
fairly easy job, as there was nothing missing.
He still paid a fair bit for it as I remember.
An impressive item, but strangely did nothing for me.

I have wanted one for many years but not the lamp version
_________________
"Changing your mind when you know what’s happening and you don’t like it. That’s what democracy is all about"

Maybe only a dozen or so were ever made.

Y-shaped flower holders 301 & 302.
The book attributes these to Marion Campbell (1957). but were actually designed
by John Clappison.
He was rather embarassed, even ashamed, to have been required to plagiarise an
iconic Stig Lindberg design.
There is also a pale blue version. 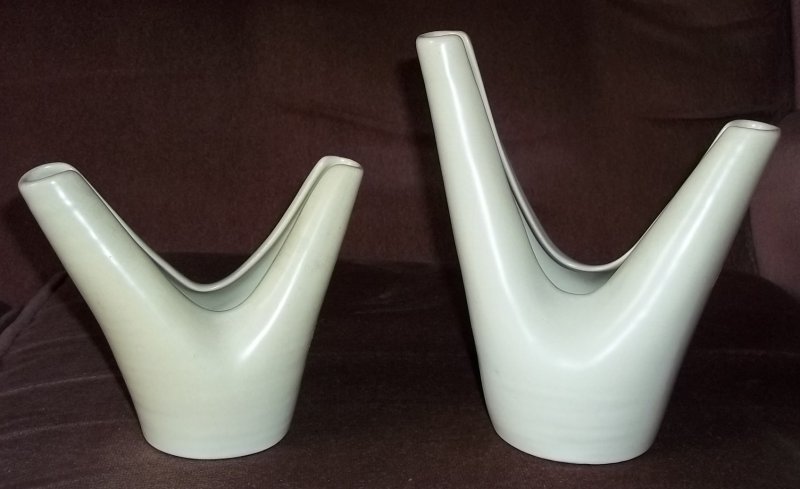 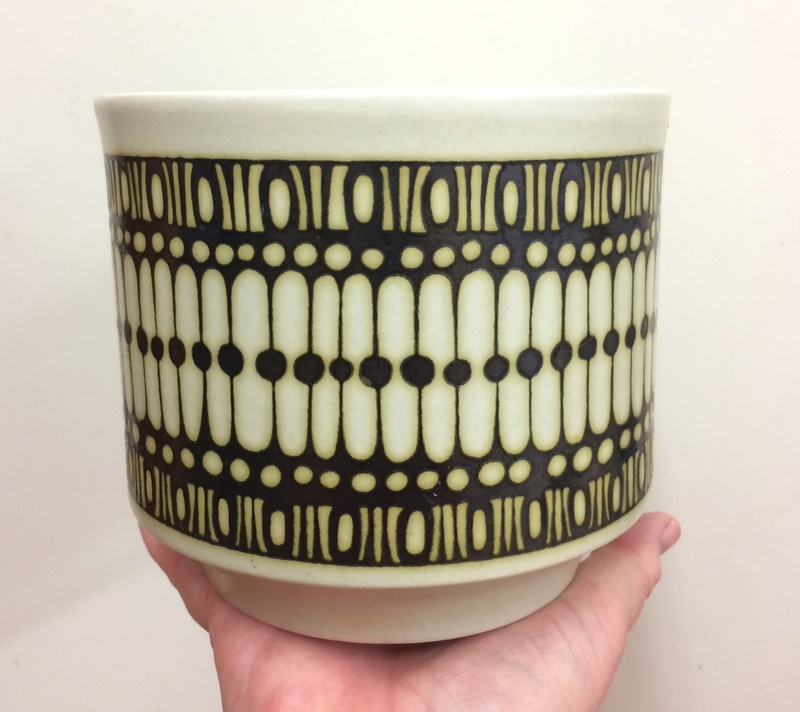 An unusual double fish Muramic at today's Hornsea meeting. They were sold in kit-form
to assemble yourself, but with the rear paper label, this may have been a shop display
or factory sample. 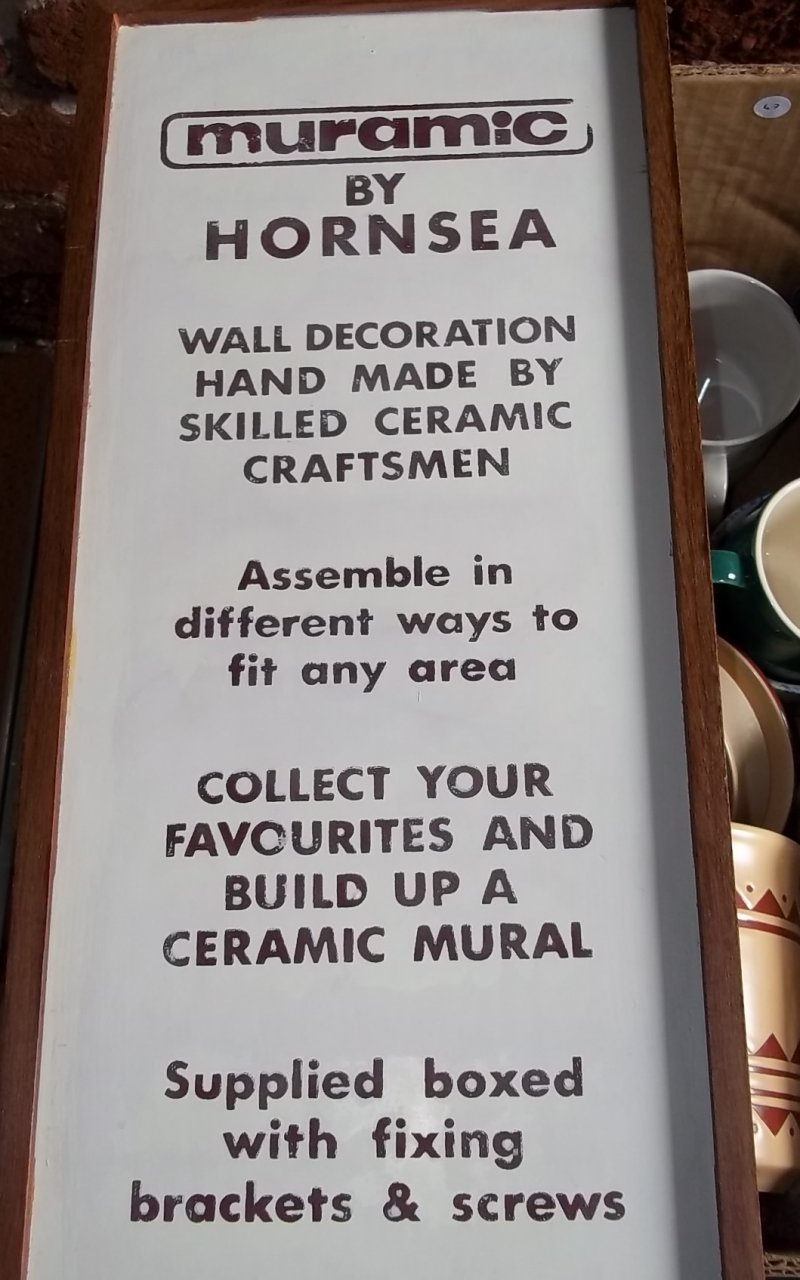 Seven Dwarfs mug, dated 1972 on the base. No credit to Disney, though clearly inspired by their versions of the characters. 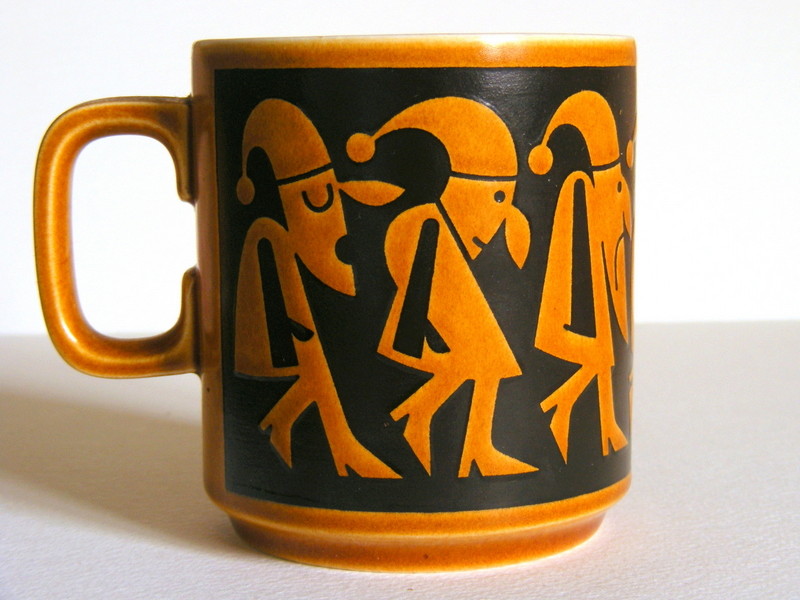 No, pure Clappison, and quite a rarity!

I thought I had seen all the Clappison mug designs but that's a first for me
h is for home just sold one on ebay,I'm surprised they didn't post pics of it here themselves
_________________
"Changing your mind when you know what’s happening and you don’t like it. That’s what democracy is all about" 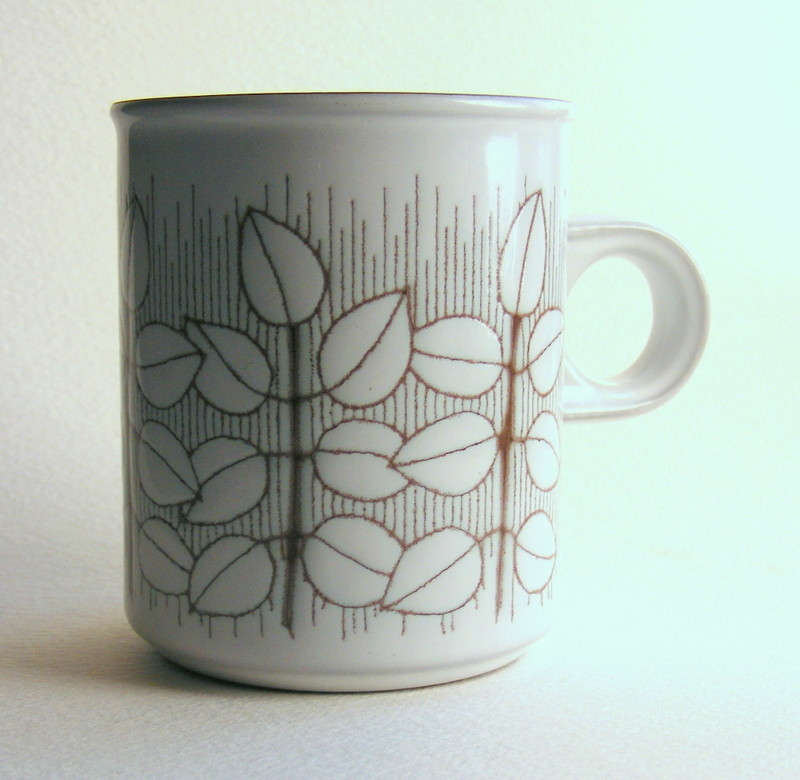 I think you mean the "Contrast" range HB.

Sorry. I do indeed. Applying the transfer to the "Concept" shapes would have been a little difficult. 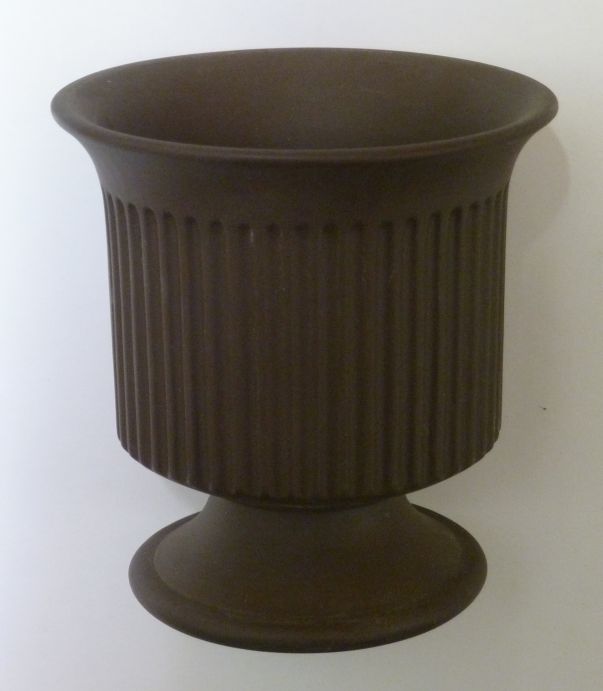 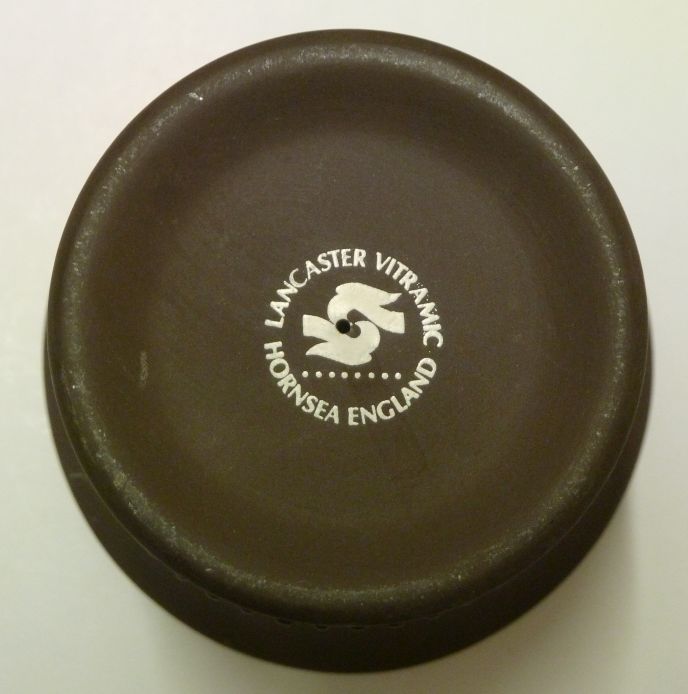 Hi,
Hoping one of the Hornsea experts here might be able to throw some light on a recent find which I'm having trouble identifying! (see photos):

- it appears to be some sort of small urn or planter with a dark brown matt finish (unglazed?) similar in texture/appearance to Wedgwood's Jasperware - and similar in colour to the undecorated parts of Hornsea's "Contrast" and "Palatine" ranges of dinnerware)

The backstamp (in white) shows two doves and an unbroken single-line date-code of 8 dots all encircled by "LANCASTER VITRAMIC HORNSEA ENGLAND"
(as per pattern H21 shown here :http://eastgatenhornsea.com/backstamp.php - indicating a manufacture date between 1978-1980)

I've seen near-identical items on eBay described as Grecian Urns - exactly the same size and shape but in white and brown glazes, marked with the twin doves trademark logo, "Hornsea England" and date code (2 lines of dots) (as per pattern H23 (1980-87) - see link).

Other urns/vases with a very similar style and finish appear to be very rare/uncommon - I could find no others currently online except :
https://pin.it/F9eUvVj
https://pin.it/MxeCM-v

Any other info. (pattern range, designer, exact date of manufacture etc.) - would be greatly appreciated.

At the centre of the backstamp there is a small pin-hole going into the base (hollow?) -  presumably an air/steam-release vent to prevent explosion during firing? ... or is there some other reason?

[EDIT: just found several examples of similarly patterned white urns/amphora under the Hornsea "White Wedding"/"Classic" ("Doric"?) range  - some with charcoal inlay, -  and one in brown from the 1980's (with design(er) details etc.) - see: https://www.instagram.com/p/BWm78ZqBeOM/

- but would still welcome any further info about the "Grecian urn" (is it part of the same set as white wedding?) - and how to decipher the Hornsea dot-dating code! ]

Many Hornsea items were reproduced at their Lancaster factory, using the chocolate
and the white high-fired clays, as used for the "contrast" and other tableware ranges.

Thanks everyone for showing your hornsea 😁

Anyone know whether this would have been a preserve pot or a standalone storage pot? 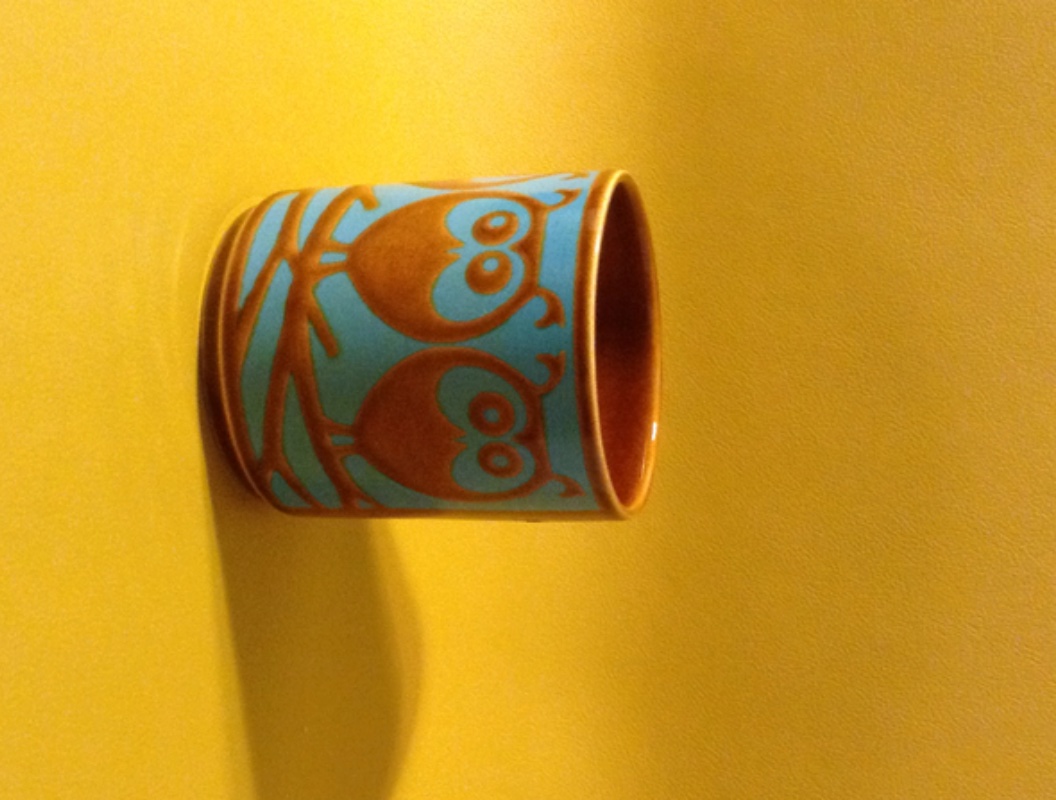 preserve I think, how tall is it?

preserve pot then, I found one on pinterest and added it to my last post
_________________
"Changing your mind when you know what’s happening and you don’t like it. That’s what democracy is all about"

Effectively a Clappison mug without the handle.

They were also made upside-down, a hole put in the "base" to make
a mini lamp base.

After decades of searching, finally got the "Adam & Eve" muramic at today's
hornsea auction. 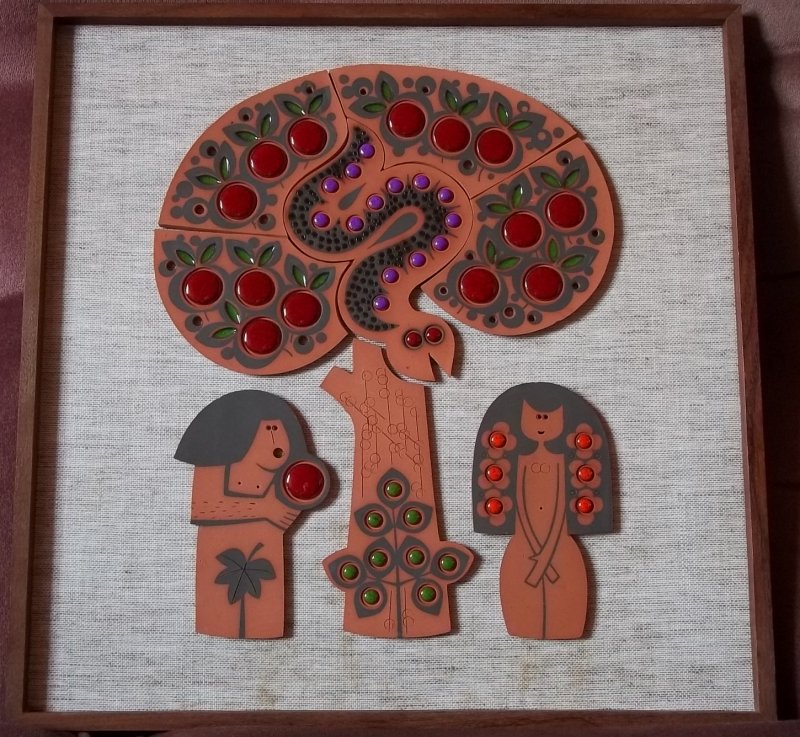 In May I stayed in a B&B on Victoria Street in Hornsea, just a couple of doors down from No 4 where the pottery company first started in 1949. The house - the one highlighted below - was up for sale. 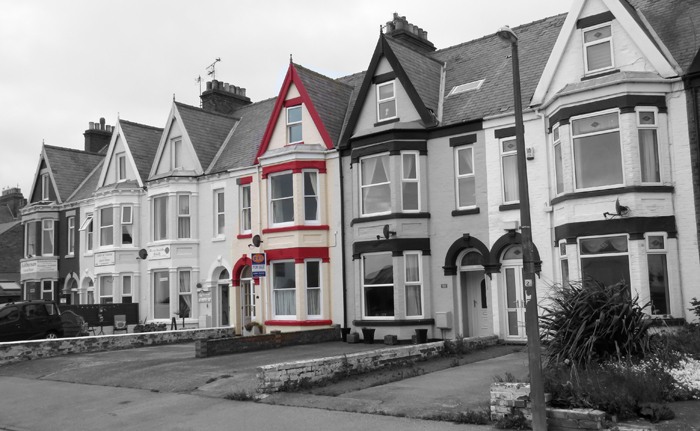 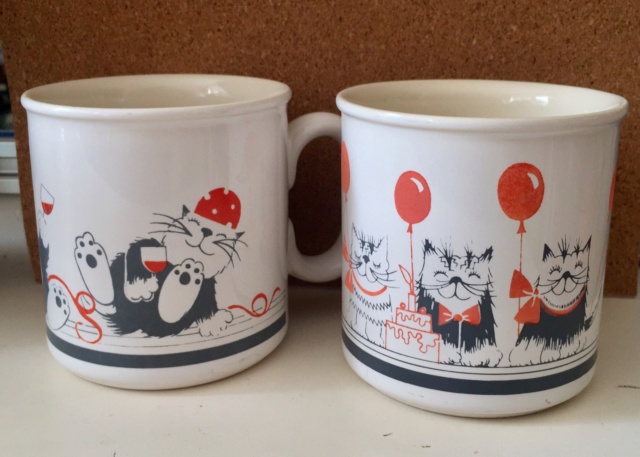 Via the Antiques Roadshow: John Clappison designed lamp base for Hornsea Pottery, limited edition of 6 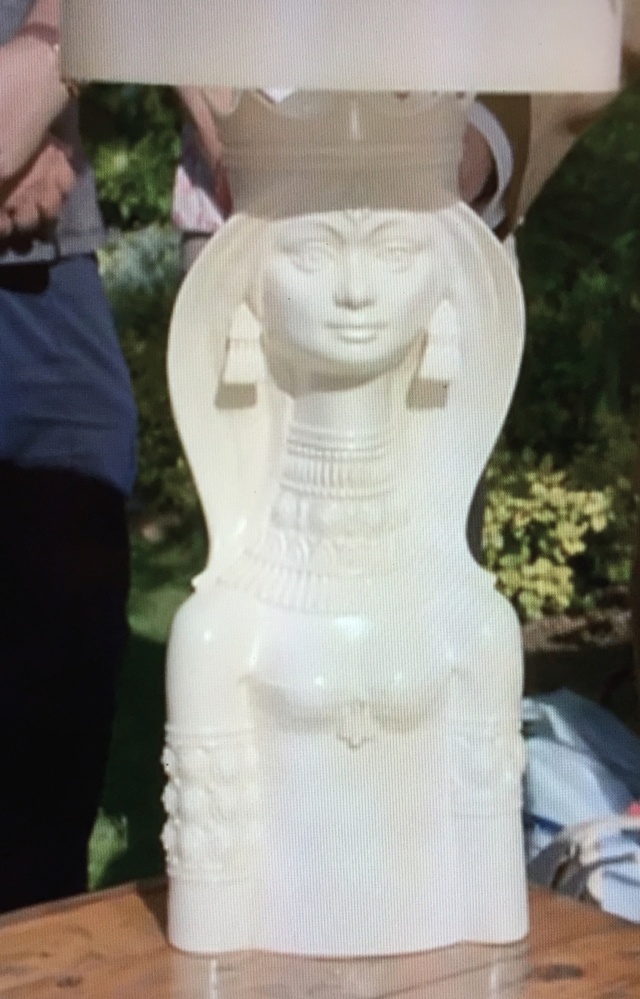