Any thoughts please on this 8 inch tall green vase. Decorated with dragon head handles. I am sure this has some age as it was given to me by an elderly friend (94 years old) who assured me she had had it for many years.
All suggestions much appreciated 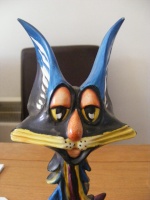 Very reminiscent of Linthorpe/Ault/Bretby in the Dresser style. The base pic is
fuzzy, but I take it there are no marks?
But could just as easily be continental art-pottery.

Not great pictures Vanmann difficult to make a firm attribute without a few shots of the base. But as you are asking and have not mentioned it then I assume the bottom has no markings. That rules out Linthorpe as they always put numbers and signatures even if they are hard to read they would be there. When they closed in 1889 Ault did buy molds and continue to make versions of Linthorpe designs most of these have Ault stamped in the bottom. Bretby also got hold of some molds and they also produced versions that in some cases had no marks. But saying all that I don't think its any of those things.

The reason it looks a little like a Dresser design is that he copied Chinese and south American originals for the European  market, sometimes he blended those designs to make strange versions of both designs. But this is not one of those.

Its a double gourd vase with lion handles. The entire things is typically Chinese. If it had a number it would be a European copy, if the base is very rough and the quality low then it could be a copy from another Asian country. But it looks Chinese from what I can see and the odds are heavily stacked it is what it appears to be an original Chinese double gourd vase. You just need an expert now to give you an idea when it was made.

Interesting similarity in the handles on the tankard I posted an ID request for some time ago !! ( and colour)

Here is a link to a Japanese bronze vase with the same handles. https://uk.pinterest.com/pin/514536326148411177/ They are Karashishi Chinese lions but it does open up the idea your vase is Japanese.

Also here is a link to a Christopher Dresser attributed Watcombe vase with similar handles. I assume this is what's triggered the connection to this vase here. Dresser is simply knicking the design though, he did not make it himself as you can see by the huge amount of Oriental versions going back centuries available on Google images. http://www.torquaypottery.com/artisansofpotteries.htm

Some new photos of base hopefully a bit clearer

Ault certainly had exactly that chamfered turned profile on the base,
and is often unmarked.