In 1906, a League of Goss Collectors was founded, becoming the International League in 1918

The business was taken over by Cauldon Potteries in 1929, the name Goss still being used. Finally it became a subsidiary of the Royal Doulton group.[2] By 1940, the Goss factory had ceased production.

In the late 1960s, Gossware became very collectable and in 1970 a modern Goss Collectors club was founded. Nearly all pieces of Gosware can be identified by a goshawk crest on the base with W. H. Goss printed underneath. Pieces made after 1931 also have the word England below the mark.

Goss, Crested China / Gossware was hugely popular into the early part of the 20th century. It fell out of favor after it's closure / sale and amalgamation.

"The Goss firm was sold out to Cauldon Potteries in 1929, but the name of Goss continued to be used. Eventually, by liquidation and amalgamation, it became part of the Royal Doulton empire"

Reading the book. We have all seen this and would only use it as hamster cage filler, but at one time it was so popular that 90% ofthe country had 'Gossware' on their mantle piece. 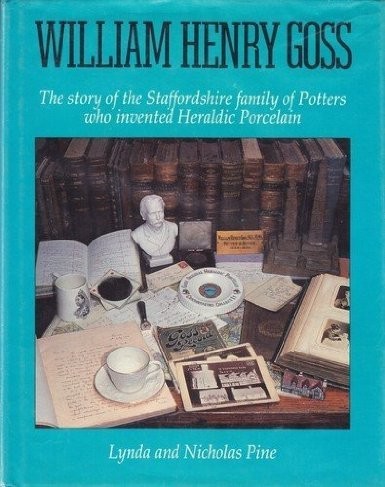 I have a few pieces of Arcadian Crestedware but not much Goss. But I did visit the museum in Waterlooville, near Portsmouth about 15yrs ago. It was in an ordinary house on a housing estate. Interesting.
_________________
Just my personal opinion, take it or leave it.

I thought it worth starting a thread as it as probably the most popular potter or 'collectible' at about the turn of the century, that is now considered essentially worthless rubbish.

Perhaps someone with some one with insight could shed some light on the rarer item that we could pass to our (great great great great ...) grandchildren that would be worth looking out for?