I have a very nice salad plate that's signed but I can't figure out anything about the artist. Would anyone happen to know anything about it? Here are some images. Thanks in advance for any tips.

Great to see a bit of art pottery pop up on these forums. It's an area of ceramics that I really love. Hopefully I can give you an idea of what you have.

First thing you can do to make sure what you have is a bit of art pottery is to confirm the decoration, the birds, the writing on the front is on top of the glaze? It should feel raised to the touch. It would be unusual for it to be under the glaze so for it to have been painted and then fired. The reason I am saying this is that in the late 19th century it was very common for artists and keen amateurs to take blanks (plain ceramic plates / chargers) and decorate them. Most of them would not then be fired again, so would not have another glaze on top of the decoration. These items would then be submitted into competitions. The most famous competition in London was at Howell James & Co but others existed around the UK.

These competition ceramics can be easy to spot. Often they have paper labels on the back to say the competition they had been entered in. But nearly all of them share key points with what you have. They vary a lot as you would expect from some stunning portraits to very basic amateur scenes. But they are nearly always dated as yours is (1886), signed by the artists as yours is (signed R.) and painted on blanks (yours by H&Co). Even without a date you can often attribute them but the subject matter. Just like most people can spot 1960's fashion, you can with experience spot other major design eras, like the major Asian influence on 1880's designs (as you can see on your plate) or the revival of all things gothic/medieval you can see in art/design from the same period.

The value is all in the quality of the artist but if you think of it in the same way as a paper drawing from the same date you won't go far wrong on what it is worth. It is also a reasonable guess that it was never part of a big service and must likely a one off. A nice thing and collectable.

Wow, I've been posting on all types of forums for a long time and I must say that is probably the best and most informative answer I have ever had. Thank you so much for you reply and the time you took to write it. Its very much appreciated. One of the girls in the office just said "that guys a rock star". Really appreciate it. Cheers.

Just trying to work out the H&Co. If the date is correct, it would be just to early
for Hill or Hammersley, (Staffs), The body looks to be porcelain, so unless it is US
manufacture, I would suggest it is German.

H & Co with the L underneath I believe to be Haviland Limoges.

I beat you to it!

Cool find guys. The wiki indicates it was an American who set the company up and was involved in shipping the finished items to the states for sale (link below). I guess it is probably an American bit of competition ceramics then. I know they held them, just like the UK but don't have any info beyond that. Could be fun to find out more. I am sure with a bit of digging an awful lot can be found out.

Mordeep wrote:Cool find guys. The wiki indicates it was an American who set the company up and was involved in shipping the finished items to the states for sale (link below). I guess it is probably an American bit of competition ceramics then. I know they held them, just like the UK but don't have any info beyond that. Could be fun to find out more. I am sure with a bit of digging an awful lot can be found out.

That makes sense since I'm a Welshman living in America! You beat me to it studio-pots LOL.

Thanks guys. Thank you all.

Stop me if you think I'm being over-imaginative, but back in 1886 "Japonisme" was all the rage and someone's been trying hard (but with little success) to paint your plate in a Japanese-y sort of way.  I was staring at the pseudo-Japanese characters on the right of the plate and thought I could make out the word Hasmer.  I looked it up and there's a Hasmer Lake in Jackson County Wisconsin.  So I wonder if your plate bears a fashionable oriental-style rendering of a mid-Western Lake?

OK, I know it's a long way from Atlanta, but at least it's on your side of the Ocean.

I had a look at your Hasmer lake, it's very pretty but I can't see a mountain near it.
I most likely its a version of the most famous Japanese image I can think of, mount Fuji. 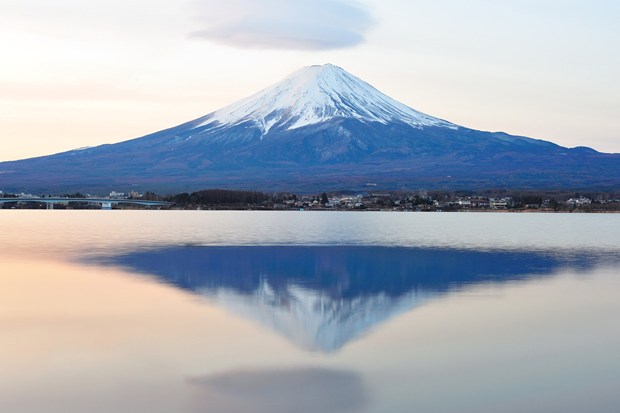 But you got me thinking and although Hasmer did not give me much luck. If you change the M to two N's you get Hasnner. A surname with lots of American connections (but of German origin I think). So I think the chances are that the lady who painted this (nearly always a woman) put her name on the front. Of course we both could be way off LOL.