Stoneware lidded pot with a natural oatmeal coloured glaze. Impressed with Hand thrown at Clevedon Pottery Tel: 872952 and
there is a clear impressed potters seal near the base.
Doesn't seem to exist as a business now, is anything known about this pottery, who ran it and where it was?
I presume this Clevedon is the one in North Somerset. 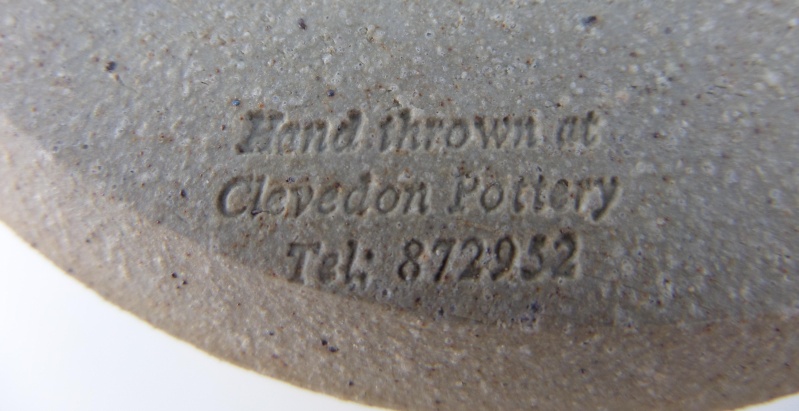 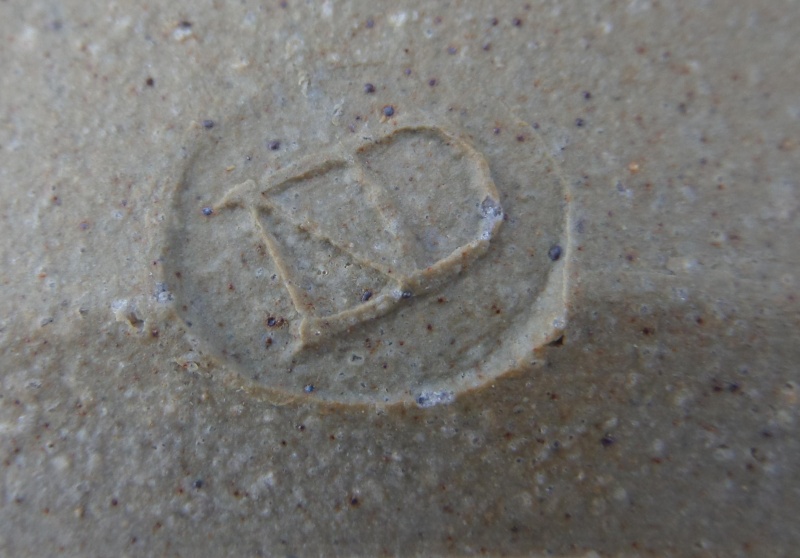 The Fishley Holland run Clevedon Pottery finally closed in 1977 and it was sold to a potter by the name of Norman Darby. He made stoneware there for some years (I don't know how many) until illness forced him to retire. I assume that might be his mark?

After Darby the site became a craft centre and pottery was produced there by John Bishop of Sheldon Pottery, who had started out with Fishley Holland.
_________________
Now you should know by now that Potty and I need to see your bottom - we're funny that way!

Thanks studio-pots. The mark does appear to be based on the initials of Norman Darby ie: ND.

I've come across other pieces which have a mochaware decoration.

Googled Clevedon and came across this article about Fishley Holland

Past & Present History
Probably some of the most prolific potters throughout history and present day are the Japanese and oriental potters. Many of the techniques that potters are familiar with today have come from the orient. I also have a great interest in Romano pottery, yet many of their techniques came from the Greeks.

Bernard Leach renowned artist of ceramic pottery influenced a great many potters in particular with regards to slipware. Known to some as the father of potters, he trained in Japan under the master potter Kenzan. In Flemington – North Devon, he had an association with William Fishley Holland and had offered William a job. But before we talk about William, let’s go back a few generations.

The Fishley family had been peasant potters for many generations. They were known for making their own glaze recipes of which other struggles to copy successfully. The first Fishley potter was George, (born 1771 - 1865) was quoted as being “the most important single earthenware potter of the nineteenth century”. He never stopped work until the day he died. He employed  four women and eight men which was rare in those days (to be employed, other than farm work). George Fishley pioneered the art of Leaf Resist which I learnt to do at the age of 13.

Isaac Button could throw a ton of clay in a day. Watch video here.  The last true English country potter, he threw a lump of clay on to the wheel, pulled it high, then cut it off with wire in 22 seconds. In an hour, he could turn out 120 pots. In a day, 1,200.

In his day, speed was essential. Even before the packaging revolution, household pots and jugs made from clay were treated as disposables
Michael Cardew (Born 1901) used to watch Edwin Beer Fishley throw pots. He did this every time his Dad would take him over to the Fremington Pottery. He called him Mr Fishley. He would have liked to have been taught by Mr Fishley, but barely the age of ten, he was too young. Mr Fishley died in 1911. None of the sons of Mr Fishley became potters as it was a ‘dying industry’. The grandson though, William Fishley Holland did become a great potter. The Fishley – Holland association came through the marriage of Isabel Fishley and George Holland. They named their son William Fishley Holland.

Michael Cardew (YouTube)learnt to throw pots under the tuition of William Fishley Holland. Later on in 1923 Michael went to work with Bernard Leach and became his first pupil. He Michael started up his own pottery in 1926 and used earthenware (Terracotta) and slip decoration. But he never forgot his friends and used to go to Clevedon to visit William Fishley Holland and stay with him.

This tradition of earthenware (Terracotta) and slip decoration had been going on for 300 hundreds years + in Devon according to records – but it was phasing out. Now, we are finding that people visiting the Gallery to see Pittenweem Pottery just love the old tradition without contrived techniques.

William Fishley Holland (Grandson of Edwin) could not take over the pottery in Devon, even though he had made a verbal agreement to buy it, because Edwin forgot to write a will. William still kept the tradition of slip decoration on earthenware alive. William took up a job at Braunton where all of his experience was much in demand. . He was taken on to build and manage a new pottery there, including sourcing clay – digging the pits, kiln building and repair. Eventually, the pottery had to be sold due to the depression after the war. William now had the opportunity either to work for Bernard Leach or to move to Clevedon, Somerset, and work with Sir Edmund Elton on the estate at Clevedon. Sir Edmund Elton was a potter and already had a good reputation. You can research his work by looking for the highly collectable Elton Ware.

William Fishley Holland and Bernard Leach remained excellent friends. Bernard also was helpful with glaze issues. He would visit William at Clevedon and was impressed at the 1,000 pots per day output and the putting on of handles on 200 mugs in an hour. The Holland handle is quite impressive.

Sir Edmond Elton then died and William Fishley Holland continued for a while helping the Elton family before he set up his own pottery in Court Lane, Clevedon -not far from the Elton Estate (half an hours walk). Fishley Holland remained the brand name. Bernard Leach came to visit his friend Fishley

Holland and reported back to his factory workers that Fishley was producing 100 pulled handles in an hour.

William’s children were George, Constance, William (Bill) and Isabel. I don’t know how the name ‘Constance’ was arrived at – but all the other names were in generations past. The children helped to make the pottery a worthy place to visit. George and Isabel left school and worked in the pottery, while Bill trained to be an architect. During the war, colours in glaze were prohibited – only white ware were produced. But William Fishley Holland’s had substantial amounts of coloured glaze and had secret cues of people waiting for goods to come out the kiln. Scrafitto was also a popular technique they used. They had almost 100% firing success each time with their coal fired muffle kilns and bottle kilns. William was patronised by the late H.M.Queen Elizabeth in 1948.

William would make replicas of older works and impressed Bernard Leach on his further visits. Some of his work can be seen in the British Museum, and the Victoria and Albert Museum.

After the war, George came back into the pottery with new ideas. His Dad worked late into his seventies but arthritis got the better of him eventually. George modernised the pottery – putting in electric kilns etc and then moved to Dunster pottery in 1958.  Later he became an educator at Minhead.

I remember Bill talking about Peter, but he had moved to Jedburgh on the Scottish borders by the time I came into the pottery. He carried on the tradition and brought the tradition to the borders.

Bill (William) Fishley Holland was son of William Fishley (deceased) and he took over the running of the pottery, but he did not throw pots. I worked for William Fishley Holland from 1970 – 1973. It was his idea to take on John & David Bishop who did their training (in the 1960’s) with Fishley Holland pottery. In 1973 they set up their own Sheldon Pottery at the base of the Old Cinema in Clevedon. I went to work with John & Dave Bishop and left in 1975 to move into the world of electronics and sales. Later, Charlie started working with his brothers John & Dave. Later on Charlie fell ill and Dave moved on to. John took the business back to Court Lane where he did his training. By this time, the Fishley Holland Pottery had already closed (1977). Just along Court Lane is Yeo Pottery – set up by one of the potters who worked at Holland’s. 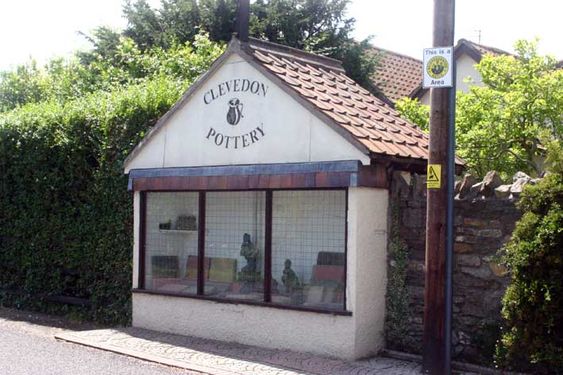 Setting up Pittenweem Pottery, Steve takes these traditions over the border. Being situated on the Grangemuir Estate seems appropriate as Grangemuir House belonged to the Douglas Clan and head of the clan at present is David Harrington Angus Douglas, 12th Marques of Queensberry, who was Professor no less, of Ceramics at the Royal College of Art in London.Trades like these have moved all over the world and so now we are seeing influences from every neuk of the globe. Maggie, a Fifer all her days, manages the Art Gallery amongst other duties.

Of course, Fife has a long history of Potteries including Wemyss Ware and David Methven's  Kirkcaldy Pottery which were among four in Kirkcaldy.

To the left is what you could call the old shop window of Fishley Holland's pottery. Behind all this was quite a stretch of land with Bill Holland's home and lots of outbuildings made of wood and tiled roofs. There was also a museum of all their early work there. With the advent of electric kilns, Holland’s Pottery had no further need for the wood fired kiln (which Peter built) and they asked me to dismantle it. It was quite some height and seemed like I was destroying history. I’m sure the new potters of today would agree. We use an electric kiln here - but I can see the future in wood firing again as it creates more possibilities.

Honest, unpretentious English country pottery has finally made it to the saleroom. By John Windsor "The Independent" http://www.independent.co.uk/life-style/none-of-that-fancy-stuff-1582463.html