Can anyone please provide information about this plate made from red earthenware and inscribed on the base H. C. Ullrich.
There is some crazing to the glaze on the decoration.
Sounds German to me.
Diameter: 18cm
Height; 2cm 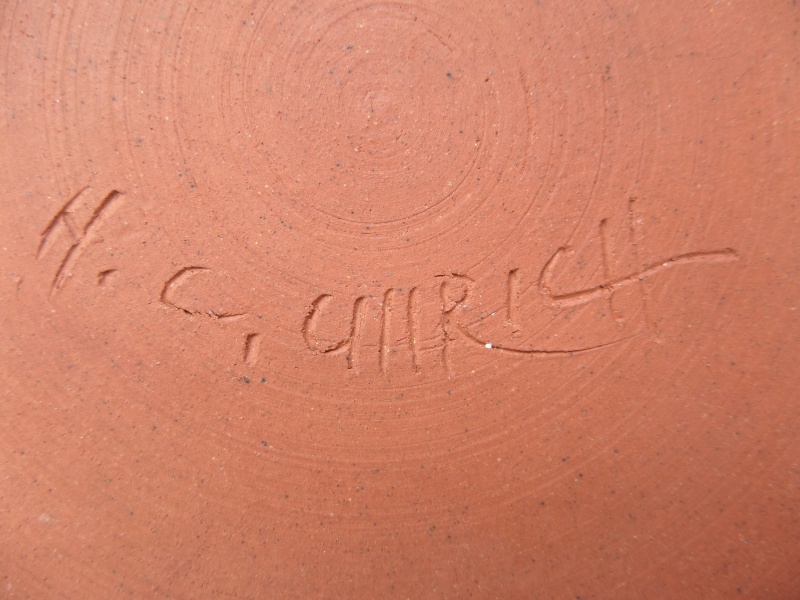 Looks like a piece by Hans Christian Ullrich who was a slipware decorator at Wetheriggs and which are usually stamped ULLRICH. I guess he did a few for himself on the side.
_________________
Carrot cake is just fake cake

I live in the North of England and see quite a lot of Wetheriggs pottery. Nothing like this though. A good lead to follow, thanks Naomi.

Hans Christian Ullrich, born in 1950, began working in ceramics in the early 1970s at Wetheriggs Pottery, near Penrith, one of the last traditional country potteries. He trained with Harold Thorburn, manager of Wetheriggs, who was still making traditional English slipware in his seventies.
Some of his work displayed a close link to the slipware tradition, using a honey glaze over terracotta clay with white slip patterns.
Other pieces link the English style with an Eastern European style, by combining slip trailed designs with more brightly coloured glazes.
He originally studied painting and sculpture, which is reflected in the pictorial designs and in his interest in producing larger scale ceramic murals from handmade tiles.
He has been potting on his own account in Kendal, Cumbria, since 1985.
Recently Hans has been using his skill in working with slips, to produce more abstract pieces, some of which are inspired by nature.