I'll post this and if anything is wrong then it can get moved/edited but I'm thinking that a piece may turn up one day.

"At the end of the 1940s, Pablo Picasso (Spanish, 1881–1973) started creating ceramic works. At the time, Picasso spent his summers on the Cote d'Azur in the South of France. Following earlier trips to the Riviera, where he was inspired by the clarity of the light and the bright Mediterranean colors, the artist visited Vallauris for the annual pottery exhibition in 1946. Impressed by the quality of the Madoura works, he was introduced to the owners, Suzanne and Georges Ramié, who welcomed him into their workshop, and gave him access to all the tools and resources he needed to express his creativity with ceramics. In exchange, the Ramié family would produce and sell his ceramic work. This collaboration with the local ceramicists spanned 25 years.

Picasso went on to create clay pieces throughout the last years of his life. He initially found that working with clay was a relaxing summer respite from the more strenuous demands of painting. He began with simple utilitarian objects, such as plates and bowls. He then proceeded to create more ambitious forms, such as pitchers and vases, where the handles became facial or anatomical parts of the animal depicted. The subjects are very creative and playful, and include Greek mythological figures, animal shapes, such as owls and fishes, corrida scenes, and face motifs, among others."

There is so much movement in this piece in the V&A that i would not even know how to pick it up. 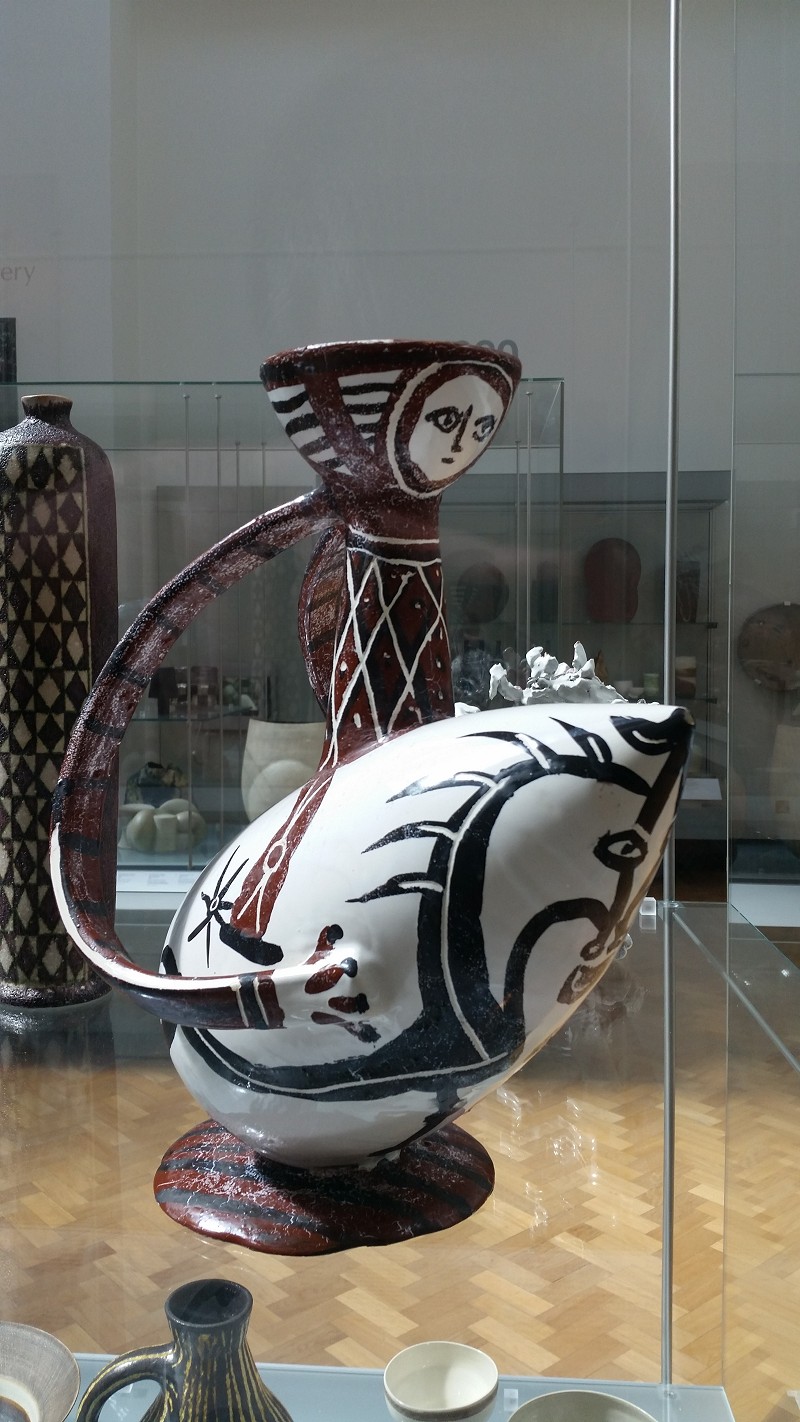 Yeah should be in EUROPEAN!

There is a huge selection of his ceramics in Leicester..donated to the Gallery by Lord and Lady Attenborough. I keep meaning to go there.

Actually sat behind Richard Attenborough I a Bonhams auction which had Piccasso items followed by Studio Pottery. Must have been 15 years ago. The collection in Leicester is wonderful by the way, lots of the Attenborough bequest on display.and its a very nice Museum.

Images of one of the two of these that I owned in the past.

the story with Madoura is a little more complex.Picasso was monopolising the facilities and Madoura had financial problems ,against the advice of his dealer Picasso authorised the production of "Editions" which are effectively copies of his work, to help finance Madoura.

I think that in Art terms the "Editions" and very much in the same league as limited edition prints that are produced by skilled printmakers rather than the artist.
_________________
Now you should know by now that Potty and I need to see your bottom - we're funny that way!

SP yes, I'm thinking it's all I can aspire to. I'm unlikely every to own a piece made by his own hand methinks.

it's true picasso editions fetch good prices and are very nice and a good investment, they are what can be found with a bit of luck. I agree that its similar to limited edition prints (also worth far less than origional paintings) except that prints are usually made as a print rather than being a copy.

I'll just quote Pierre Staudenmeyer "Picasso's voracious appetite for pottery making, to which he devoted himself almost exclusively for the best part of two years,put the atelier Madoura on the brink of bankruptcy. This led to the idea of making editions of some of his pieces despite objections raised by one of his dealers who took a very dim view of picasso's name being connected with production runs of "decorative objects"