Hi I have an oil painting by Ambrose of a ship.I wonder if anyone could tell me if it's an original please.Thankyou.

Sorry for the delay.   I have now posted the pictures. 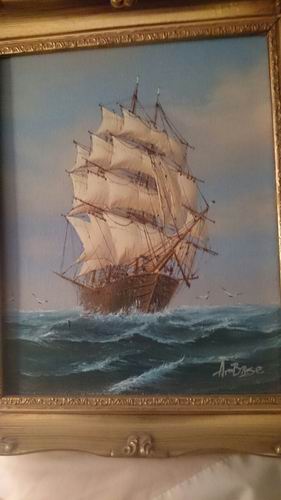 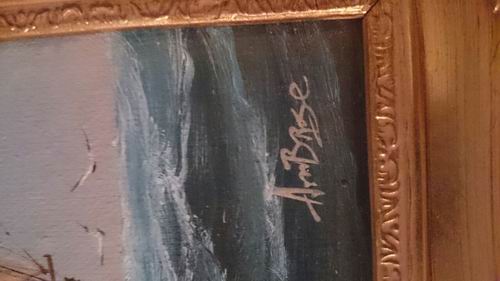 This artist was certainly prolific. Seems he shared a surname with a mid 19th Century seascape painter from America called Ambrose Andrews, but apparently this guy was a later 20th Century painter called John or Daniel Ambrose from Florida.
Anyway, here's the discussion about him

Not sure who it's by but what I can say is that there appear to be a number of these around and their value on the secondary market is less than £50.

Naomi is correct in that there was an American 19th century painter, who painted some pictures with tall ships but nothing like this. He generally did classical landscapes.

There was a British artist called John Ambrose, who some of these paintings on the internet are attributed to, and because of that I thought that this was by him. However, further investigation has revealed that this Ambrose, who died in 2010 and was a Member of the Royal Society of Marine Artists, painted coastal views and often of Cornwall, again in a very different style.

The Daniel Ambrose, who Naomi mentions has again been linked on the internet with these "tall ship works" but he is currently active and his work couldn't be much further from this.

Therefore I think the likelihood is that these canvases of tall ships in rough seas are factory produced in the Far East.
_________________
Now you should know by now that Potty and I need to see your bottom - we're funny that way!

Yes, that was my first thought before googling the name, but on a process of elimination I also think Far Eastern import is the most likely answer. Of decorative value only.
_________________
Carrot cake is just fake cake

Ok thankyou for your input.

These are produced in the Far East I am afraid. Most cetainly not John Ambrose (I own a couple of his). Sorry to bump an old thread but you see the Ambrose maritime pictures up for sale regularly and even auction houses attribute them to John Ambrose at times. They are worth around £40-50 each for their purely decorative value and too be honest they are generally a bit better than other Far East pictures.