A beautiful sculptural piece I found at Stoneleigh, Warwickshire some eight years ago. It measures 13" across and 10" high.

James Campbell was born in Cawdor in Scotland and was taught and influenced by another great British ceramics artist, Gordon Baldwin before going on to the Royal College of Art in London.

I liked his early work like this but the painted dishes that he does these days look OK but seem rather pointless in comparison.
_________________
Now you should know by now that Potty and I need to see your bottom - we're funny that way! 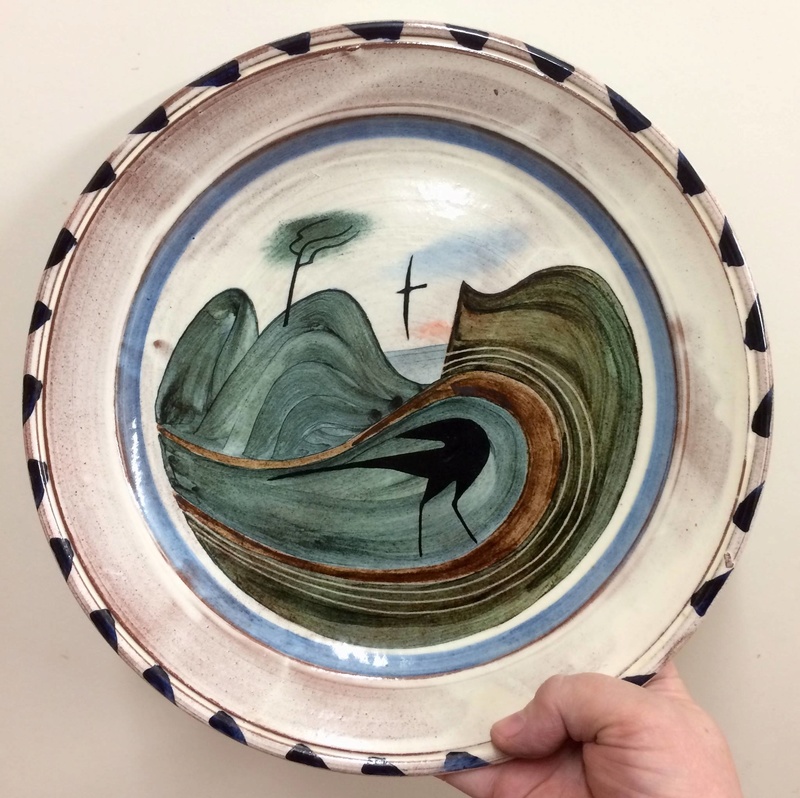 In the special and magical places of my childhood in Wales and Scotland, I was always drawing. When I was very small, the images were of aeroplanes; it was 1944 and there was an aerodrome near our house.
The landscape began to appear when I was in my teens and away at school in unhappy exile from these sacred havens, which always offered a place to travel inner worlds of dream, joy and peace. The pain of separation and the longing to reconnect have been dominant forces in most of my subsequent work.
Over the years spent as potter, teacher and draughtsman, I came to love drawing, variously, as a tool for generating ideas about shape, for speculating about form and image, and as a language for putting down images of landscape observed, remembered, and imagined.
The pastels and watercolours have developed over time, from sketchbooks full of attempts to capture the poetry of these special places: they are meditations on landscape. Some are closer to the external facts, some closer to the inner world. The bird is a frequent presence; it often seems to be searching for something within the landscape, and it is probably me.
I’ve been making pots since about 1957; they were initially sculptural, slab built forms, but in 1983 the need to furnish myself with plates, bowls and jugs, along with a six week visit to Japan, prompted a renewed interest in the vessel, and since then most of my work has consisted of platters, dishes, jugs, jars and related shapes.
I try to make pots where form and image coexist as equal partners. They are in different languages, and to bring them together into balance is an endlessly fascinating puzzle.”
His own words from the twenty twenty gallery.