The event this coming Sunday, 11th May 2014, will be the last fair there to be run by Nelson Events, who have sold it to IACF (International Antiques and Collectors' Fairs).

They will be holding their first fair there on Sunday 14th September.

I do remember back 20 years or so when "Ally Pally" was the fair that many people in London looked forward to but can't imagine those days will be repeated, despite the new owners.
_________________
Now you should know by now that Potty and I need to see your bottom - we're funny that way!

Went there some years ago.Quite an attractive venue,with lovely views over London.
Fairs ain't what they to be...

The London Alexander palace antique fair is this Sunday (13th) if anyone is tempted. I will of course be going, for Londoners it is about the best we have for selection and variety. It kicks off at 8am at the crazy price of £12. To be honest I would not pay that, stall holders are not in a rush to set up and you would get to stare at half built stalls for the extra money. Arrive at 9.30 and the entry drops to £6 a bit more pocket friendly. Its been several months since the last one so I have high hopes that lots of things I have not seen will have dropped onto dealers stalls. Usually there is a great selection of glass and pottery.

Got any owls? Will have money if Found

Sorry no owls on the stall but between my stall and my friends next door we will have some destroy your wallet from 10 paces Ruskin, Pilkington and Martin Brothers amongst other things. I also have a fair amount at £10 just to confuse

Must admit my friend and his friend are sharing the stall next to mine and god they have some beautiful bits of pottery. Mines a bit more of a spread from £10-£700, studio to art pottery. Fingers crossed people visit but hand on heart it is a nice view (we set up this afternoon).

Stood for years, until my takings dropped below the expenses.
Pig and Whistle days, has anything changed, really??

i'll make the next one....mordeep hope you are to !

denbydump wrote:Stood for years, until my takings dropped below the expenses.
Pig and Whistle days, has anything changed, really??

It went through some bad years and like you we left when we could not cover the costs. But it is picking up now. New organisers and very well advertised. Gets big crowds again so fingers crossed.

Mordeep - you looked bus, whenever I went by you had punters.

How did actual sales go?

I was the corner of the row stall with my father and the stall next to us was my friend Baz who shared it with Richard his friend (he had about 20k of high fired Ruskin and a stunning Martin brothers fish vase). Most people thought it was all one stall. Not sure if you did.

Started off a bit slow to be honest though and by 10am was getting worried. Not sure we had sold anything by then. But that fair has never let me down. Got a few nibbles and people started buying the studio under £50. Then some of the older art pottery started moving. In the end it was a very good fair. Think the second to last sale just before the end was the biggest with a great Crackle glaze Elton vase finding a new home. The lady who bought it spent a while looking then went away for several hours to think. As I am sure you know most who do that don't come back, she did.

Did you find anything? My only purchase was cheap Burmantofts vase, my dad picked up a hand painted pottery plaque with cherubs from 1878 (it was dated) by very little for us that added something to what we had and filled the £50-£150 price point we struggle to keep.

I usually do a quick run round when at fairs just to see if anything jumps out at me then go round again slowly. I understand what you mean about not coming back, there is that bit in the conversation when the dealer seems really keen and thinks he's got a sale and you have to say that you'll think about it.....'it's a bit rich for me but I may come back if I don't find anything else'.....I don't go back.

I had a strange one. There was one thing I wanted on ebay a bit of Ambleside. I like Gorge Cook as it's a bit unknown and I keep seeing new and wonderful strange things that pop up - never to be seen again. There was a king/queens dish of two birds with  crowns on ebay a month ago that I was certain was right (not marked...but looks right to me) I only put in one auto snipe bid - last seconds. I make my mind up and have one reasonable bid on things I want. No going crazy.

I lost this bit of Ambleside. Underbidder. I need to start a new thread with the title "AAAAAAA AAAAAAAAAAAAA RRRRRGH GHGHGHGHGH£$$£%$ $%$ B&$T&^%$!!!!!" Where I can let off steam on Sunday evening.

Anyway there it was on a dealers stall. I had to go against everything I stand for and shell out even more for it. Stupid I know but hey it's only money. I also got a large Stavangerflint 300mm triangular dish with the woman with earrings in good nick and a few small bits, Rye, Briglin etc

It's odd but some of the things I've bought at fairs I've been really pleased with but they have turned out not so good ....then other things when I go them home I 've wondered why I bought them but after six months or a year I eventually find they are worth a lot more and have an interesting history... so only time will tell.

I thought there was not much there. Most shows there are some things in my price range that I really want but are simply overpriced and have to be left. But didn't see anything that shouted at me (apart from the two I bought). Some things seem to have disappeared ...celtic, parkinson, sydenham, aldermaston, waistel, wallwork, stig .... all gone :(

I agree with Aldermaston. I can't seem to find it to buy at the moment. One thing I wanted to ask you is about Briglin? In the mountain of studio I bought a few weeks back was various Briglin items. Not put them out as I have no idea of demand or value. Do people buy them? If so will drag some out for the next Alexander palace.

Send me a photo and I'll tell you if anything is interesting. 95% is not. Standard churn. Do look out for anything hand signed or dated as these are very rare and will go like hot cakes.

Here is the sold items on ebay - the John Gielgud is Briglin 1958 but IMO falls into the Parkinson collectors bag and typically goes for circa £1000 if they every come up.

Yep it's on again this coming Sunday 6th December.

It's pretty much the last fair before Christmas for most people so expect everyone to be bringing out the big guns to avoid a microwave meal on the 25th. A couple of friends of mine, my father and I have combined to make one huge stall across several  tables. It will probably be one of the best display of English art pottery shown at any fair this year (with some studio to hit the lower price points). Fingers crossed we get the buyers out in force. Feel free to drop in and have a look around if your in the area

Missed it. Did sales go well?

One question - are there any youngsters buying turn of the century stuff? I know it's a generalisation but are most of your clients at least middle age? If not older.

It was a good fair, not been let down by Alexander palace yet although you do have to hold your nerve as they never buy early.

As for your second question. I could write a book on customers at these fairs. I could write a bigger book on sellers at these fairs and how they appear to do everything in their power to drive customers away with do not touch signs, dismissive stares and prejudged opinions on who they will stop reading their newspaper to serve and who they won't. The simple fact is you can't assume anything about anyone who takes an interest in what you sell. You listen and learn to what they have to say.

I nearly always ask if the person looking knows what they are looking at? I don't work if they can afford it from any response as many do, I use it to decide how much information they need to hear to improve the chances of them buying. Studio is easier to sell to younger buyers due to its lower price points and the older a customer is the more likely to know a bit about who made an item. But those older customers also more likely to have stopped buying and are now simply looking. Because it's in London and has a retro fair attached you see a lot of well dressed 20 somethings about. They get attracted to studio and brightly glazed pottery even the stuff produced over a hundred years ago (the fussy heavily worked Victorian art pottery is less attractive to the younger buyers). As a fair it's a good mix of ages and that helps smooth out the demand so less chance to strike out and sell very little.

I had planned to go but had "an offer I couldn't refuse" of a studio pottery nature, which turned out very well for me.

Wanted to add the last fair had the best selection of art pottery for sale in one place I have ever seen. If your a fan of Martin brothers you had 4 dealers you could have bought from and spent something close to 500k if you had the desire. One guy had a cabinet to make your mouth fall open with two shelves of Martin brothers and four of William De Morgan. It's not often you get the chance to see several Martin brothers Wally bird tobacco jars up close or have the option of several different De Morgan chargers. It was a bit silly and I was tempted to make a smash and grab

I will also tie a knot in my hankie. I simply forgot the last one. What a numpty

and I love Martinware - can't afford it but love it. 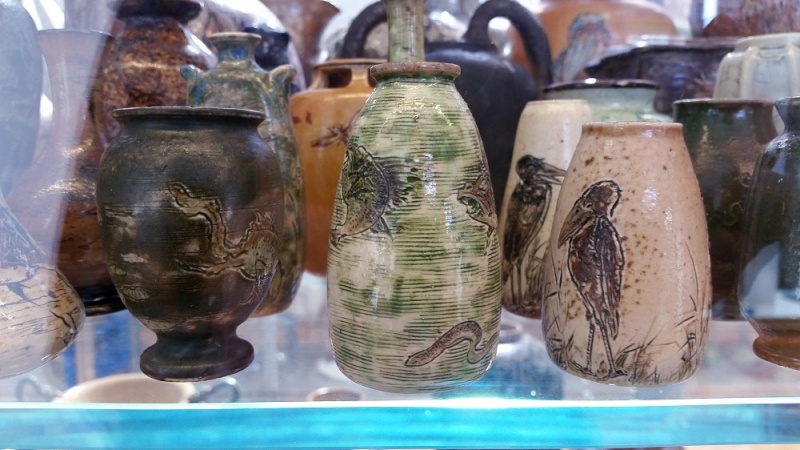 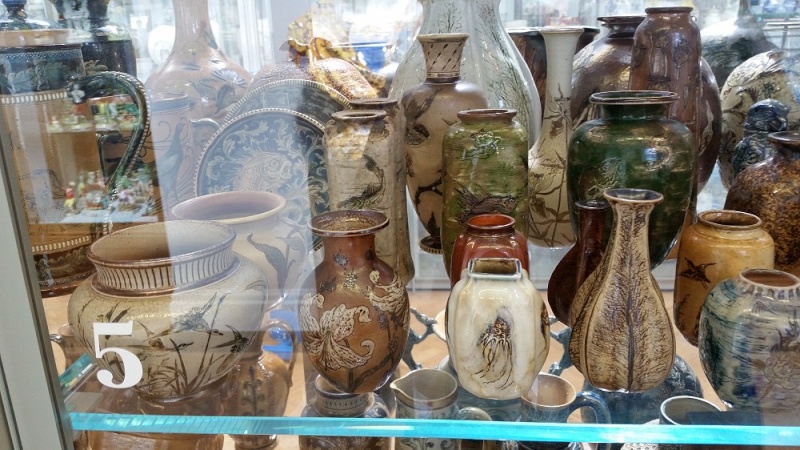 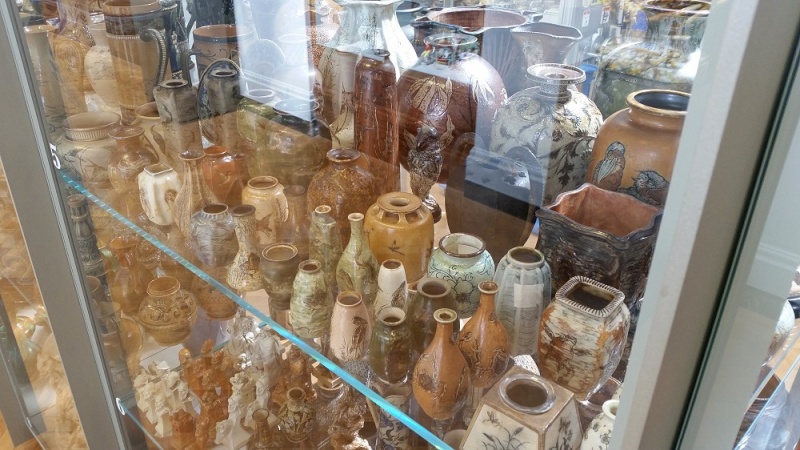 Yeah the V&A has stacks of the stuff.

I've remembered that it's Ally Pally next Sunday and, unless someone contacts me about a cheap job lot of Lucie Rie's that I can only see and buy that day, I should be there.
_________________
Now you should know by now that Potty and I need to see your bottom - we're funny that way!