I thought that this might be Aldermaston, any thoughts please on this and if possible potter or date. All suggestions appreciated John 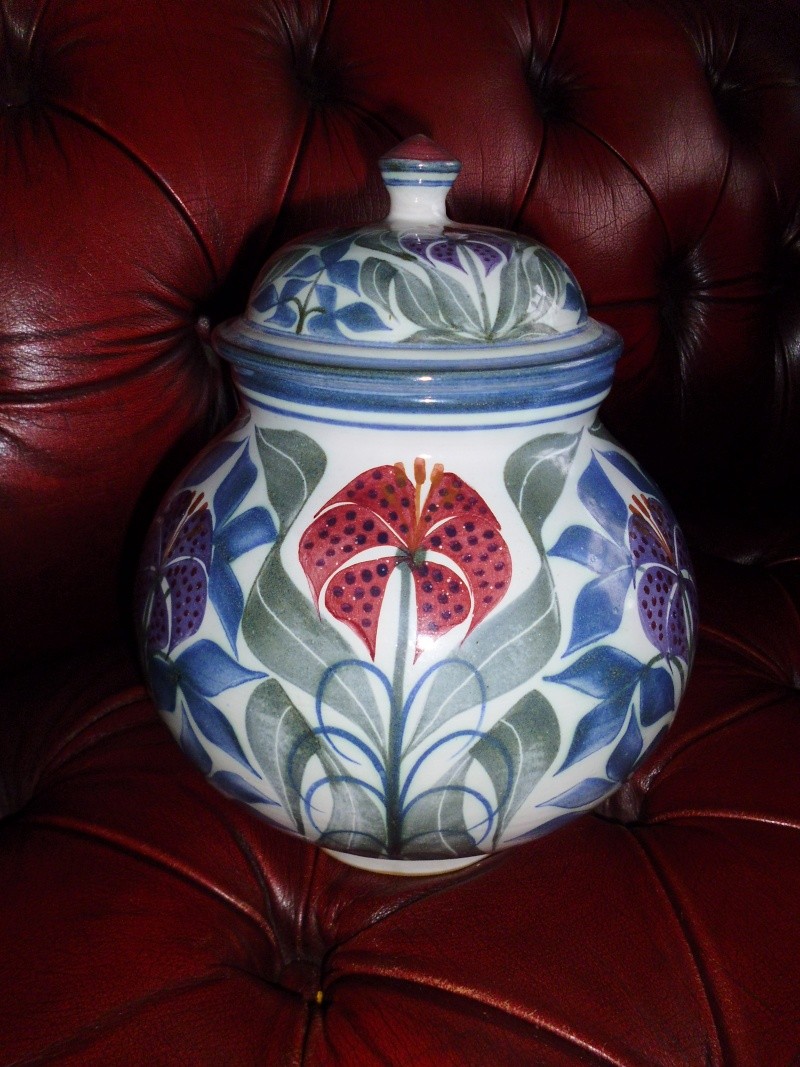 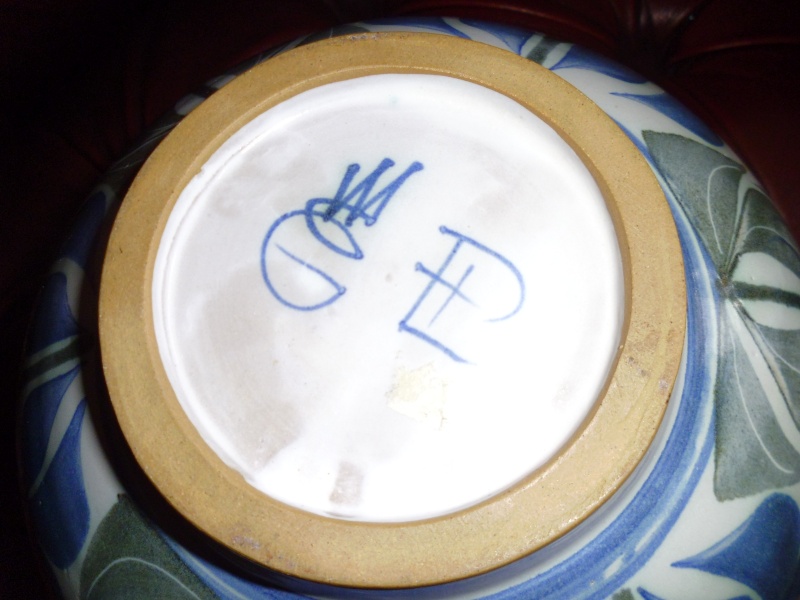 I have purchased this large lidded pot and to me it looks its from Aldermaston but I dont recognise the design or artist - can anyone help with an artists name or to confirm that it is from the pottery? many thanks

Its Lawrence McGowan.The second mark is the year date for 2002. He spent a couple of years at Aldermaston, 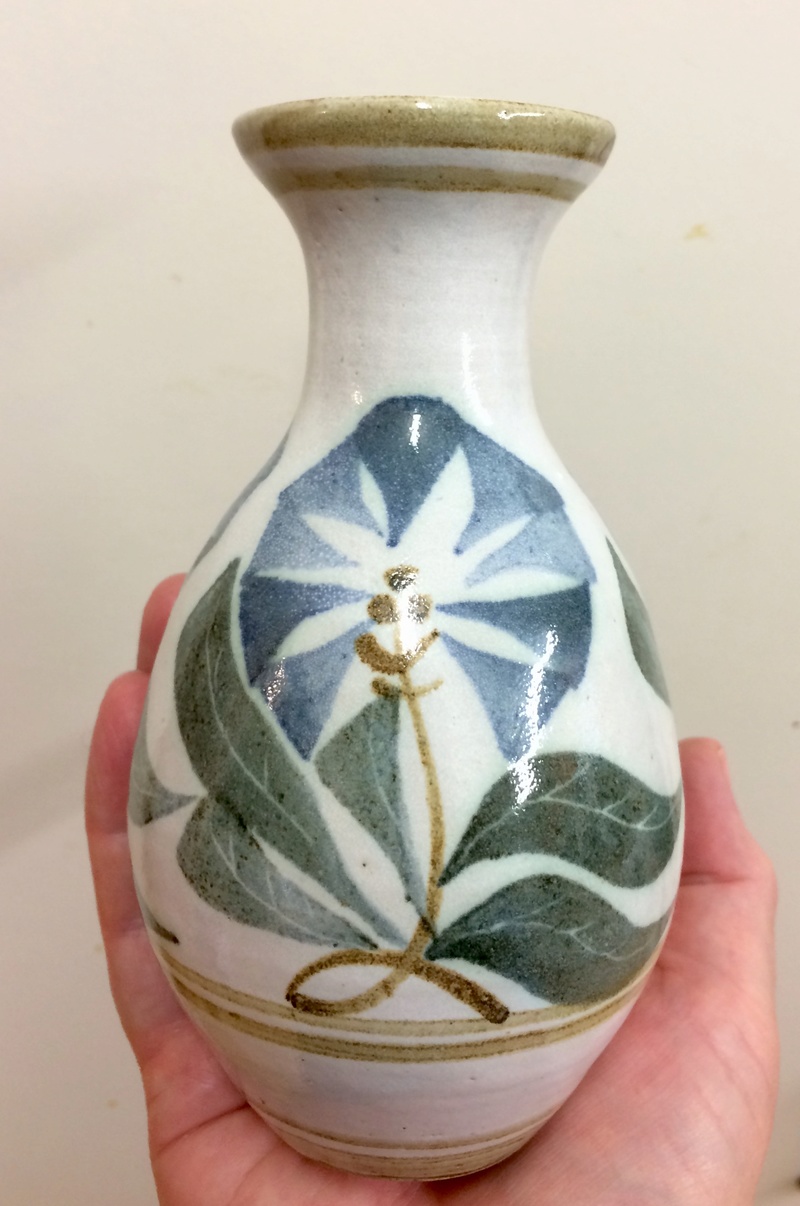 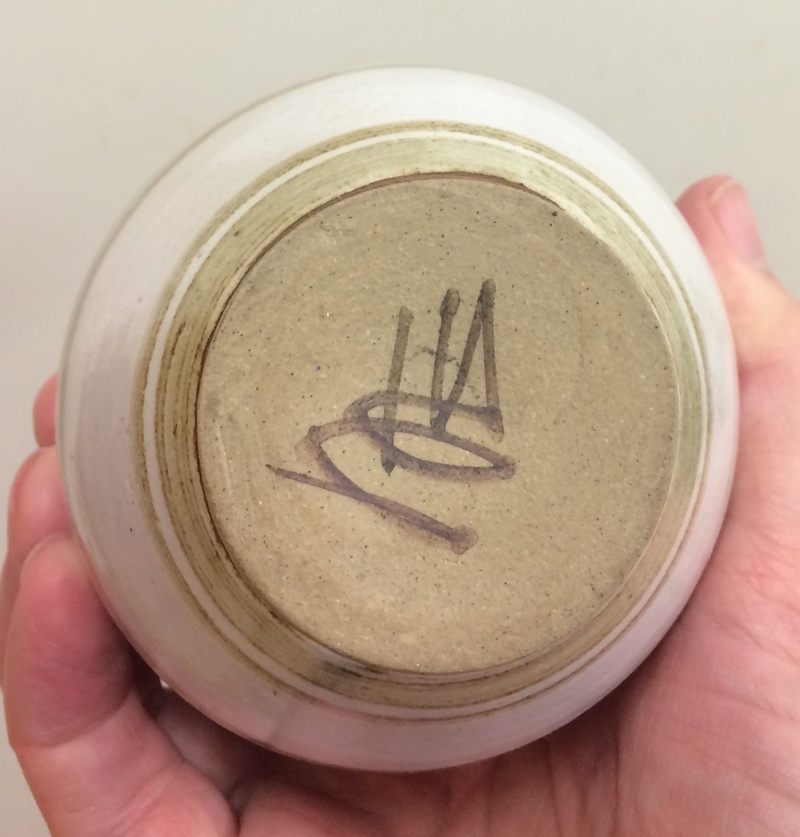 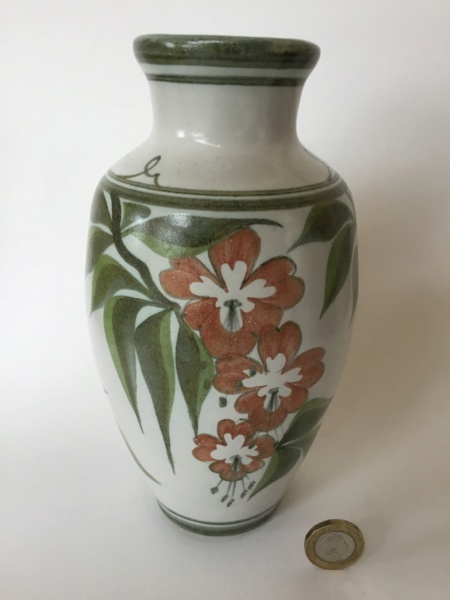 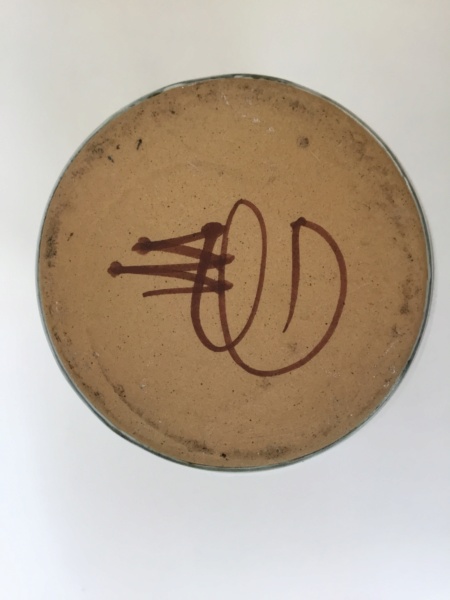 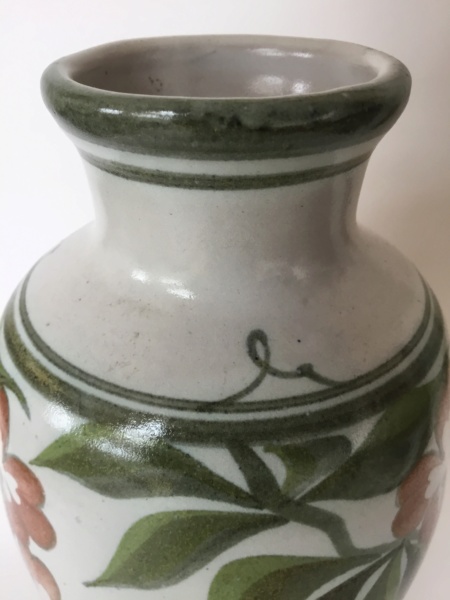 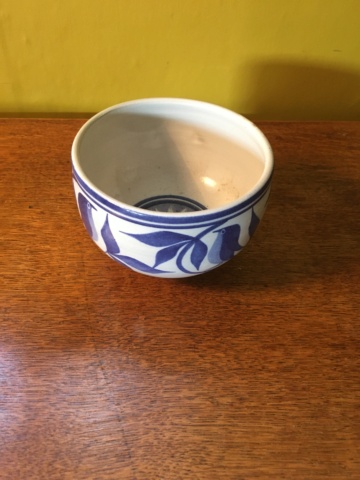 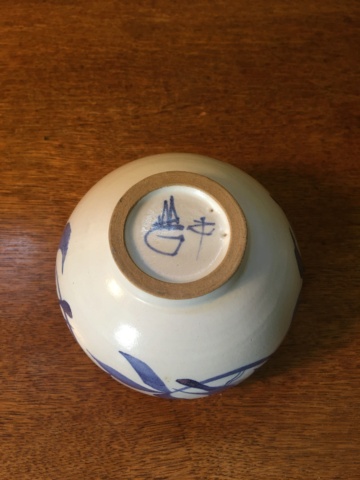 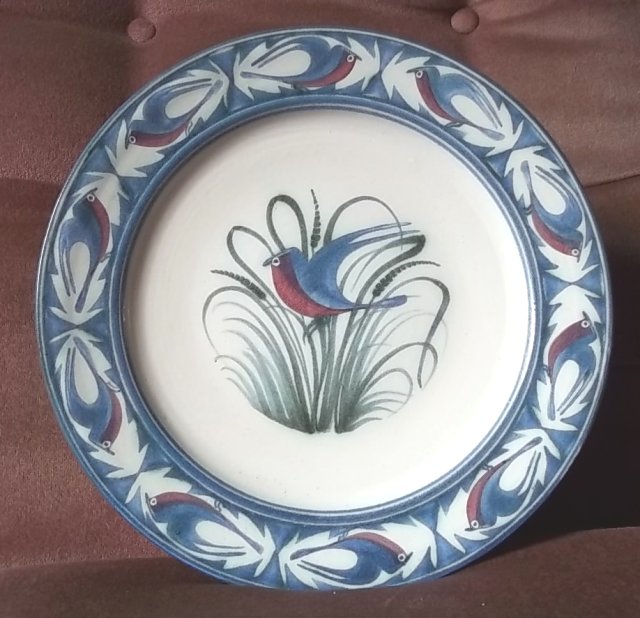 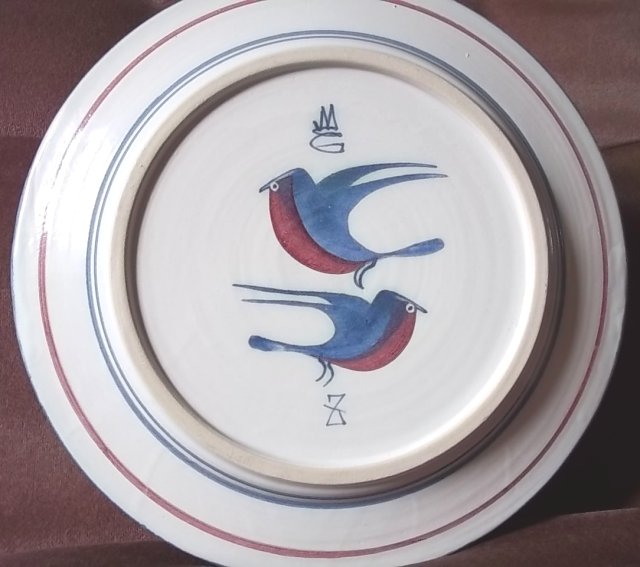 I remember meeting Laurence at Pottery festivals 25 to 30 years ago with his work, long after he left Aldermaston, where he trained. I suppose that his work remains very much in the Aldermaston style, hence the link in the title here. However, to me it suggests that his place of training over shadows his actual work, which it does not. For me his brushwork skills are amongst the finest you will find anywhere and superior to anyone else associated with the Aldermaston Pottery.

I would never think of writing Richard Batterham (ex - Leach Pottery) and likewise would not put anything in brackets after Laurence's name. We ought to leave it here so that in the future people don't ask what was that studio-pots nutcase going on about.
_________________
Now you should know by now that Potty and I need to see your bottom - we're funny that way!

OOPS I only added it today after merging two threads.
Mohamed Hamid's thread is similarly titled.

The Aldermaston apprentices will forever be linked to Aldermaston in collectors’ minds, whether they wish to be or not. On a purely practical note, we often have ID requests which say “ looks like Aldermaston”, so having Aldermaston in the title aids online searches

Just to add, Rosemary Land used similar bird decoration on her pottery, so might be confused with Lawrence McGowan's work

I was just making a point on behalf of Mr. McGowan, a quiet unassuming man, who probably wouldn't have bothered about the thread title. I completely accept why the title is, as it is, and didn't think of changing it. All I wanted to do was show that he was more than someone that learnt his skills at Aldermaston.
_________________
Now you should know by now that Potty and I need to see your bottom - we're funny that way!

I noticed Phil had dated one pot, so is there a list of date cyphers he used?

I have just stumbled across the forum by chance. As you can imagine, finding that some interest and discussion had taken place about my work was very gratifying, particularly because of the kind words that been posted. Regards and many thanks to all of you.

You are very welcome. Love your work

we would love to get more information, stories, pictures or just to chat generally to someone who was part of that golden age of studio pottery production
_________________
Making new friends as an adult is hard...because I don't want them.

So plashed out £400 (gulp!) for this fine example Birds Of A Feather plate - 320mm - Not my photos - but I'm sure the lovely woman who hand delivered it to be on the safe side won't mind. If you are going to buy a plate it might as well be a good one. Dated 2007. I sat there thinking how much would a big plate be at Art in Clay later this month by any potter? £200? is double for a really good example by a retired potter that is popular that much? 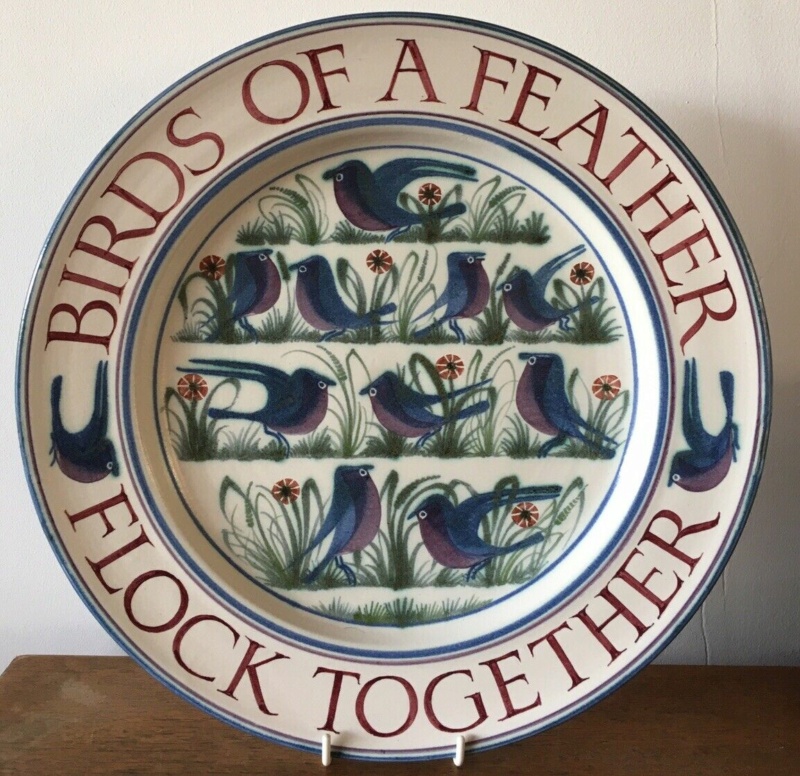 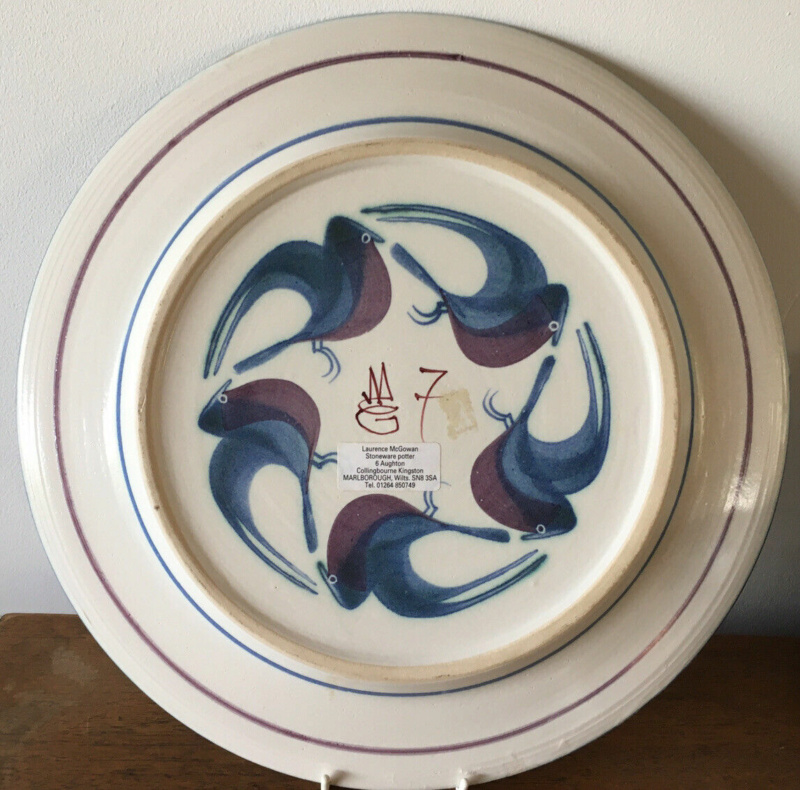 There is also this short article I found - I've linked to OP but delete if I have transgressed.


“Most people, given the right encouragement, tuition and push, should be able to create… I was lucky when I was a boy, I had a friend whose Mum was a very competent watercolour artist. She impressed upon me that everyone can do something. She made me realise that artists can be ordinary people, not anyone special.”

This belief, put forward by ceramicist Laurence McGowan to The Craftsman Magazine in 2003, was born of personal experience. For the first few decades of his life, Laurence regarded himself as very much ordinary. Born in Salisbury in 1942, he was the son of a Glaswegian who had lived through the depression and had a relatively tough life, so despite his success with clay at his school’s potter’s wheel he knew his parents would not regard art as suitable career path.

His parents moved to Australia for some years when McGowan was 16, and he worked as a draughtsman there before returning to the UK and joining The Ordnance Survey. But soon he moved to Iran for a higher salary, and his time in that country sparked an interest in Islamic art and architecture. When he finally settled back in the UK, now married with a child, he decided he would follow his dream and go to art college, but to his dismay he discovered that his periods overseas meant he was no longer entitled to a grant.

Disappointed, he started a series of short-term jobs, and almost by accident took two with established potters - first with Pru Greene at Alvingham Pottery Lincs. and then with Alan Caiger-Smith at Aldermaston, whom he had long admired.

“I knew that I wanted to work for him, and purely by chance came across an advertisement for a job with him at Aldermaston Pottery,” he said later. “I succeeded at the interview on the strength of my sketch book, which I took with me.”

From a stint working as a gamekeeper, Laurence had discovered a close rapport with nature and a sensitive eye for detail which was reflected in his wildlife drawings. “That’s when I discovered that I was perhaps put on this earth to decorate pots,” he added.

In 1979 he returned to his native Wiltshire and established his own workshop at Collingbourne Kingston. Having trained in the in-glaze technique of pottery decoration, he enhanced his thrown stoneware pots with brushwork patterns distilled from plant and animal forms. He also drew on the influence of Islamic decorative arts, and drew on his skill in calligraphy to add inscriptions.

Much of his output was commissioned as commemorative and presentation pieces. He produced a plate to mark the 21st anniversary of the Antiques Roadshow, one for the city of Royston to mark the Millennium, Royal visits and even the Yorkshire County Cricket Club Player of the Year trophy.

This lovely blue lidded pot is one of two pieces by McGowan that the Swindon Museum and Art Gallery has in its ceramics collection – bought the support of the HLF-funded Creative Wiltshire programme. It is decorated with a design of trees and birds.

McGowan retired from ceramics and closed his pottery at Collingbourne Kingston last year, and hopefully will enjoy a long and very well-earned retirement.

22 Crawford St. wrote:So plashed out £400 (gulp!) for this fine example Birds Of A Feather plate - 320mm - Not my photos - but I'm sure the lovely woman who hand delivered it to be on the safe side won't mind. If you are going to buy a plate it might as well be a good one. Dated 2007. I sat there thinking how much would a big plate be at Art in Clay later this month by any potter? £200? is double for a really good example by a retired potter that is popular that much?

If you like it and can afford it, who cares basically

From an investment PoV, his work does seem to be going up and is popular for good reason. I would say his designs are quite "timeless" and are likely to remain popular. But this only matters at all if you think you would sell it, if buying to collect because you love something, my first point stands

Laurence Mcgowan must be one of the very best of the potters to come out of Aldermaston. His work seems to be in great demand, but for good reason! You paid market price. On the other hand you would have paid more than that for a good Alan Caiger piece of that size 30 or 40 years ago!