Bought these two vases in a charity shop a couple of years ago for aesthetic reasons, long before I formed an interest in collecting ceramics.  Have never been able to identify a maker.  Never seen anything quite like them.  I'm not even sure how to describe the glaze, something like a corroded metal patina I suppose with a number of different oxide hues in it.  They're reasonably well thrown though not the highest standard I've seen but the glaze is consistently applied across the two pieces, and being so unusual, it suggests a potter with a high level of technical expertise. They are both stamped SS to the base.  The smaller is 5 inches tall and the larger 7 inches.
Does anybody recognise?

Celadon glazed stoneware or porcelain vase by Stanley Sellers.
I believe he's based in Solihull.

Conclusion to the Stanley Sellers quandary

Quite impressed that he also did the Mander centre in Wolverhampton and picked out the Hepworth sculpture that's there.

. STANLEY SELLERS
31 December 1933 — 5 April 2013 Honorary Vice-President (2008); Friends of Birmingham Museums & Art Gallery
Stanley was born in Bordesley Green and educated
in Birmingham. At 17, he enrolled in the Birmingham School of Architecture, after graduating in 1955,
he joined Coventry City Council, moving 4 years
later to join James A Roberts Associates; who were
the designers of the Rotunda and had their offices
on the top floor. He stayed with them for 21 years subsequently moving to the ISH Partnership for a further 11 years up to his retirement. Stanley’s list of major architectural projects is large and varied; and includes Mander Centre in Wolverhampton with, at the time, a controversial Barbara Hepworth bronze which won a Civic Trust Award; the Solihull Library and Arts Centre which won a Civic Trust Commendation; The Loft Theatre in Leamington Spa; Wrexham Library and Arts Centre, as well as a whole range of buildings in Solihull and Birmingham City Centre.
He was also a talented and respected potter in his own right, a passionate connoisseur, collector of the visual and applied arts, and an incredibly well informed music lover.
In his 20s Stanley was a frequent visitor to St Ives and was a close friend of Barbara Hepworth, as well as socialising with Bernard Leach and many others from within the St Ives ‘School’.
He was a member of the Friends for many years, later serving as Treasurer; he was created Honorary Vice-President in 2008. Stanley continued to support and advised on the Friends events and activities until earlier this year. He was a passionate supporter of the Museum and its work.
Stanley had a supportive 44 year partnership with Richard Butt, a respected Radio3 Producer and long
term Conductor of the Birmingham Bach Choir.
Their home in Solihull was a happy and welcoming environment to their many and varied friendships. They were great supporters of CBSO and Birmingham Royal Ballet and Sir Peter and Lady Knight were friends as were Benjamin Britten, Peter Pears and Imogen Holst.
He was extraordinarily knowledgeable and interesting to talk to on a host of subjects, never losing his enthusiasm and interest in the world about him, he will be sadly missed by many. A week before he died he told one of his cousin’s he had had a wonderful life, had met many great, good and famous people and that, ’that’s not bad for a boy from the back streets of Birmingham’.
Stanley has made a very generous and significant bequest to Birmingham Museum & Art Gallery that is both a testament to his commitment to the Museum and also to his extraordinary life, his excellent ‘eye’, his intelligence and incredible knowledge.
It is hoped that next year there will be an exhibition based on his bequest.
At Stanley’s request his family sold his pottery collection and the proceeds from this sale were split between Solihull Association for the Blind and the Friends of Birmingham Museums. He also included the Friends
as one of only two beneficiaries of donations in his memory.
Graham Allen, A Friend as well as a Trustee of Birmingham Museums Trust
SUMMER 2013 ARTEFACTS 13

Quite impressed that he also did  the Mander centre in Wolverhampton and picked out the Hepworth sculpture that's there.

The Hepworth has now disappeared, officially while the centre is refurbished. But many wonder if the owners are going to cash in and sell it. They already painted it green and gold in a previous refurbishment!!

He left a large quantity of studio pottery to Birmignham Museum, including several Lucie Ries, Bernard, David and Janet Leaches, John Wards and many others, including several of his and a Barbara Hepworth macquette he presumably purchased at the same time. I helped the curator, Fiona to unpack and catalogue them, a few days I shall never forget! It was really humbling to handle his collection, I really got a sense of him, hope they go on display soon!

Looks like there is also a connection to Torquil, Henley-in-Arden, or maybe he just
used it as a retail outlet? 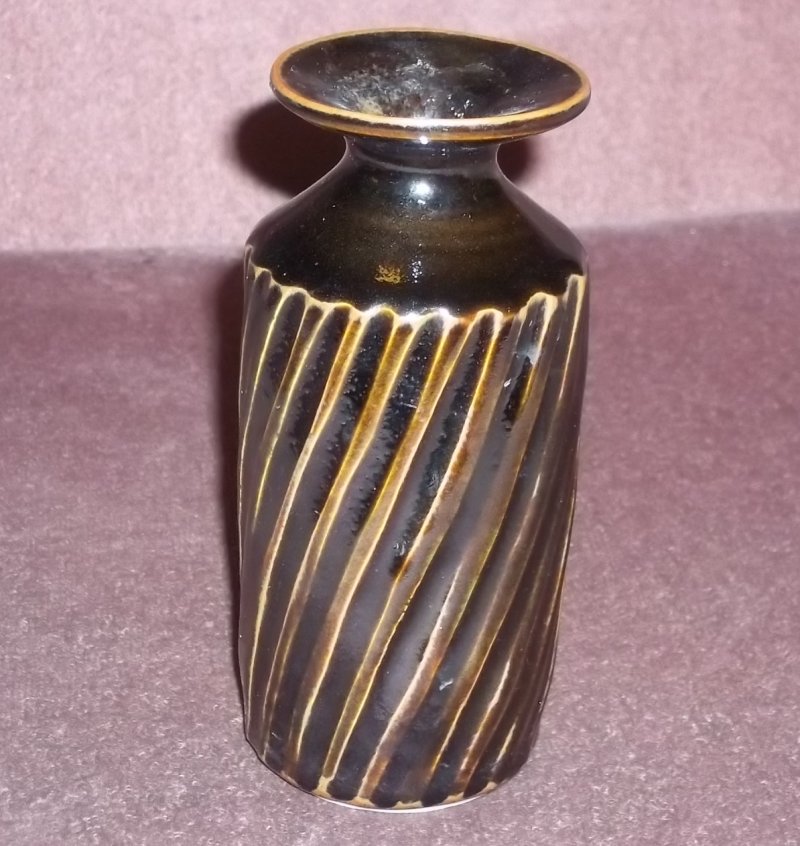 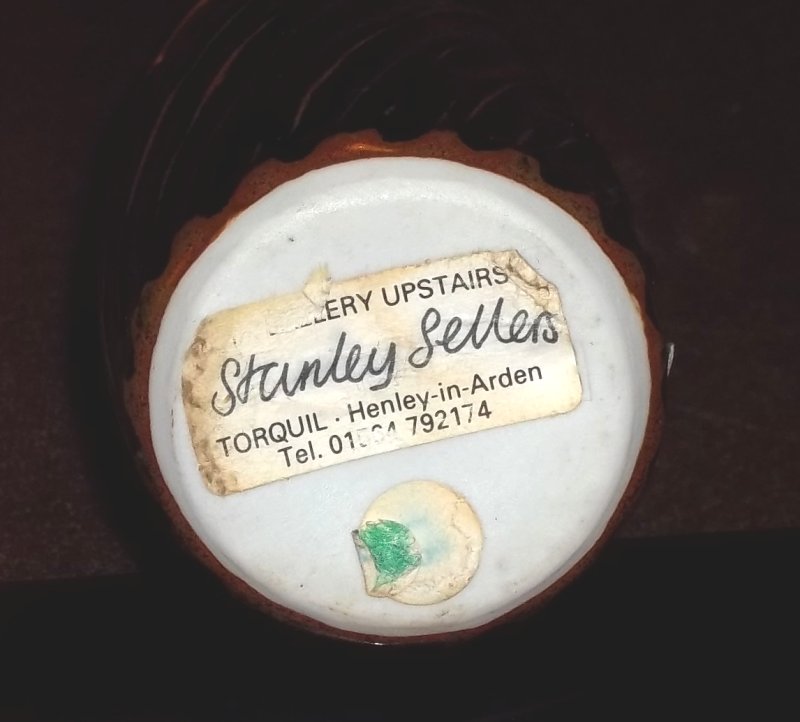 Peeling the label back, there is a small SS in a square, impressed. 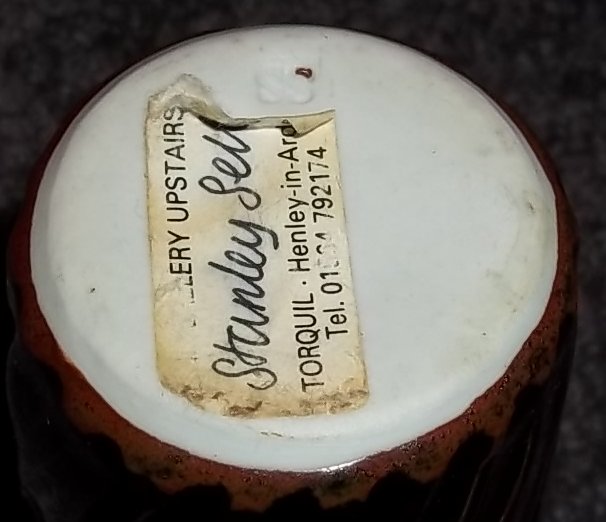 Reg Moon, who potted at Torquil Pottery, had an exhibition space above his workshop where he held at least two mixed pottery exhibitions every year.
_________________
Now you should know by now that Potty and I need to see your bottom - we're funny that way!

Thanks SP, that's the connection then.

Much intrigued to see these posts about Stanley Sellers. His name has cropped up in research for a book I am currently writing, in which his friend the sculptor John Milne (1931-78) is the central figure. Stanley used to stay with John Milne at his house in St Ives, 'Trewyn', which is immediately behind what is now the Barbara Hepworth Museum. The link with Reg Moon and Torquil/The Gallery Upstairs would I'm fairly sure have been through John Milne, as he and Reg studied together at Salford College in the 1940s and remained lifelong friends. 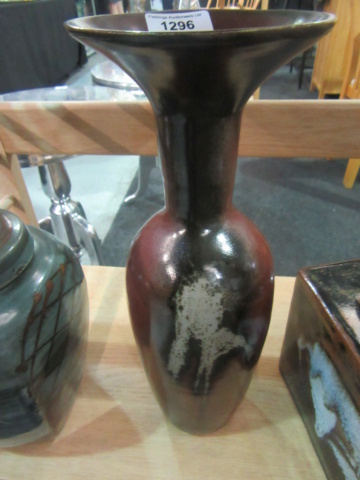 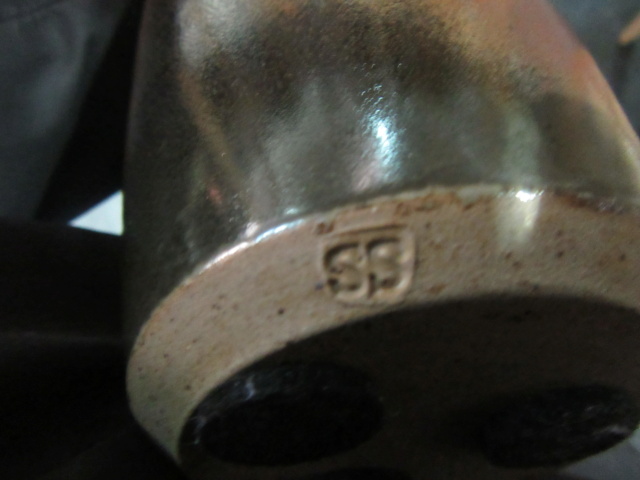 Judging from this piece, Stanley Sellars was an excellent potter in his own rights.