any informations on this beauty? might be made for cigarettes....?
aint got the hill book yet.... (it's far too less caithness around in germany anyway)
can't find it searching the web.... or is the teak lid not for this vessel? 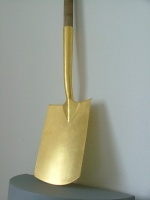 Designed by Domhnall ÓBroin in 1961, discontinued by 1972. Info from Caithness Glass by Mark Hill.

thanks john,
i do enjoy your help a lot and i certainly like it as well
it's quite difficult to find british glass and pottery on german fleamarkets

Domhnall ÓBroin was one of the first designers working in Britain to be so heavily influenced by Scandinavian design and glass making methods. It shows in this piece in it's simplicity as well as the teak lid (yours is just as it should be, they are described as "storage jar".). ÓBroin is probably an under recognised designer over here.