Jug was bought separately so I'll post the mark too

Dieter Kunzemann was born near Leipzig, East Germany in 1928. He trained and worked with his father-in-law, country potter Chris Harries, at Coldstone Pottery from 1953-1967. In 1967 he started Evenlode Pottery in Gloucestershire. He is known for producing domestic and decorative slipware, mostly with wheatear decoration and using green, yellow and black glazes. [Died in 2011].

1967-1968 The Coldstone Pottery, Ascott-under-Wychwood near Woodstock, is where I really learned to make pots in production sequences. The clay was 2 parts St Thomas's and one part local yellow clay which gave the fired pieces a mellow pink body colour rather than the stark terracotta of Stoke red clays. It was all slipware so there was a high attrition rate through collapse of greenware. Coldstone was characterised by crossed-wheatear decoration and what Chris Harries used to call "matchstick" as on this bowl [see blog]. Both difficult to do well. The glazes were lead-bisilicate transparent and Chris kept his recipes in a safe!! Coldstone was an idyllic place and something to which I aspired. It was watching the thrower, Dieter Kunzemann, who preceded my time there which turned me on to wanting to be a potter.

Hi all. Hoping the combined knowledge here can help me ID a few makers of some pots I've acquired.

First up is this terracotta vase glazed in chocolate brown slip decorated with a cream wheat ear design.
Based is impressed with pg and also has an unusual pattern or monogram that appears to written in black oxide.

Any help will be much appreciated
Thanks

Several potteries used the wheatsheaf slipware pattern. The most commonly found pieces were by Dieter Kunzemann and associates at the Evenlode Pottery and Coldstone Pottery, but it's not their mark.

Philip Gardiner, Mevagissey, has done traditional slipware in the past. His backstamp is now PG rather than pg but it might be an early piece.

Edited: Another piece has turned up with this mark, and appears to be Coldstone Pottery so merging with that thread, although it's possible it's by James Brooke or similar 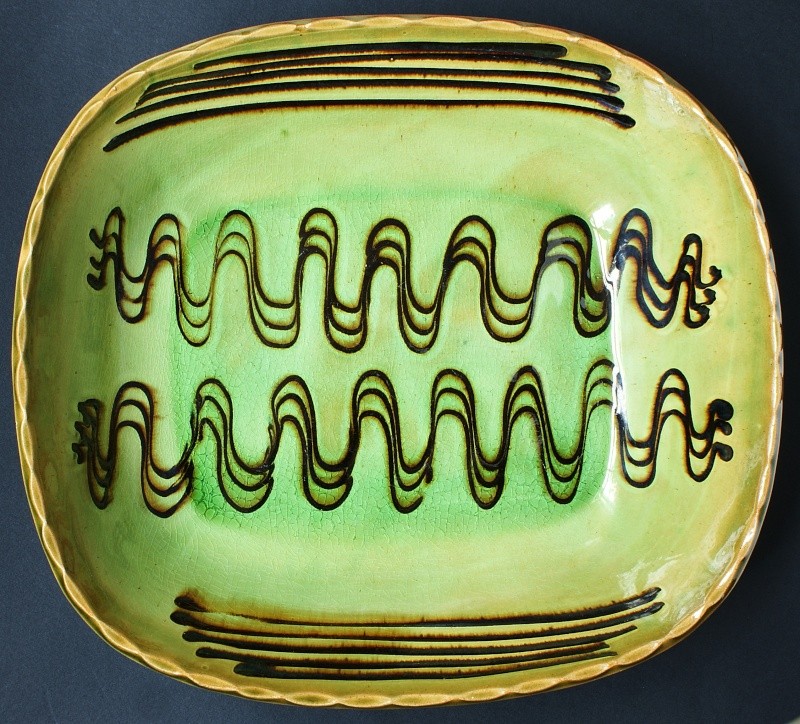 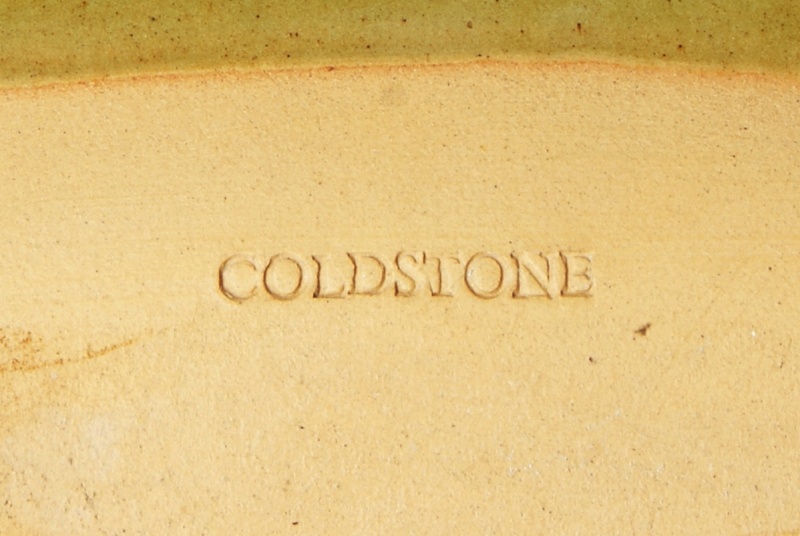 Hi
This dish has an impressed mark , but I think it's incomplete.
Any ideas would be welcome . I've been through the book but unable to find anything similar. 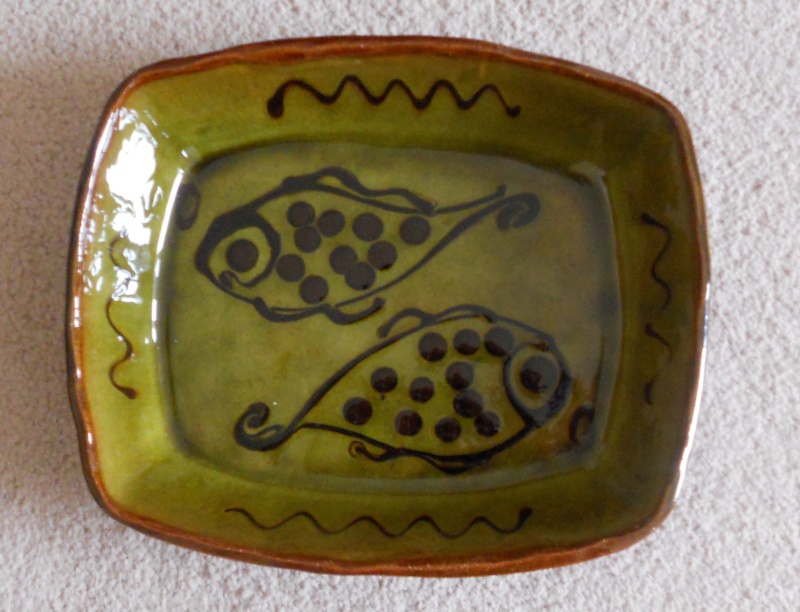 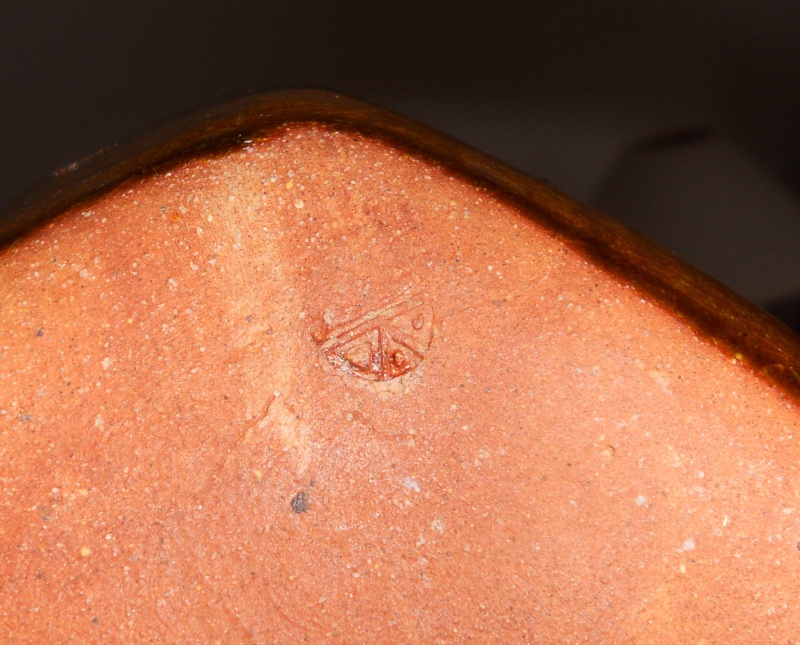 Thanks for that Davee

I have just seen a couple of items that at first glance appear to be by DK , this time with a wheatear decoration. However the mark isn't the same so my questions are did he ever have a different mark or are there any known potters who use the wheatear deco??
Ta muchly

The wheatear is a traditional style of decoration that has been used for centuries.
_________________
Just my personal opinion, take it or leave it. 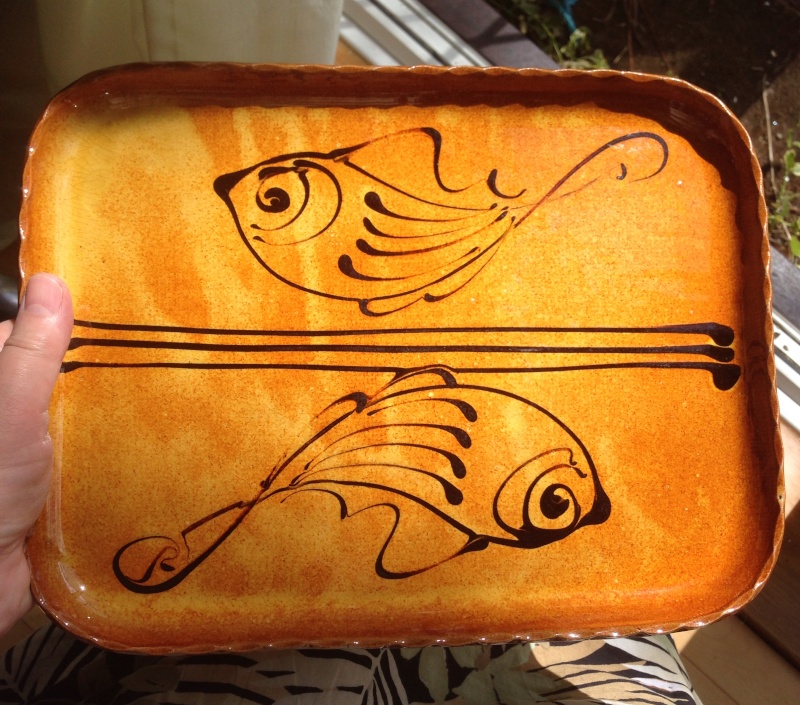 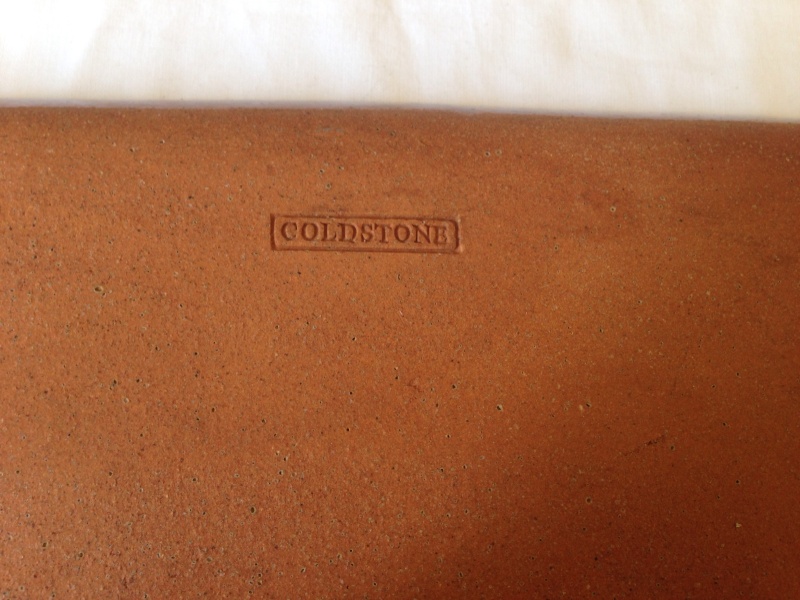 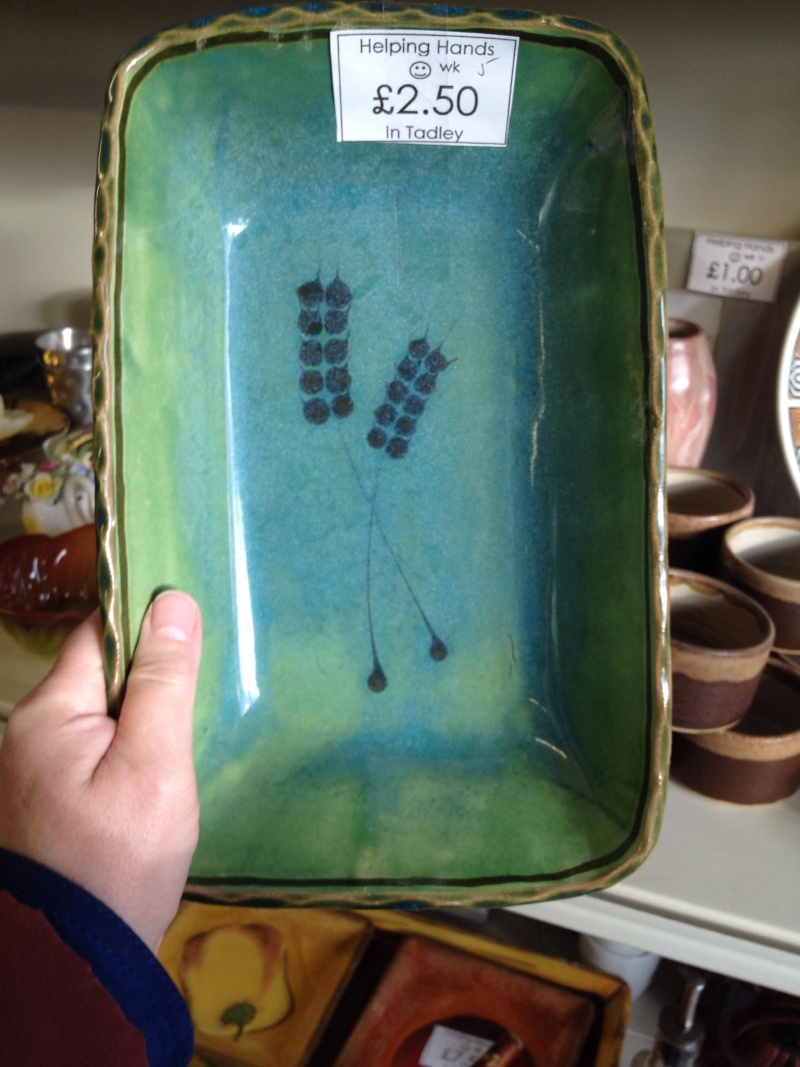 This is a large dish with the typical wheat decoration and the body is typical Coldstone. I have seen this mark being sold as Coldstone but I've not been able to identify it. Any thoughts anyone? There are no other impressed marks on the dish.
Ian 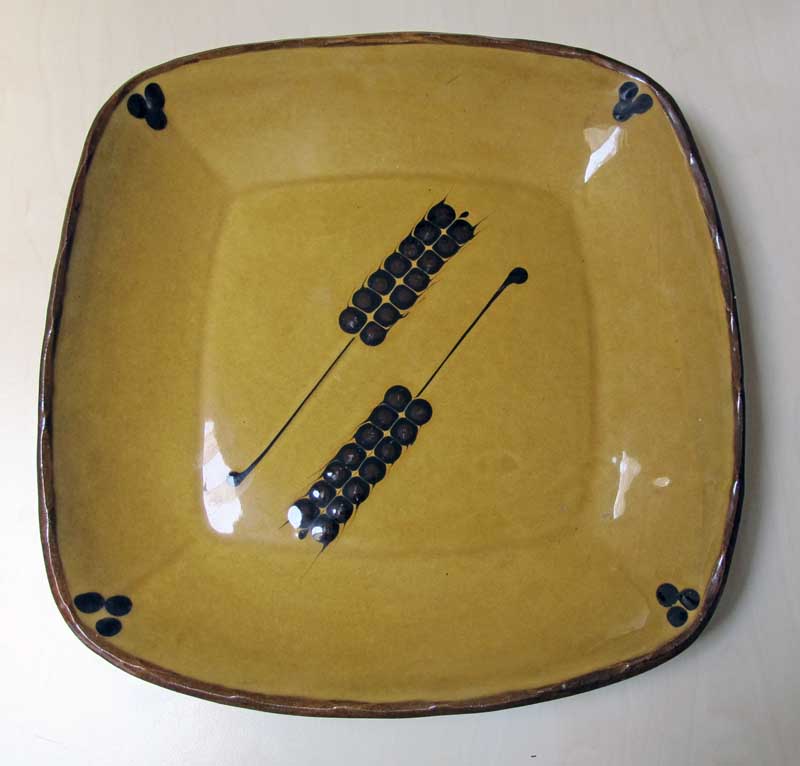 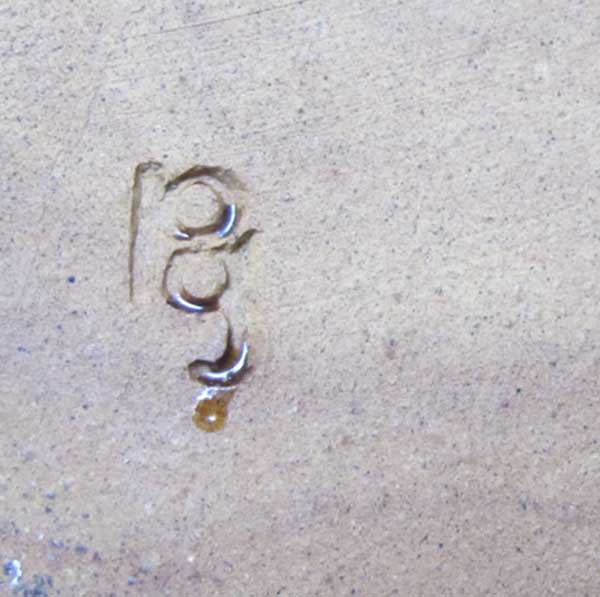 It is one of their shapes and patterns, but I don't know why it's stamped pg. 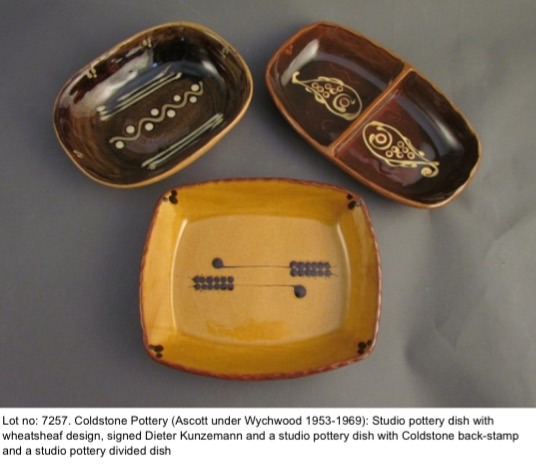 That's a great match, so it's definitely Coldstone, so it's reasonable to assume then that the dish was made by one of the other potters (as yet unidentified) who worked there over the years.
And of course, as with all these potteries, the person who made the pot wasn't necessarily the person who decorated it.

Marbled clay egg cup with wheat ear slip decoration.
Not his usual style of DK mark but pretty sure it's an early Dieter Kunzemann 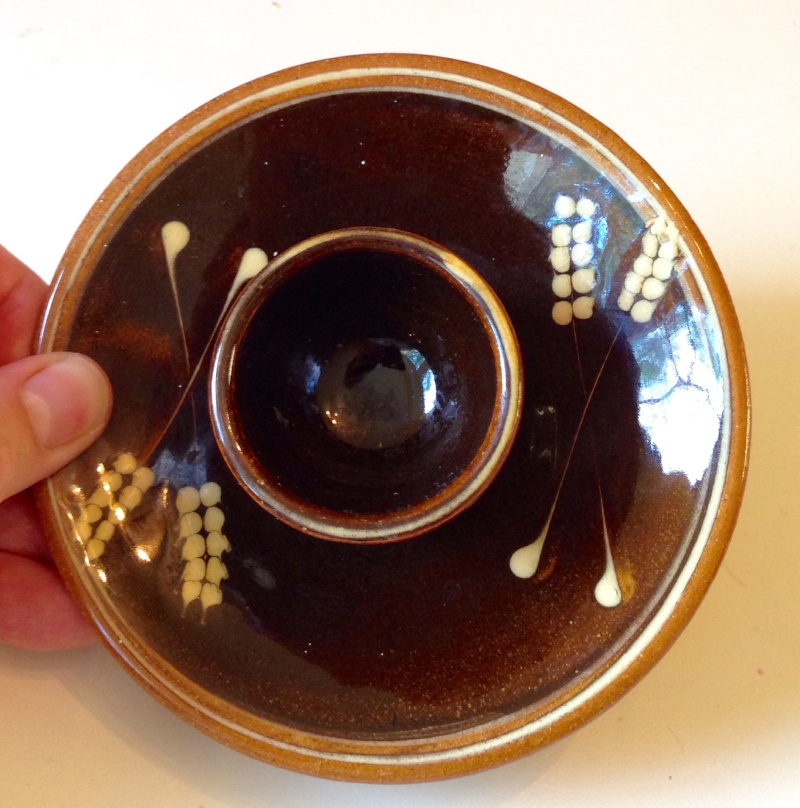 Definitely Evenlode: I attach a photo of my childhood eggcup bought at Evenlode in the mid-seventies. 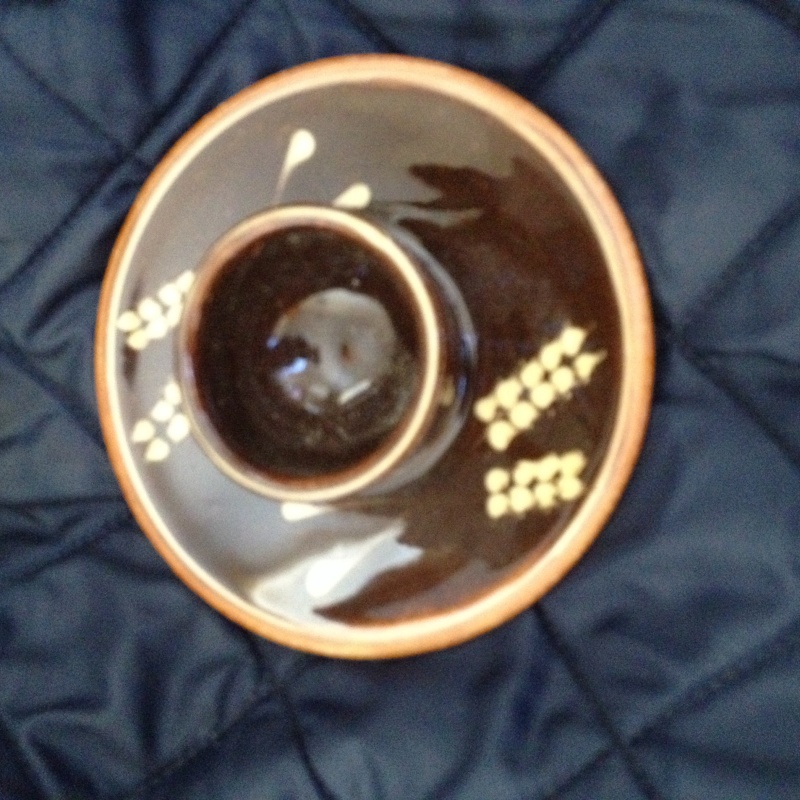 I have one with a green glaze and we used to have a golden-glazed one like the original poster's, all with the crossed wheatstalks.  I used to live in Kingham as a boy and would pass Evenlode Pottery when I cycled to Morton-in-Marsh (where there was and is an excellent toyshop). I stopped in there about four years ago. The pottery had closed as Dieter had died, but by chance his daughter was there. She told me that Dieter had been a prisoner-of-war in England, fell in love while he was here and took up pottery as a student of his father-in-law. I picked this up yesterday with some other pieces while clearing my late my mother's house.

Examples of Dieter Kunzemann's marks; not all are in the Marks book -
Seems that Coldstone sometimes stamped an O behind or over the DK mark. Unknown why they did that

Also these two marks, which seem to be CK for Coldstone Kiln, one also bears Mick Dixon's mark 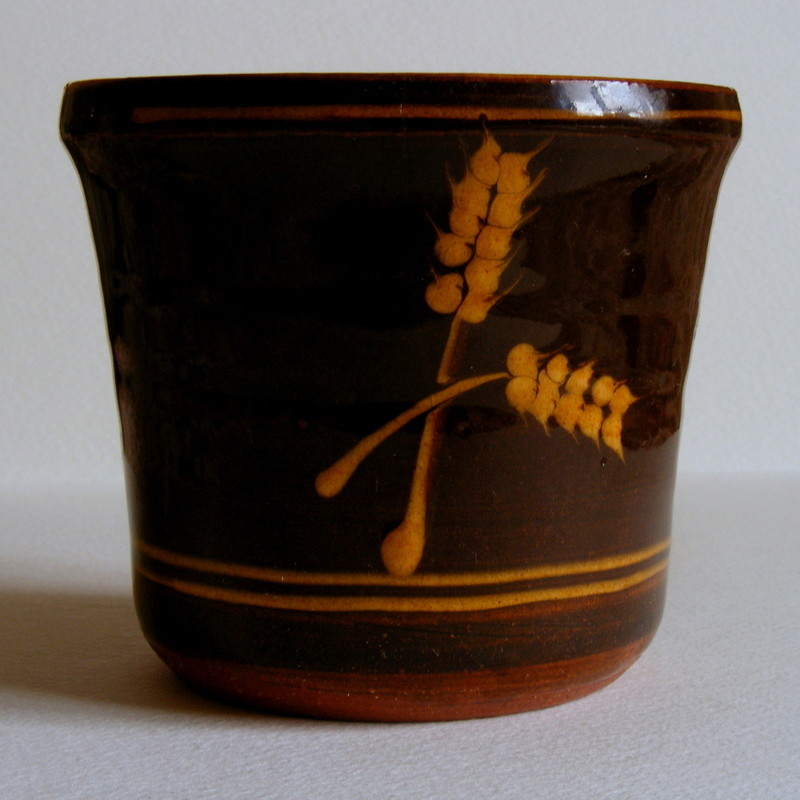 A nice little dish by Dieter Kunzemann. The shape, colour and decoration all seem to complement each other perfectly. 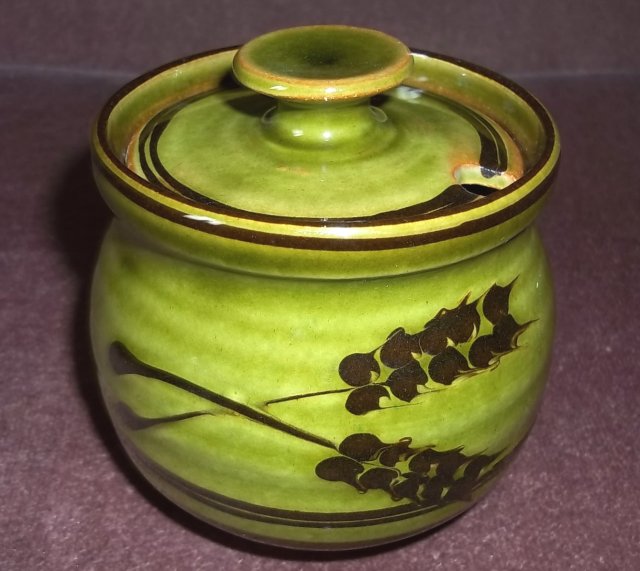 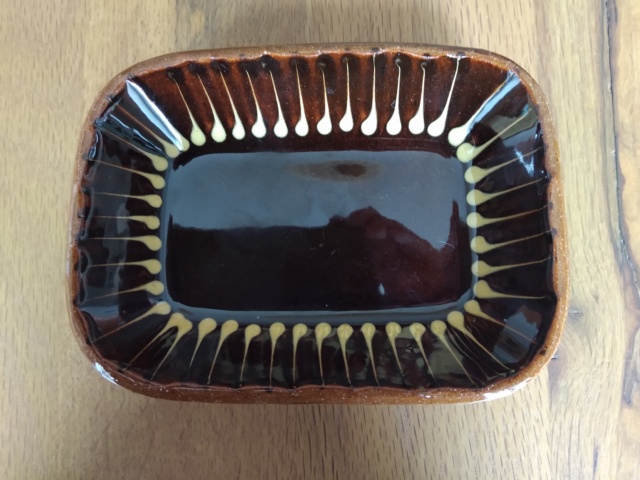 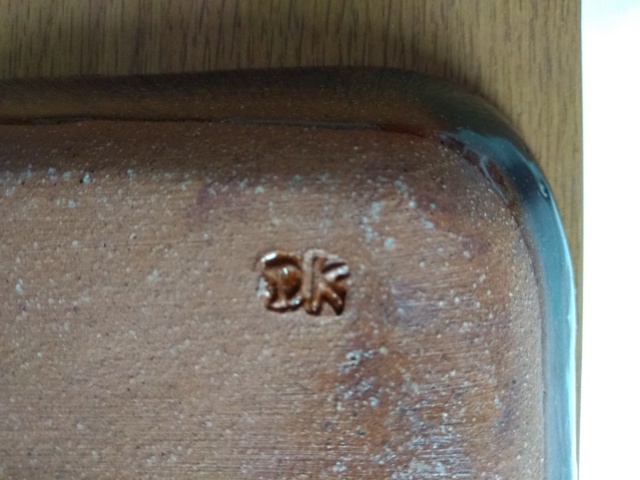