Here's tonight's pot from my collection. I've had it for years and have no idea how I came by it. It's only recently that I realised who it was by. The tazze is one of his characteristic shapes so even though it's not marked it's instantly recognisable as being by 'the potters' potter'. I believe he has a show on in Bath at the moment. 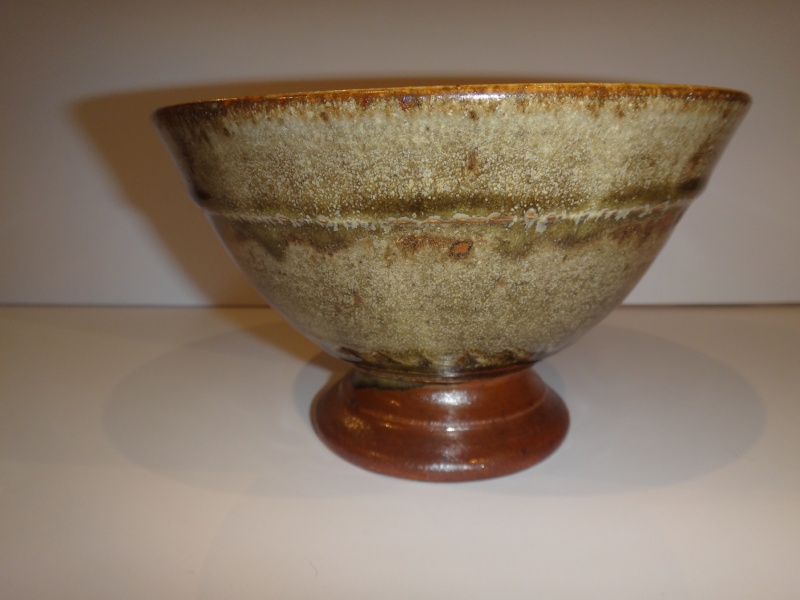 There isn't a great deal of variety, as he makes a limited number of items and the shapes have stayed the same or with slight changes over the years. His glaze range too is limited.

These are all his decisions and he is happy to tell anyone that he is not an exhibition potter.

Having said all of that I have owned a bottle similar to the one above since I got engaged (the wife had a ring instead) and I have never tired of it.

To my mind his work is far superior to any of the other potters making ash glazed stoneware today.
_________________
Now you should know by now that Potty and I need to see your bottom - we're funny that way!

In the days when I staged solo exhibitions, a potter would provide me with around 60 or so items of new work and to make it interesting a potter would make and select a variety of forms and glazes.

Richard has never had any interest in doing that. He makes what he wants to and has never tried to pander to what you, I or anyone else wants.

I remember some years ago being asked by one of my customers, who collected yunomis and teabowls, if I thought Richard might make some and I told him that he could ask him if he wished but I was certain that the answer would be "No". He did and the answer was a "very positive No".
_________________
Now you should know by now that Potty and I need to see your bottom - we're funny that way!

I have found some variety - a salt glazed large beaten bottle!!

He slaps them about after throwing to make them slightly angular rather than a smooth curve. He doesn't always do that but it seems as if I tend to like them that way.

He's fairly new to salt glazing and isn't always happy with the results but some do turn out rather well. His son, Reuben, taught him.

While on the subject of Reuben, it might be worth pointing out that some of his pots are similar to his father's and he uses an RB impressed mark. On occasions I have seen these being sold as "Richard Batterham's early work".

The only marks that are found on Richard's work are incised clay body codes or glaze codes in ink and then only rarely.
_________________
Now you should know by now that Potty and I need to see your bottom - we're funny that way!

A cut sided jar with a celadon glaze.

A thread on Richard Batterham with hardly any pictures!
30 cms. 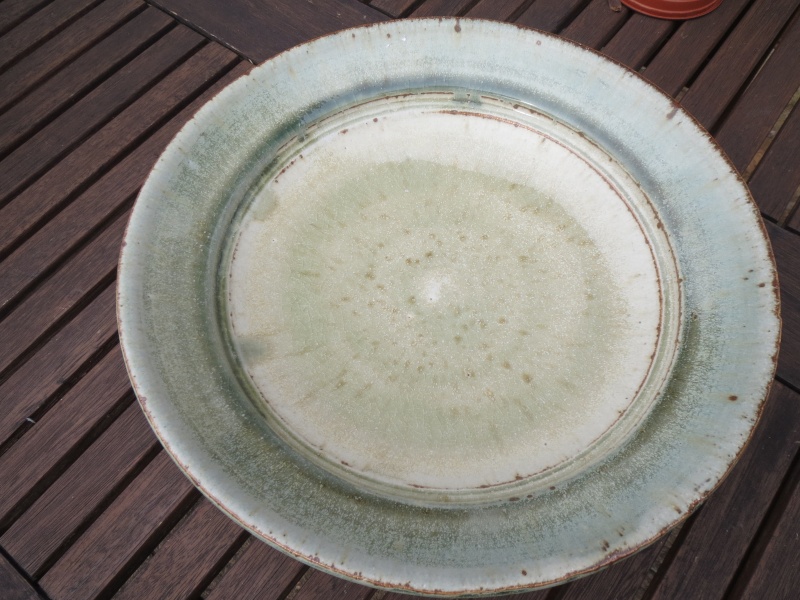 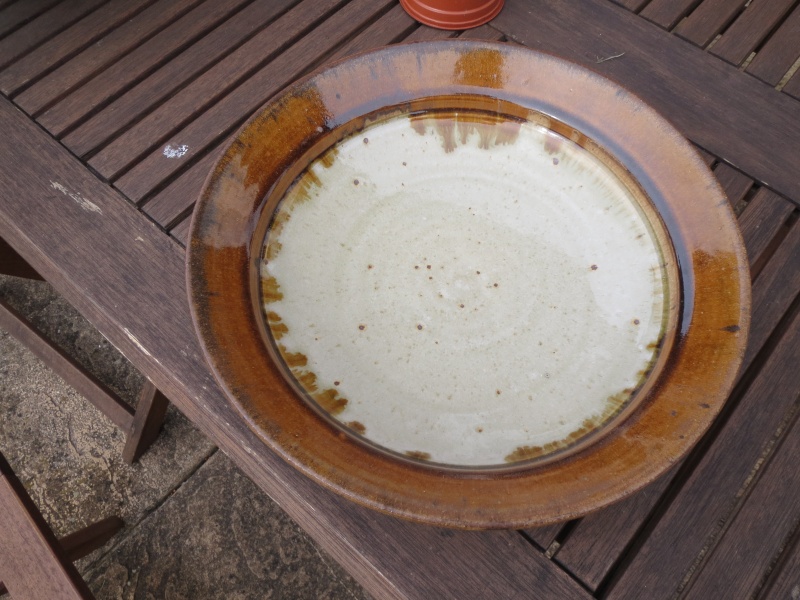 He sure does a wonderful teapot.And this shape comes in several different sizes.This 23 cms from spout to handle end. 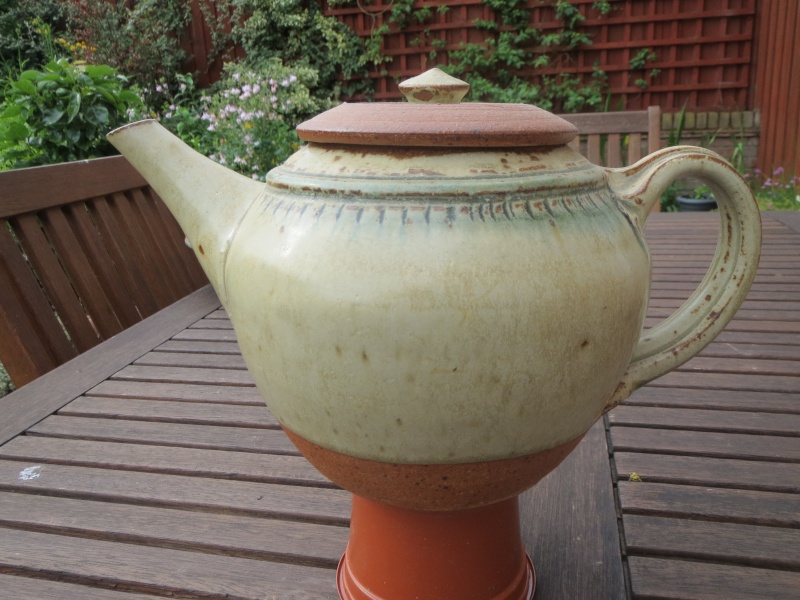 Coffee Mugs? Now this is where his non-marking can get tricky.I picked these up in a charity shop for a couple of quid a few years ago. To me,stylistically,they look totally kosher.But....I will always have that slight niggle of doubt:happy2:.
What do YOU think? 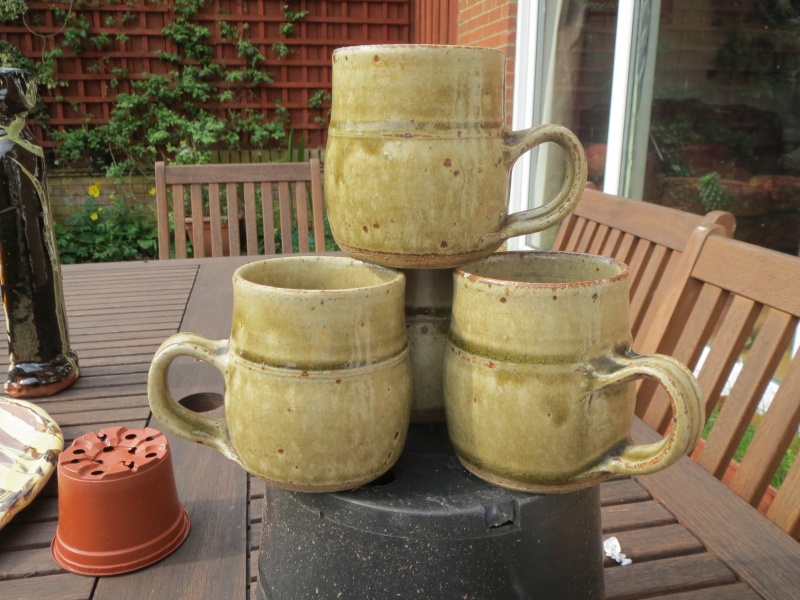 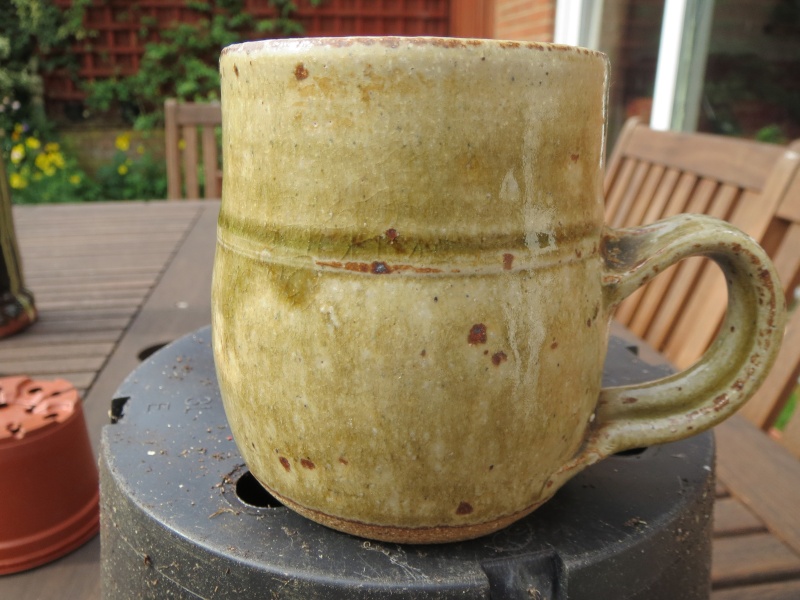 Now this one is probably amongst my all time favourites of studio pottery that I and my wife have,and we have had it for many years.
The cut sided bowl is probably Richard Batterham's trade mark.Such elegance,such balance.and ooooh such skill!
This bowl is 31 cms in diameter,and 19 cms high.Oh,and its Wonderful for making bread!.That's it with Batterham Pots.they cry out to be used. 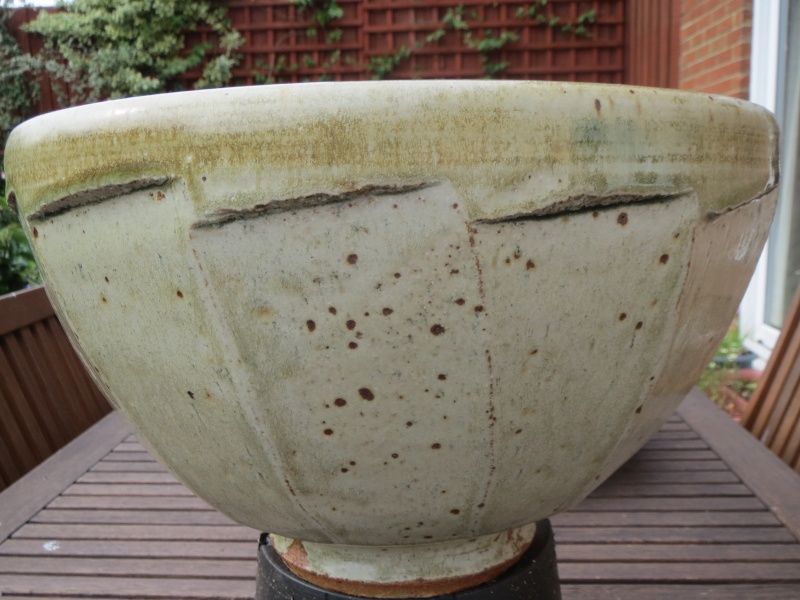 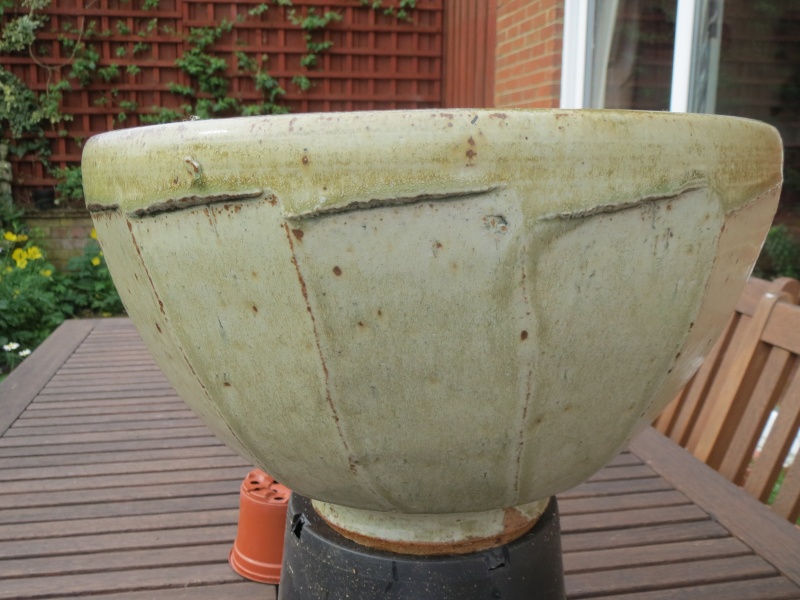 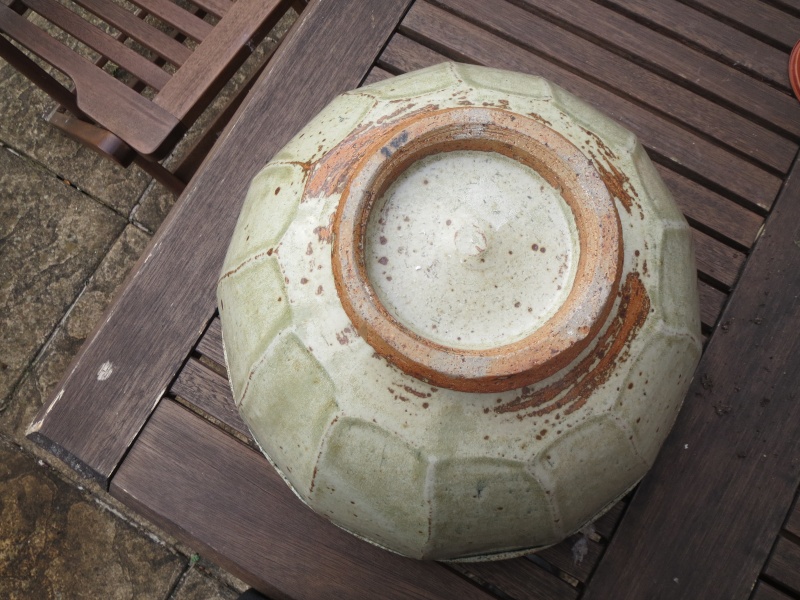 His pots sometimes have incised marks (denoting an experimental clay body) or an ink mark (denoting a glaze recipe) but if you come across a pot that looks like Richard's with a RB mark then it is most likely a "Batterham" but by his son ,Reuben. He did mark very early work but only for a few years. Although it will be some around, I have never come across a piece.

studio-pots wrote:He's fairly new to salt glazing and isn't always happy with the results but some do turn out rather well. His son, Reuben, taught him.

After exchanging emails with Reuben today, he gave me more background to this. However, I ought to make it clear that my original statement was based on what Richard had told me during conversations I had with him.

It appears that Richard first tried salt-glazing with John Maltby around 1976/7 in John's kiln in Devon and then built his own kiln with the help of Thiébaut Chagué at his own pottery in 1978.

I knew from my conversations with Richard that he had had a salt kiln for a long time but he told me that he wasn't happy with the results so did no salt glazing for years.

It appears that the first time I ever saw any salt-glazed pots at Richard's was in 2003 and it was then that he said something along the lines of Reuben having helped him with some salt firing and shown him how it should be done.

Reuben's take is that they worked out a few things together, ending with "I didn't teach the master anything".
_________________
Now you should know by now that Potty and I need to see your bottom - we're funny that way!

Hi, no mark, other than what may be a 3 or an E. Could this be a piece by Richard Batterham, or am I undergoing a case of wishful thinking?
Many thanks. 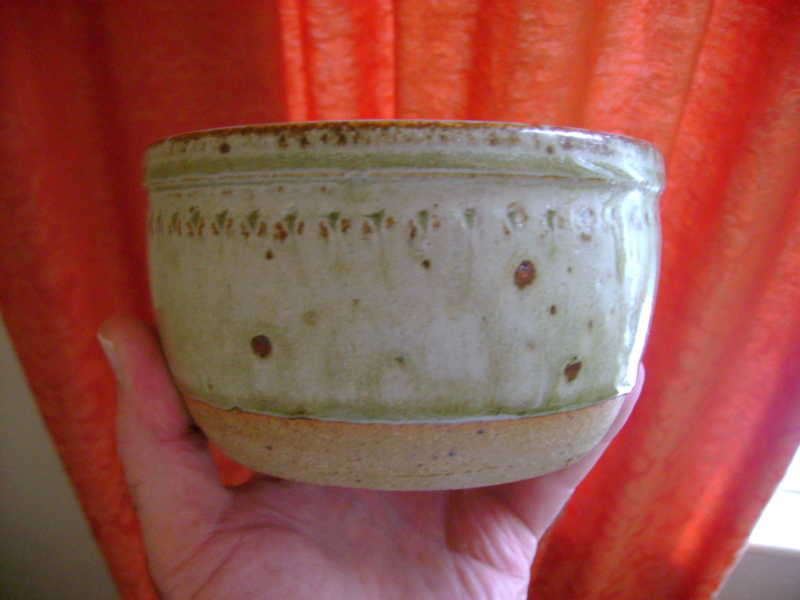 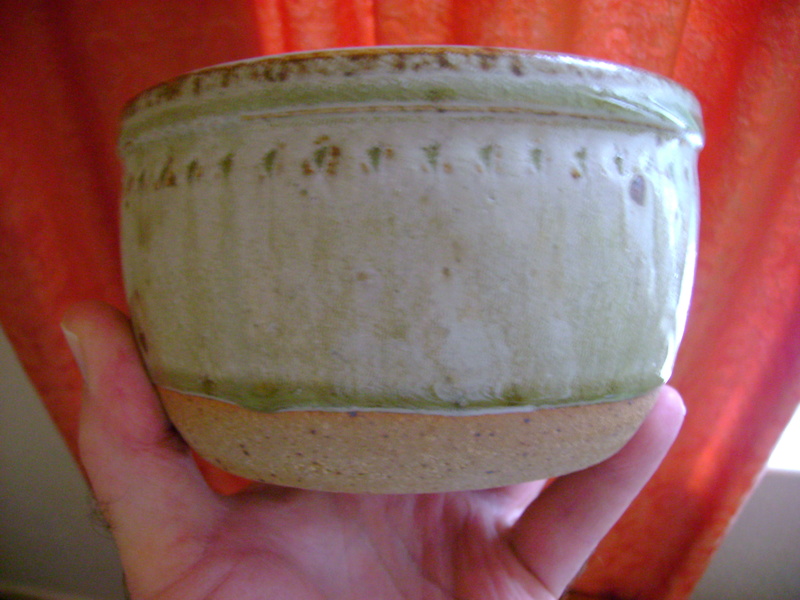 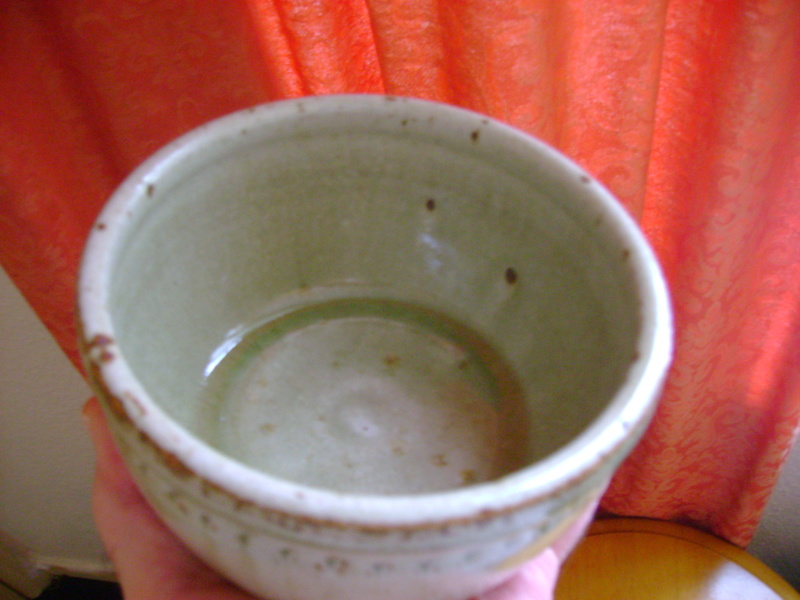 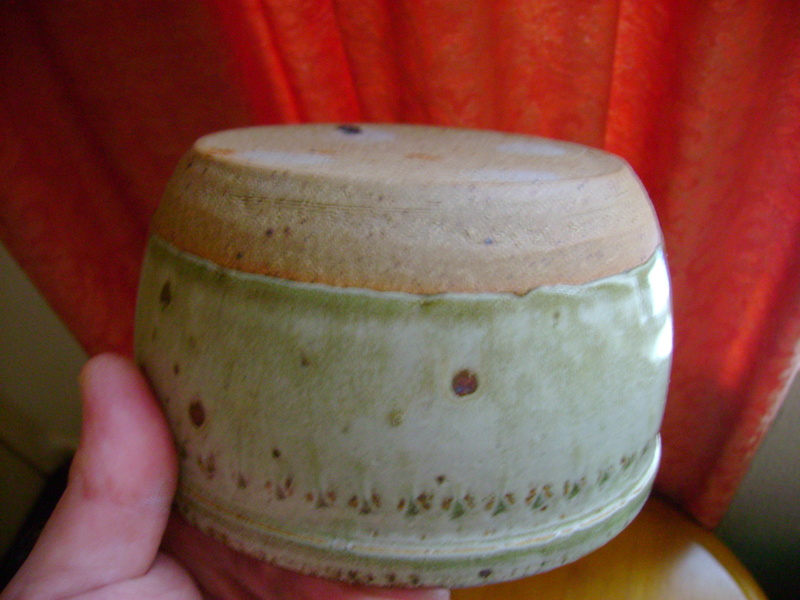 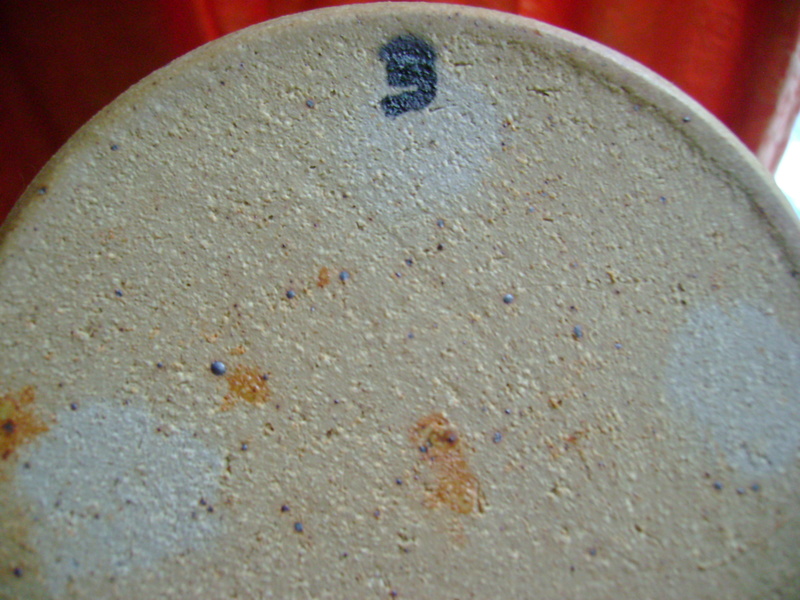 I do not think so. The glaze is right and the stoneware is right . But that is about it. That fancy X decoration around the top edge. That is not Richard Batterham. The shape is not really his either. I've never seen this sort of chawan shape by him. Plenty of soup bowl type shapes, but not this high sided chawan type. He has always done a very limited number of shapes, extraordinarily well. But don't think this is one of them.

That's a shame, I was hoping I had nailed this one. I found a near identical one on pinterest and another similar one elsewhere, but not to be.
Thank you for the feedback folks

It could be Mike Dodd, who doesn't always mark his domestic ware but the mark (one of his glaze codes) and the shape make me feel that it is very likely to be by Richard.
_________________
Now you should know by now that Potty and I need to see your bottom - we're funny that way!

Thank you studio, much obliged.

Yup, it's right for Richard Batterham. There are quite a number of his pots on google and Pinterest with this shape, glaze and decoration - which I think is a v rather than an X -  (the taller ones often lidded)
_________________
Carrot cake is just fake cake

A couple for comparison -

Thank you Naomi, much appreciated.
I have found a fair few others and am now confident it is one of his.